You know an Aries man doesn’t love you when he wants to do things without you. He loves to go on adventures, and he loves to have fun, but when he doesn’t want you to be a part of it, you know he doesn’t love you. He can choose to include you in on his spontaneous activities, so if he chooses not to, it’s probably not love.

You know a Taurus man doesn’t love you when he doesn’t open up to you. When you’ve earned his trust, and shown him you have no intention of breaking his heart, and he continues to be closed off, it’s a sign that it’s not love. A Taurus man will be reluctant to be vulnerable, but love will make him cross the line that causes him to share his entire life with you.

You know a Gemini man doesn’t love you when he seems distracted. If he can’t make it through a meal with you without checking his phone, the love just isn’t there. A Gemini man in love will give you all of his attention. He’ll make you feel like a priority, rather than an inconvenience, and he’ll actively choose to love you every single day.

You know a Cancer man doesn’t love you when he’s hesitant to introduce you to his family and friends. His family and friends are basically the most important things in the world to him, and if he doesn’t bring you around them, it means he’s not confident that they’ll a) approve of you, or b) like you as a person.

You know a Leo man doesn’t love you when he’s quiet around you. Leo men are usually pretty outgoing and love to be the center of attention, if he’s not making himself noticeable when you’re around, it means he doesn’t particularly care what you think of him, or if you think of him at all.

You know a Virgo man doesn’t love you when he’s an open book. A typical Virgo man is not transparent when it comes to love. You won’t ever really know if he loves someone because he’s so private about his feelings. When he tells you anything and everything about what he’s thinking and how he feels, he’s not in love.

You know a Scorpio man doesn’t love you when he’s jealous of the other men in your life. A Scorpio man is naturally jealous, but when he’s with a person he truly loves, he learns to control that jealousy. It’s not love if he continues to question whether or not he’s the only man you love.

You know a Sagittarius man doesn’t love you when he can’t talk about the future. A Sagittarius man enjoys change, he wants to learn and grow and better himself, which means he has big plans for the future. When he can’t talk about those plans, it’s not love. If he only includes you in the moment now, and says nothing about what’s ahead, it’s because he doesn’t see you a part of it.

You know an Aquarius man doesn’t love you when you feel like you’ve only gotten to know the surface of who he really is. When an Aquarius man is in love, he gets deep. He shares his emotions and his beliefs, he shares things that you wouldn’t know just from looking at him. When he’s not in love, he’s on autopilot. He says what you like to hear, not what he really feels.

You know a Pisces man doesn’t love you when he’s distant. It’s blatantly obvious when a Pisces man is in love because he’s an over-the-top romantic. He’ll send you flowers at work, he’ll bring you soup when you’re sick, he makes his love known through actions. When he leaves you hanging, or isn’t fully there, you know he’s not in love. 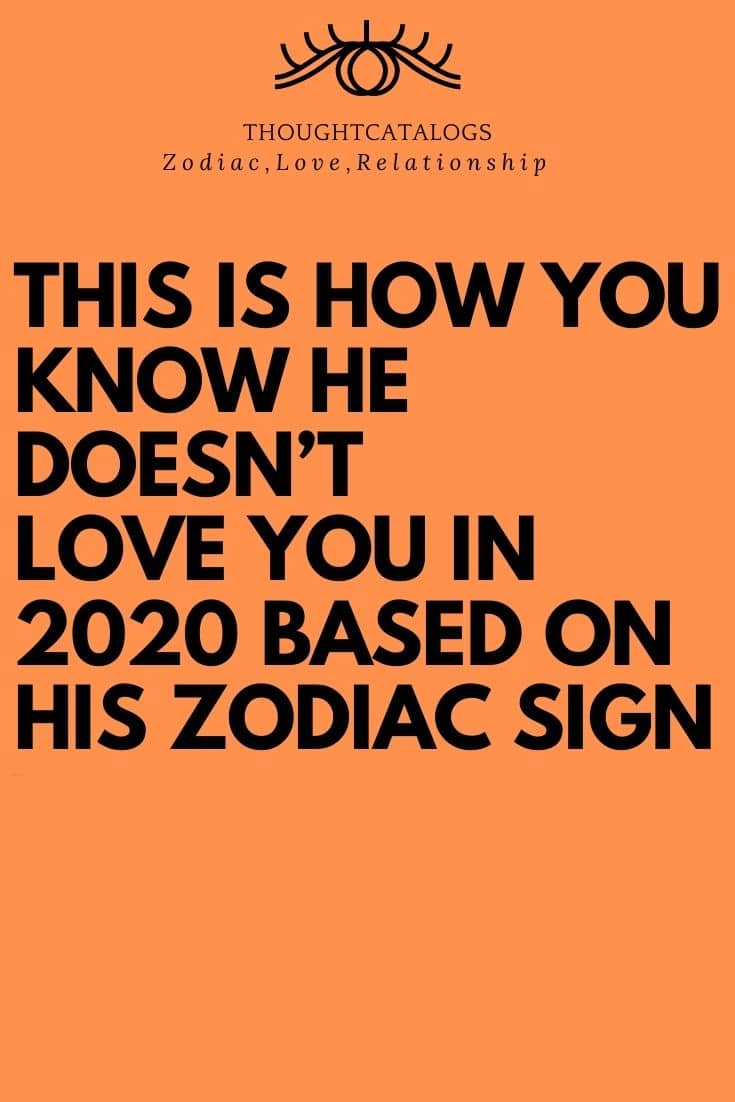 Aries: March 21st-- April 19th You like your self-reliance. You do not wish to confess exactly how good it would certainly really feel to drop...

This Is Why You Push Love Away In 2021, Based On Your Zodiac Sign

Aries (March 21st to April 19th). You push like away because you're too restless to play the game. You wish to know what's taking place between...

The ONE Thing Missing From Each Zodiac Sign’s Love Life

We all have an idea in our head of what our dream relationship looks like. It's the ideal that we're constantly striving towards and...

Monthly Horoscope July 2022 – Engage With Your Hearts, Based On Zodiac

This month will certainly concentrate on our understanding, of what we recognize as well as also just how we understand that. This is since...

The Major Goal You Should Have For The Month Of November 2021, Based On Your Zodiac

Aries ( March 21st to April 19th). Choose one tiny day-to-day habit-- as in, something that takes less than 5 minutes as well as is therefore...
𝐓𝐡𝐞 𝐭𝐡𝐨𝐮𝐠𝐡𝐭 𝐜𝐚𝐭𝐚𝐥𝐨𝐠𝐬 is an Educational & Entertainment Platform theme. Our Team Publishes 100+ Content On Weekend/Monthly. We will motivate the needs of any person & make them inspire instantly You, Will, admit Once You Begin Your Journey With Us. The Thought Catalogs platform is a perfect choice.
© Copyright © 2022 - All Rights Reserved | TheThoughtCatalogs.