Have you ever wondered how much of a badass you are? The answer is hidden within your Zodiac sign…

Your zodiac sign can predict anything from when your next relationship will happen to what kind of people you are most likely to be around. But now, using information from law enforcement officials, we can look into the birth date and zodiac sign of some of the most notorious killers. Using the birth date and other information from dangerous killers allows us to compile a list of zodiac signs, from the most badass, to the most calm and collected signs.

Aquarius, when it comes to serial killers and psychopaths, you do not have a lot in common. You constantly find yourself worrying about the state of the world, and always want to do the right thing. You are more on the innocent side of things, and would prefer to not see people get hurt unnecessarily.

Pisces are notorious for their deep thoughts, and their creativity. But when it comes to being a badass, they know exactly how to be one. Pisces have historically shared their zodiac sign with some of the worst serial killers, so naturally they may find themselves making some uncomfortable zodiac correlations.

Aries may be known for their hot temper, but that does not always mean they are going to go 100% badass on you. Aries may be mad enough at you to call you out, but they wont attack you in your sleep. Aries find themselves with the right amount of balance to call out the injustices you see, but enough self-restraint to evaluate the situation before flying into a rage.

Taurus’ have an entirely different badass skill set than others. While other badass signs may be focused on their revenge, Taurus’ find themselves plotting and scheming to see what they can get their hands onto next. Taurus’ have more in common with those who commit fraud, than those who commit murder.

Gemini’s are known for their logic, and their need to understand things fully, before they partake in the event. Due to their need for rational explanation, their zodiac sign is the most likely to be calm and collected during the heat of a moment. Gemini’s are definitely badasses, but in their own, unique way.

Leo’s are known for their dramatic personality, however just because they have a thing for drama, doesn’t necessarily make them hardened badasses. Leo’s have their own way of going about things, though they have a knack for getting the attention of those they really want to. Leo’s are not the most inclined to partaking in violent acts, but when they do, they certainly know how to do it, and capture all of our attentions while doing it.

Virgo’s are astrologically related to some very interesting characters, and when it comes down to criminal activity, Virgo’s have some pretty interesting skill-sets. While Virgo’s have an affinity to commit crimes, they are most likely to fall under the category of robbery and fraud. Luckily for all of us, Virgo’s seem more focused on scamming us, and that is an entirely new type of badass.

Libra’s are a blend of sassy and sweet, but don’t let this unique combination fool you, Libra’s don’t have any tolerance for those they feel are just using them. Libra’s often feel that they are taken advantage of, and because of their unique insight, they are able to turn their sweetness into badass, very quick.

Scorpio’s tend to have a bit of a ruthless personality, they know what they like exactly, and what they don’t. Because of their strong personality, Scorpio’s can sometimes be a little intense, which can lead to some conflicting opinions. Then intensity of a Scorpio is unmatched and their badass personality can be just as intense and scary.

You are a real badass. Sometimes you can even take it a bit too far. You are one of the most badass signs on the list and people should remember not to mess with you. A Sagittarius isn’t someone you should take lightly and they can have a serious dark side.

Capricorns are not inherently violent and they’re not necessarily badass. However, when you push a Capricorn too far they can be known to take things to the next level. A Capricorn refuses to be pushed around and they can get vicious when they feel like they have to. 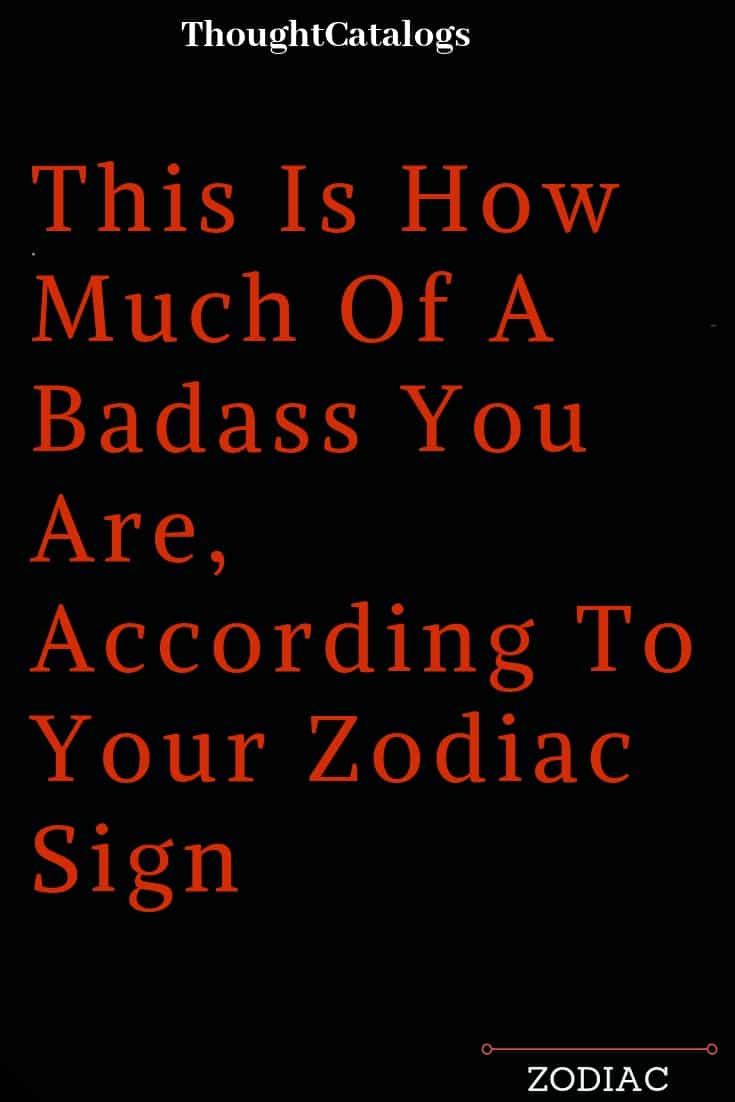 Because Of You, I Lost Myself

Your “I Will Love You Until..” According To Your Zodiac Sign