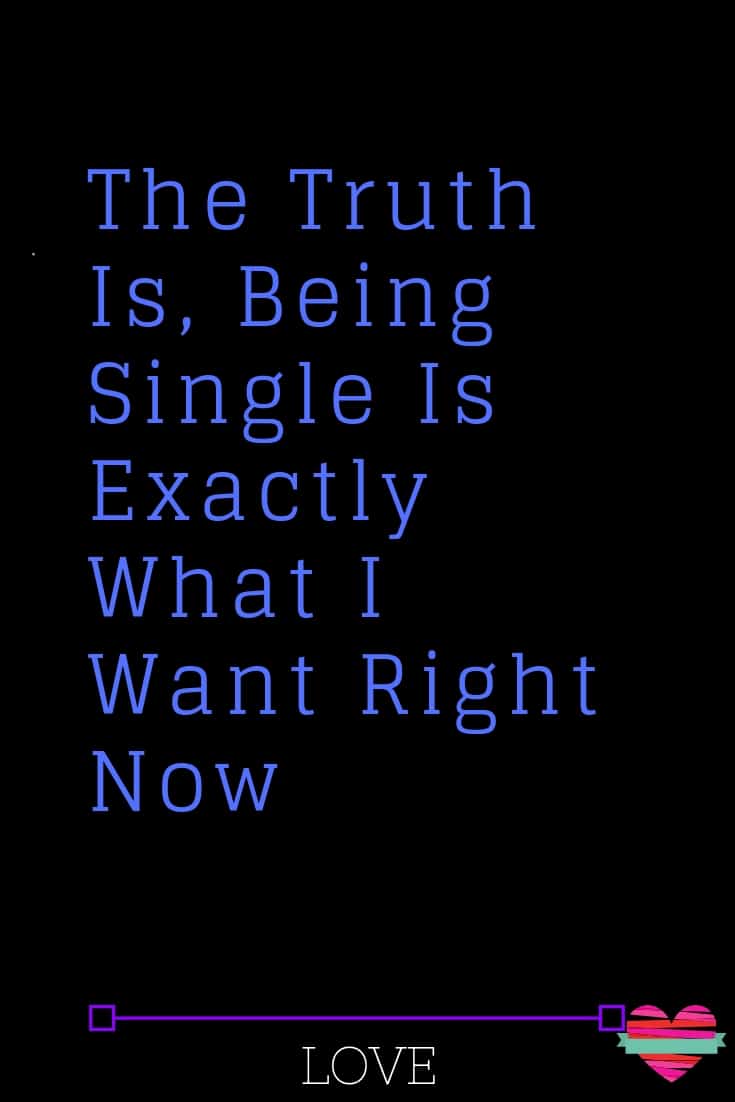 Facebook
Twitter
Pinterest
WhatsApp
The truth is, being single is not so bad. Once you realize that, the rest is an easy game. Sure, you’re probably fed up with the constant pressure, especially if you’re pushing thirty like I am. People are constantly inquiring why you are single—like that’s something terrible. They are probably secretly thinking that something is wrong with you. No one gets that you simply don’t want to settle for less than you deserve. No one gets that you actually want a real man, someone who lives up to your standards. So what if those standards are maybe high? They are high for a reason.   So here you are, smothered by the questions of your relatives and your friends as to why you’re still single. Even if you try to explain it, they’ll label you as a ‘you’re picky and you’ll die alone’ kind of gal. I say, let them! As long as you are satisfied with your life and as long as you have goals and standards you stick to, you’re good to go. Don’t listen to anyone. Keep living the way you’re living, and be happy about it. Just smile and show them that their nosiness doesn’t affect you. At. All. Let them ask millions of questions. Let them try to intrude in your privacy, but as long as you keep nodding to everything they say and smiling, you’re not going to give them the satisfaction of revealing what goes on in your life. Because people like that are expecting you to open up to them and unleash your soul. They’re expecting to see you broken and alone. They want you to tell them how hard it is. But since it’s not that hard and you’re actually very happy with your life right now, they don’t have any material to work with. They don’t have anything to talk about behind your back and eventually, they’ll leave you alone. Being single rocks and you know it! I’m not saying to choose to be alone because it’s better. I’m just saying that you have to be happy anyway. Being in a relationship has its upsides, but being single has them, too. You’re free to handle your money the way you want to. You don’t have to talk about every single money-related thing to your husband or boyfriend. You can buy yourself anything that you want because it’s your money, and you only have yourself to look after.     You are free to treat yourself because you can. Once you commit to someone, that ship has sailed. Once you’re in a relationship, there is no longer ‘I’—it’s ‘we’. You can be focused on your dreams and your goals. You can build yourself as a person in the private and business worlds because you have the time to do so. All the focus of your life is on you, and you know you have the chance to enjoy the best of it. When you’re in a relationship, there isn’t much time to focus on your career, especially if you have kids, but also if you’re committed to that one person. Maybe sometimes you’d rather stay at home and work on being better at what you do, but when you’re with someone, you’ll use that time to spend with the person you love. After all, you’re responsible for yourself. You’re learning to be independent. You’re learning to handle your problems on your own without anyone’s help. And actually, you have to know how to be independent because not all of us end up with someone, and not all of us have constant support. So, by being single, you’re doing yourself a favor. You know how to live alone. And you’re kicking ass while you’re at it. There will be others, the same ones that are constantly pressuring you to get a boyfriend, who will pity you for being alone. But there is one thing they don’t get, but you and I do—we pity them for not being able to live by themselves. We pity them for not knowing how to enjoy life on their own.   Being in a relationship is not the best thing that can happen to you. It’s not something you should crave. It’s not something you should be sad about if you don’t have it. It’s something you can wish for, but it has to be the way you imagined it. Being in a relationship is beautiful when it’s everything you’ve asked for. Being in a relationship is beautiful when you’re with the man you’ve been waiting for. Otherwise, it’s not better than being single. Moreover, it can be so much worse to live with a man you don’t love and lead an unhappy life. That’s why I want to be single until I’m not, and I don’t care what others are going to say. Because, who says they are happier than me? Is it because they are in a relationship and I’m not? If it is, if these are the standards by which we measure happiness, then that’s complete BS.

6 Important Life Lessons After An Excruciating Break Up

This Is How To Get What You Truly Want In 2019, Based On Your Zodiac Sign

This Is How Soon A Man Says ‘I Love You’, Based On His Zodiac Sign

If You Don’t Want Me Now, You’ll Never Have Me

Here Is How You Say Goodbye To Your Forever Person

ThoughtCatalogs - July 19, 2019 0
Forever should never end. This shouldn’t be happening. Your heart shouldn’t be bleeding like this. This is one goodbye you never imagined saying. So...