Your intolerance. Though you are one of the smartest and most self-aware signs of the Zodiac – and a leader, through and through – you can struggle with being frustrated when others don’t immediately understand what you’re talking about, or share an opinion that you find to be self-evident. This is particularly true when it comes to your romantic relationships: you expect people to be something that they perhaps are not. The problem here is not that your partner isn’t exactly the person you want them to be at all times, it’s that you have an expectation that they should be the person you want them to be at all times. Your intolerance for their differences in opinion, thought and ideas are what’s holding you back from having the relationship of your dreams.

Your image. Tauruses curate their lives. Whether or not you realize it, everything that you do is subconsciously chosen with the express intent of either fitting into an idea or an image of what you think would look beautiful or seem impressive for your life. The one thing that’s holding you back from happily being with your forever person is how critical you are of what they seem to be on the surface, and how you imagine other people will judge you for it. It is a call for you to try to expand beyond just what you think would look best for your life, and focus on what you feel.

Your indecisiveness. The funny thing about Geminis is that it’s rare that they are indecisive about their relationships (they usually know when they love someone, and can commit with ease and happiness). However, it’s their “all over the place” demeanor in almost every other aspect of their lives that tends to hold their relationships back. When you come home with piles of work stress, friend stress, conflicting thoughts and feelings on big things, like where you want to live, or little things, like home decor, it’s exhausting to feel like you’re constantly on unsteady ground. Some time to “find yourself” is essential before you’ll really be able to relax into a life with someone you love.

Your tendency to over-react. Cancers are dramatic! But that’s what’s bound to happen when someone is so sensitive and takes everything so personally. Your habit of over-responding when something is going wrong is absolutely what’s holding back your ideal relationship. Your partner never knows when you’re going to be in a slightly off-kilter mood and end up exploding over something minuscule, or they fear bringing up issues to you because you generally have a low tolerance for stress, and could twist it to mean something that it doesn’t. Your emotionality is going to be part of your personality for your whole life, but you have to work on not exaggerating or inflating your feelings (they seem big, but the thing they are in reference to may not be… learn to be aware of this).

Your self-determination. I should start out by saying that there’s nothing inherently wrong with being self-sufficient and confident (obviously). However, it’s definitely a trait that Leos tend to take to an extreme, and it ends up interfering with your ability to peacefully coexist and learn to rely on someone. Here’s the (inconvenient) truth about relationships: they require you to be vulnerable. To trust someone else. To not always do everything for yourself and by yourself. This is at once the beautiful part of being with someone, and the scary part… but right now, to you, it only seems intimidating. Just know that the kind of support you can receive when you really open up to someone is exactly what you’re looking for. You can be an independent person and still build a life with someone; the two are not mutually exclusive.

Your paranoia. Your relationships are not anywhere near as complicated as you like to make them out to be. (Nothing is as complicated as it tends to be in your mind.) It’s not that you have one or two compulsive, scary thoughts now and again… it’s that over time, you start to worry about dumb things and then eventually, everything starts to really bother you and you start to over-react and self-sabotage what you really want because you don’t want it to hurt you first. (That was a long sentence, but it’s an important sentence.) You have to learn to just dial it back a little and let people be themselves. Not everything is your problem to take care of. Your partner is an adult. They can handle themselves.

Your ego. Now, now, no Libra is going to take well to hearing that their ego is what’s standing in the way of their love life (Libras love love and deplore seeming full of themselves) but god it is so true. Your perfectionistic, idealistic view on life is what’s really standing in your way right now. You so genuinely expect that your partner should be superhuman and flawless that anytime they show a sign of even a slight flaw or weakness, you are all but horrified. In fact, you might be a little afraid to move forward with your relationship because you can’t grasp why you guys argue sometimes, or why they aren’t perfect at everything. (News flash: it’s normal! You’re not perfect either!) Learning to chill out and recognize that it doesn’t all have to be “together” to live a happy and fulfilling life together is going to be the key for you.

Your fear of rejection. Well, you probably saw this coming. Scorpios, you make some of the best partners of all, but it’s your fear of being rejected or unloved that manifests as jealousy, anger, resistance or avoidance in your relationships. Yes, it’s scary, the idea that you could love someone with everything that you have and the sentiment isn’t reciprocated. However, that’s true for anyone who has ever loved anyone else. It’s not like you’re being specifically targeted as “not good enough,” you’re just overreacting to something that everyone has to deal with. Get out of your own way and go get the love you (so desperately) want.

The idea that you have to settle. You’ll be hard pressed to find a Sag who will want to willingly “settle down” even if they do meet the absolute love of their lives… and you’ll also be hard pressed to find one who won’t, because Sagittarians are actually mega romantics underneath it all. But here’s what you have to learn: you can still live the exact life that you want to live, and you can do it with someone you love. You don’t have to choose between “house and kids” or “travel and reading.” You can do all of that with someone who is likewise interested in that kind of lifestyle. The trick is finding that kind of person, and not just giving up before you’ve even tried.

Your need to control. You cannot fix other people’s problems for them. You cannot make someone love you if they do not love you. You cannot reduce yourself bit by bit to seem more palatable and interesting and not expect to be unhappy in the end. The reality is that your need to micro-control all of the outcomes of your relationships is what’s keeping you from really finding the right person to be with, and then being with them. You need to find enough confidence to know that you’re more than enough as you are, and you should find a partner who believes that, too.

Your quirks. As an Aquarius, what’s holding you back from your forever person is not that you can’t find them, or that you don’t know how to make a relationship work, rather that you tend to have a series of little odd quirks that make you feel “different.” In fact, feeling “misunderstood” is probably the thing that you struggle with the most in your relationship, to which you need to understand that your partner doesn’t need to be everything to you. They are not a replacement for your friends, your family, your fellow existential oddballs who want to talk about whatever topics you’re obsessively interested in at the moment. Your person loves you for these things, not in spite of them. It’s your own paranoia that’s holding you back.

Your tendency to be all over the place. Pisces, the biggest thing standing in the way of you and your relationship is the fact that you are just so unpredictable and undecided about life. When you’re with your partner, you’re talking about all these conflicting feelings you have, the projects you want to start and then stop, the countries you want to move to or visit, the people who you love and then strongly dislike… it’s all a lot for someone to take in. You need to get a little clearer on what you want in your life, and then commit to it. It’s only once you’re walking down one path that someone else can walk beside you – and actually keep up. 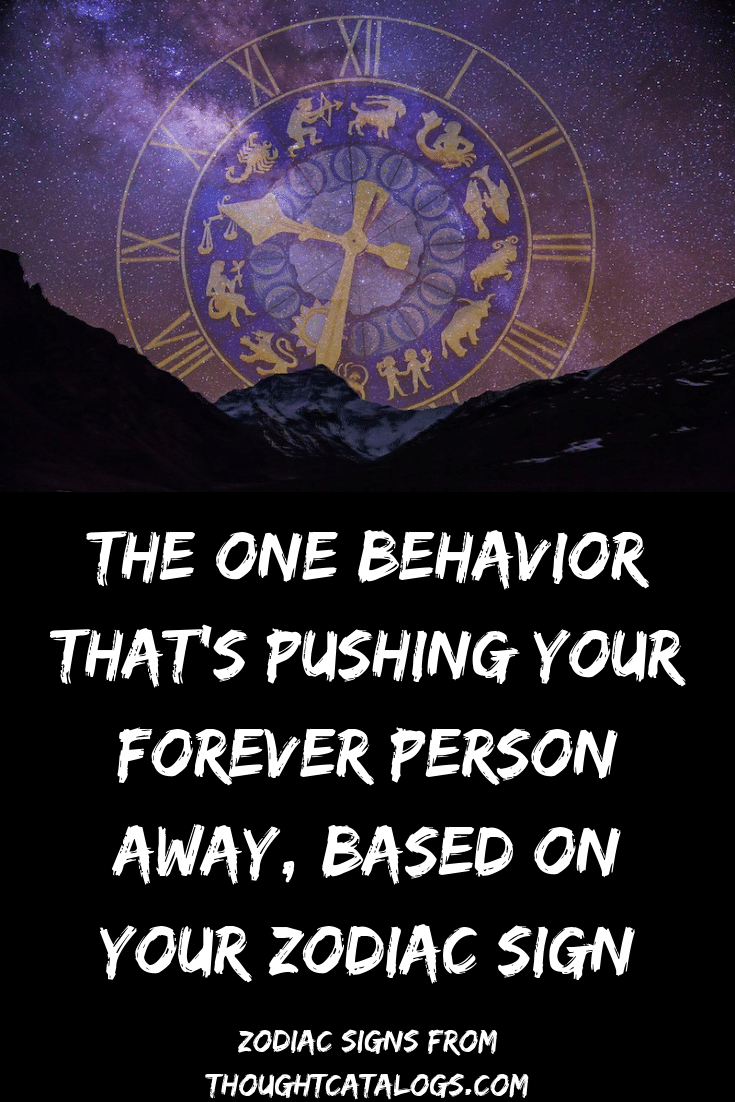 This Is What Your Biggest Nightmare Says About You, Based On Your Zodiac Sign