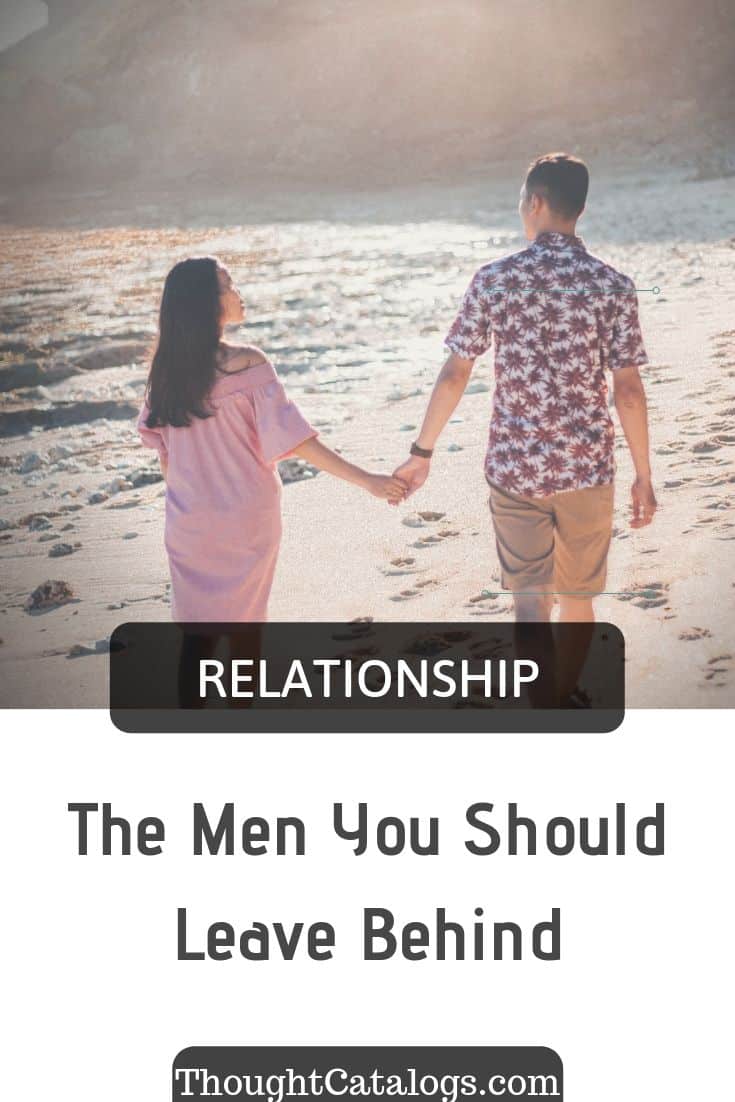 Leave behind men who act like boys. Men who say they’ll call you, but they end up stalling you and stringing you along because they wait for days so as not to seem desperate.  Well those kind of men you don’t need. You need and want a guy who wouldn’t want to wait to call you back, a man who doesn’t want to waste time he could spend with you.

Leave behind men who don’t text you back and keep you on ice. Men who think they are better than you and expect you to chase them. You won’t chase anyone; they will chase you.

Leave behind men who keep you as their backup plan. Men who have multiple options and play you for a fool by avoiding defining your relationship, so they can leave with no strings attached any moment they want.

Leave behind men who are not honest with you. Cheaters, liars and manipulators have no place in your life. You’re done with those d-bags and poor excuses of men.

Leave behind men who don’t have the courage to love. Men who are too scared to get hurt. You’re taking chances because you know if you don’t, it’s true you’ll never get hurt, but you’ll never find love either. You don’t need a man you’ll have to beg to show affection.

Leave behind men who worry what others are going to say. These outside opinions influence their choices and decisions. You need a man who will trust you and be there for you—even if you want to do something crazy that other disapproves of.

Leave behind men who try to change you. Men who are not satisfied with you as you are don’t even have to come near you. You are who you are, and if they don’t like it, they can move on. You sure as hell won’t stay long enough to give them a chance to try to change you.

Leave behind men who flirt for fun. Either he is serious about you or he is not. There is no ‘in-between’.

Leave behind men who have a hard time being faithful. They say they love you and that you are the only person for them, but they don’t define the relationship because they don’t want to commit, and yet they treat you like their girlfriend.

Leave behind men who don’t appreciate your attention. They just assume that you are going to be there for them any minute of any day. They know that everytime they call you, you’ll come running to them.

Leave behind men who play with your heart. Men who send you mixed messages. You’re not a toy to be played with. Either he loves you or he does not.

Leave behind men who walk first into a room. Men who are selfish, only look at themselves first and leave you to come in second. You want the man who falls in love with you to treat you the way you deserve, and you are not a ‘come in second’ type of girl.

Leave behind men who don’t take you by the hand when you’re out.

Leave behind men who party all night. Usually their parties end up in him drunk calling you in the middle of the night, inviting you for a quickie. This leaves you in an unwanted position in a relationship. You don’t want to be a side chick; you want something more.

Leave behind men who don’t open up to you. Men who refuse to talk about their emotions; men who pretend they don’t have a vulnerable side, like nothing could ever get to them. They’re fake. No one can be that detached from their emotions. It’s either that or they lack empathy which means they are psychopaths.

Leave behind men who pretend to be men, but are actually boys.

To The Girl Who Stole My Man: I Can’t Thank You Enough

A Leo Absolutely Loves Being Around People. This Makes Them The Happiest. They Also Really Enjoy Watching Their Favorite Shows With Someone They Love.

This Is How You Know It’s Time To Move On, Based On Your Zodiac

Even If He Leaves – You’re The One Who Wins

Only Your Soulmate Won’t Be Afraid Of These 7 Things About...