Most women don’t look at love as something fleeting in their lives. They fight long and hard to keep the love alive and make things work. But it’s not all up to them. Love without reciprocity and without nurture is bound to fade away.

They rarely fall out of love suddenly. For most women, that’s a gradual process they are usually unaware of. It sneaks up on them bit by bit once they’ve exhausted every atom of their strength in someone who doesn’t see them for who they really are.

When I look at my past relationships, almost none of them ended because of one big reason. There were millions of tiny ones that accumulated over time and killed all the love that was there. As I researched the matter thoroughly, I realized that a lot of women share my opinion. And while there are many reasons why women fall out of love, here are the most common ones:

Tears are powerful. They really have that cleansing effect on your eyes and they help you remove those rose-colored glasses most of us have on when we fall in love. Constant disrespect, lack of attention, mistreatment and even abuse are tolerated for the sake of love. But once a woman realizes that she cried through the better part of her relationship and that she can’t put up with all the bad things any longer, she is gone and she is not coming back.

The quickest way to lose a woman is by lying and cheating. If a man is capable of that early on in a relationship, imagine what he is going to be like later on. If we know anything about love, we know that its foundations are based on trust. And if those foundations are shaken, they are almost impossible to fix.

3. Tired of being at the bottom of their priority list

This is what most women forgive easily and repeatedly until they just can’t anymore. They keep on thinking ‘So what if he canceled our plans last minute, so what if he doesn’t text the entire day, so what if we see each other only once in a blue moon, so what if I can’t remember when the last time was he told me something nice or made me feel important’. There’s so many more what ifs, so many times they look past something and they forgive in spite of all the hurt. One day they can’t forgive anymore because none of the excuses matter and all of their efforts have been in vain once a man gambles away their love.

4. The chemistry is non-existent

It’s normal when the honeymoon phase is over that the spark is not as strong as it used to be but you should still feel some connection toward your partner. A lot of women fall out of love because their boyfriend is now just their roommate. He becomes someone they live with but nothing more. They can’t help but feel like they are settling for life without love. Chemistry, as well as love, can vanish without mutual efforts.

Love can’t be forced out of women by jealousy. If your partner can’t stand to be more than a few seconds without you, if he checks up on you every minute of every day and he can’t stand other men being around you (or God forbid if you have some male friends, he would totally freak out) then that can be very exhausting. Not to mention that relationships with overly jealous people are extremely unhealthy. No matter how much love and understanding a woman has for a man, with time he will suffocate all of it with his jealousy.

6. Worn out from constant fights

When two people are mismatched they will fight about everything. Most women are keen to try and work things out, finding some common ground and making compromises. But if her partner doesn’t share the same opinion, if he is more interested in making a good argument about whether he will win or lose an argument, he will lose his woman’s love in the process.

This is one of the most common deal-breakers for women. They give all they have and all they are in a relationship but their efforts are left unseen. They are taken for granted and underappreciated. They lack support, affection, attention and true love from their partner. When everything in a relationship is one-sided, who could blame a woman for falling out of love? 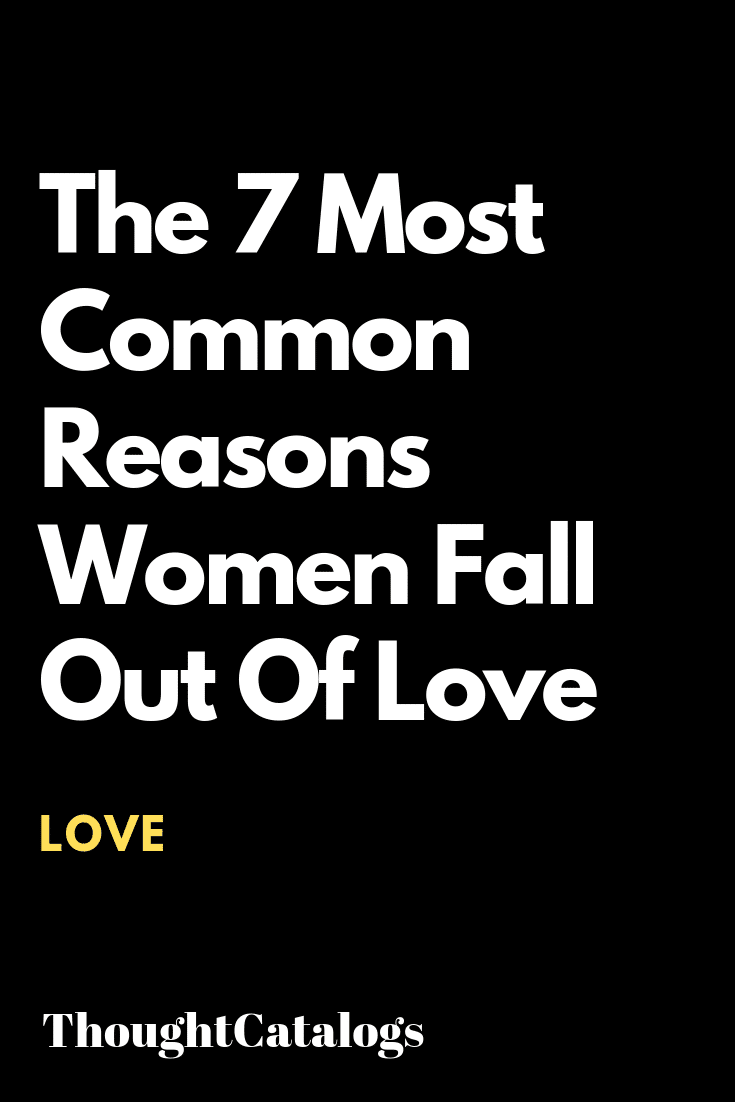 The Top 135 Heart-melting Affection Quotes For Him