The 6 Zodiac Signs Who Love Their Pets More Than People

These zodiac signs consider their furry friends to be furry family.

Some people feel safer with their pet than they do around other human beings. Do you have a furry (or scaly) companion in your life? Does that companionship surpass that of even your closest friend or romantic partner?

Many people tend to feel closer to their animals than their own family members and treat them as they would their own children. I personally don’t like the term “fur babies,” but there’s a reason why so many devoted pet moms and dads use it endearingly.

In many cases, animals just seem to understand emotions better than humans do. In fact, dogs in particular understand human speech a lot more than anyone thought!

There’s a reason that about 68 percent of American households include at least one pet, and it has a lot to do with the unwavering and intense yet non-verbal friendship that animals provide to even the most reclusive of humans.

Some zodiac signs are distinctively more apt to be in touch with animals. In astrology, While people of all horoscope signs  love their pets (how could you not?), a select few go above and beyond, loving their pets more than most of the people in their lives.

Everyone knows that dogs are man’s best friend, but for these zodiac signs, dogs (and cats, birds, iguanas, etc.) are considered family.

Tauruses are extremely protective, and pets are the perfect outlet for their strong sense of responsibility. They are patient and devoted pet parents, and they live for soft cuddles and puppy kisses. They aren’t anti-social with other humans, but the security of a pet relationship really entices them.

Geminis are notoriously social – with and without other people. That need for socializing translates into having a strong love of pets. When other people aren’t around, Geminis turn to their pets. They hate being alone, so having a permanent furry friend is almost essential to their happiness.

Having a pet allows them to express affection even when other people are unavailable.

Of the zodiac signs, cancers are some of the most intuitive and in touch with their emotions. While their connections to others are highly valuable to them, they also connect with animals shockingly well. Sometimes they feel as though other people don’t understand their emotions or that they are completely alone in their minds.

Having a pet allows cancers to create a deep connection without words. They appreciate the perceived understanding that their pets provide, communicating with only emotions.

Of all the zodiac signs that made this list, Virgos are the greatest animal-lovers. They feel a particularly deep connection with nature, often neglecting their relationships with people in favor of spending time taking care of their pets (and they typically have more than one).

Don’t take it personally if your Virgo friend can’t make much time for you; they just have a strong need to be in nature and taking care of their pets! If you really want to seek a deeper connection with them, become buds with their dog (the way to a Virgo’s heart is through their pet).

Libras are extremely caring and love the feeling of providing for others – especially pets. Pets allow Libras to maximize the use of their sharing spirit and help them to avoid loneliness (which really hurts them). Libras are also notoriously gentle and patient, traits that are essential for any pet parent.

As much as Libras enjoy the company of their friends and family, sometimes the love of a pet is the most important thing to them.

Like Libras, Pisces are extremely caring and compassionate. They love helping others and often devote their time to charitable acts. Their best friends, however, are the animals in their lives. To a Pisces, there is no better feeling than rescuing an animal and giving a home to a pup or cat in need.

Animals flourish in the company of Pisces owners because the endless love that they give is readily returned to them (and since Pisces are extremely social, they have plenty of friends to dote over their pets, too!). 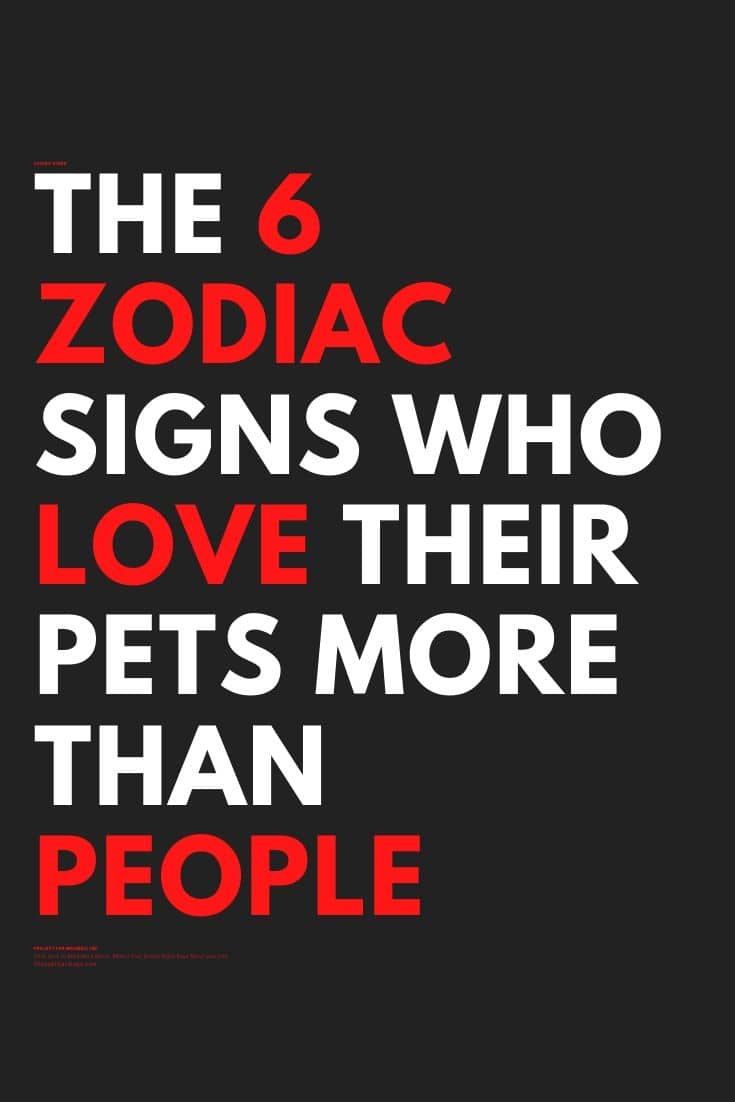 To the person who saved me from the dark: thank you. Before I met you, I was messed up, depressed with nothing left to live for....

The One Word That Describes December 2021, According To Your Zodiac Sign

When someone leaves you, the mere act of going through a devastating breakup is usually the biggest pain about it all. Your heart is crushed and all...

How to finally make the good meet ups with a woman

Whether you are an expert in “cruising” or not In a “hyper-connected” society, how often do people you meet greet or address you with a...

Alright, so I don't normally get all gushy about celebrity couples, but there's something about Kristen Bell and Dax Shepard that always reinstates my...

How To Improve Your Flirting Style, According to your Zodiac Sign

23 Signs To Tell If A Shy Guy Likes You

Engagement Ring She ACTUALLY Wants, Based On Her Sign

What If I Never Love Anyone Else The Way I Loved You?

What Your Sleeping Style Says About Your Relationship

Taurus isn’t always serious, they have a goofy side that loves to laugh.

A Libra Is Skilled Enough To Be One Step Ahead, But Make You Believe They Are One Step Behind.