Ways By Which Each Zodiac Sign Tries To Manipulate You

“I’ve been doing this a long time- manipulating people to get my way. That’s why you think you love me. Because I’ve broken you down and built you back up to believe it. It wasn’t an accident. Once you leave this behind….. you’ll see that. -Caleb” ― C.J. Roberts, Seduced in the Dark.

Peer pressures everyone with confidence

The upfront Aries wouldn’t even hide their attempt to manipulate you. They have tasted success so much that when they peer pressure everyone and manipulate them, it becomes difficult to question them.

When dealing with a manipulative Taurus, one has to remain logical. The Taurus is clever enough to act like the victim and manipulate the situation in such a way that you will feel you are the one who is at fault and give in to their demands.

Convinces others with their half-truths

The twins with dual personalities can be loyal friends and liars beneath their skin. They can manipulate you in such a way that you will believe their half-truths and act in the way they want you.

We all know Cancer is the sensitive one. So people usually avoid giving negative vibes to them. However, Cancer uses this to their advantage. If someone denies their wish, they would emotionally manipulate them so that the other person feels guilty of rejecting them and gives in to their demands.

Mocks others to make them inferior

The proud Leo can’t even think that people will do anything against their wishes. If anyone dares to act otherwise, they will judge them outwardly, mock them to make them feel inferior and eventually they will submit to their demands.

The Virgo wouldn’t tell directly what they want. Instead, they will work their way through other’s minds, slowly planting their ideas. When the victim executes them, they wouldn’t doubt that they were manipulated to do so.

The Libra uses their caring nature to feign helplessness when they feel things aren’t going in their way. Their peers will immediately jump into helping them while they sit back and enjoy the show.

One of the most intense signs of the zodiac, the Scorpio is full of drama. If they don’t get things they want, they will just give you 2 options: either you do it or they leave.

Some fall in this trap and accede to their demands while very few are strong enough to test whether they will actually leave or not.

Blackmails others with their past misdeeds

When the Sagittarius realizes they are in a soup, they will bring up your past wrongs to make you feel guilty. They will manipulate you into thinking that you’re the one who made more mistakes which are worse than theirs and that’s how they get away with their own misdeeds.

Being extremely practical, the Capricorn relies upon facts and statistics to manipulate others. They would give such information that the victim will feel they are the idiot and succumb to their demands.

The Capricorn wouldn’t even step back even if they have to make up these facts.

The clever Aquarius will apologize for increasing the intensity of their mistake. They will act as if they will never ever do it again.

The reality is, they are ‘Sorry and not-so-sorry’. Once they have convinced you they can be trusted, they will go back to their old self the very next day.

The Pisces follows the motto “Silence is the best form of revenge” way too seriously. They wouldn’t go into heated debates and rather use a passive form of aggression: silence. They will ignore you so much that you will feel you are a complete stranger to them.

The only way to get them to start communicating with you is by giving in to their demands. 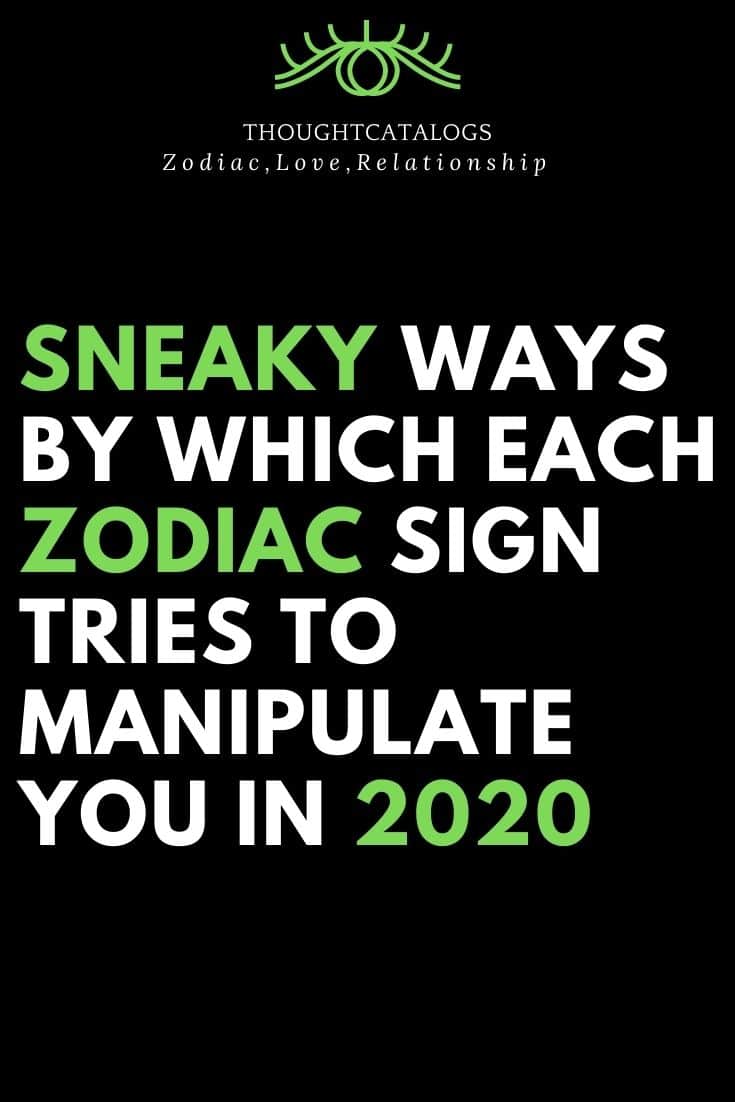 Cheating On Phone: 8 Digital Signs Of Your Partner’s Infidelity

The ultimate list of cheating on phone clues that will help you identify a digital cheater (or get rid of the doubt)! “Ask you once,...

Every woman wants a strong and mature man beside her but rare are the ones who actually find guys like that. Most women that I know...

She didn’t fall for you just because. She didn’t see you and let her heart flood with love. She guarded herself but you were...

On Saturday, your emotion and also sensitivity will certainly be strongly shared in your activities or decision. The wonderful powers you put into them...

This is a message for all narcissistic men, sociopaths, selfish, feelingless ‘human beings’ who only enter into a relationship to amuse themselves. To all men who make...
𝐓𝐡𝐞 𝐭𝐡𝐨𝐮𝐠𝐡𝐭 𝐜𝐚𝐭𝐚𝐥𝐨𝐠𝐬 is an Educational & Entertainment Platform theme. Our Team Publishes 100+ Content On Weekend/Monthly. We will motivate the needs of any person & make them inspire instantly You, Will, admit Once You Begin Your Journey With Us. The Thought Catalogs platform is a perfect choice.
© Copyright © 2022 - All Rights Reserved | TheThoughtCatalogs.