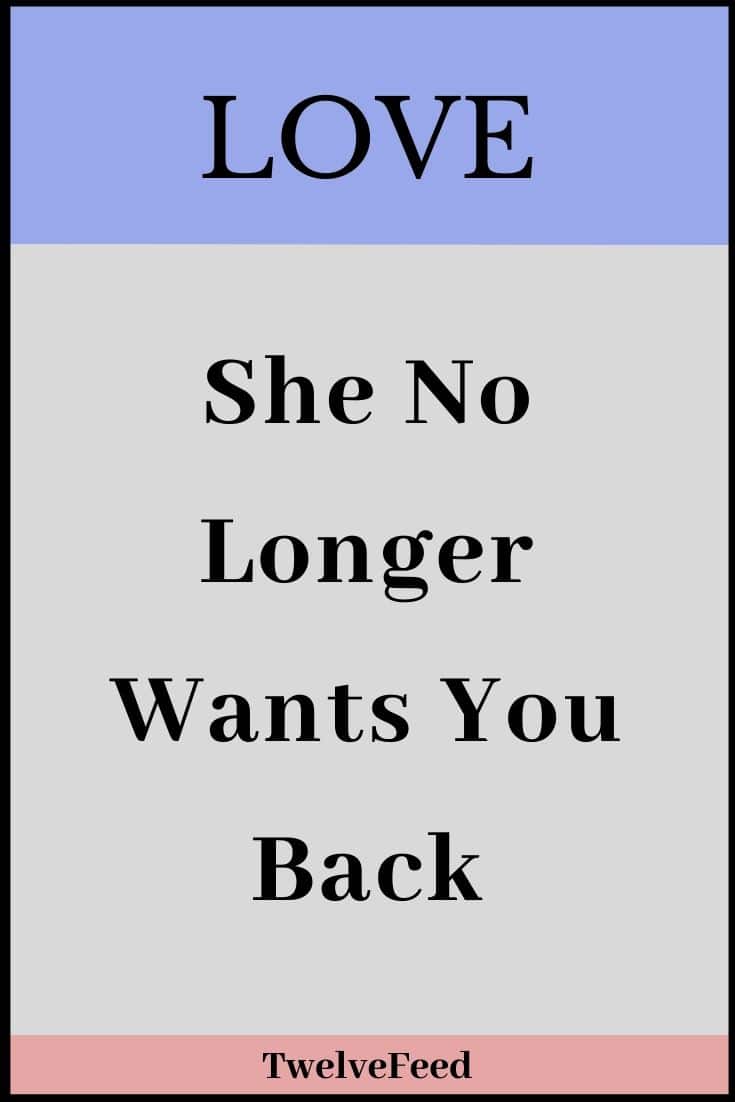 Finally, she no longer wants you back.

She missed you so much. She missed it as if what you had wasn’t painful.

It’s funny how a heart can be deceiving. It just reminds us of the pretty memories as if it was trying to convince us that the bad days never existed. But she knows they did. The cracks on her mind, soul, and heart remind her of that constantly.

But she’s learned to live with it by now.

She’s managed to break free from the chains of your love, that toxic love you gave.

You deserve applause for the play you pulled off so well. Not for a second did she doubt your feelings. Not for a second was she able to forsee the heartbreak ahead of her. You got her hooked so well that she turned out to be just a mere puppet in your hands.

But there is an end to everything and so the end to your manipulating games has arrived.

She’s finally freeing herself from this idea that you’re the one for her. You’re not.

She’s letting life carry her to a new place. She believes from this point on, things are going to be better because sh’s already been through the worst.

Holding on means trying to push life where she wants it to be, thinking she can change the circumstances when in fact, she’s unable to change anything. Your story is what it is. And it’s never gonna be more than that no matter what she does.

She’s ready to accept you as you are.

A tormentor and a victim.

You – an immature man who wanted to be put on a pedestal and worshipped and her- a girl who needed so much to love and who wanted to be loved so badly that she got blinded by the smallest affection. Lethal combination, don’t you think?

But as I said before, there is an end to everything and I really meant it.

When you walked away, that’s not when you two ended. Because she couldn’t let it go. She wanted you back so badly. She knew it was unhealthy and she knew you made her feel miserable more than you made her feel happy and yet, she missed your presence. She wanted you just to be near her no matter how much it hurt. But she outgrew her emotions and she stopped being toxic for herself.

She’s replaced all the venom you imprinted on her with pure fresh blood and this new version of her doesn’t want to have anything with you anymore.

Now she sees clearly that although she thought you brought her a lot of love, all those happy moments were replaced by the pain you’ve put her through. She had to pay for them somehow, someway. For a moment of happiness, she needed to live days of misery. And this isn’t something she’d wish even for her worst enemy.

Even though she thought this day won’t ever come… it did. She doesn’t want you back. She’s ready to leave you in the past and never look back. Because that’s where you belong.

The One Thing You Need to Do This Summer, Based on Your Zodiac Sign

LEARNING TO LOVE AGAIN: 12 PROVEN WAYS TO REOPEN YOUR HEART

He Truly Wants To Make You His First & Last One

How To Be Mature: 18 Tips To Help You Boost Your Maturity Levels

How A Man Shows He’s In Love, According to His Zodiac Sign

The Truth Is, You Will Never Be The Man I Want...