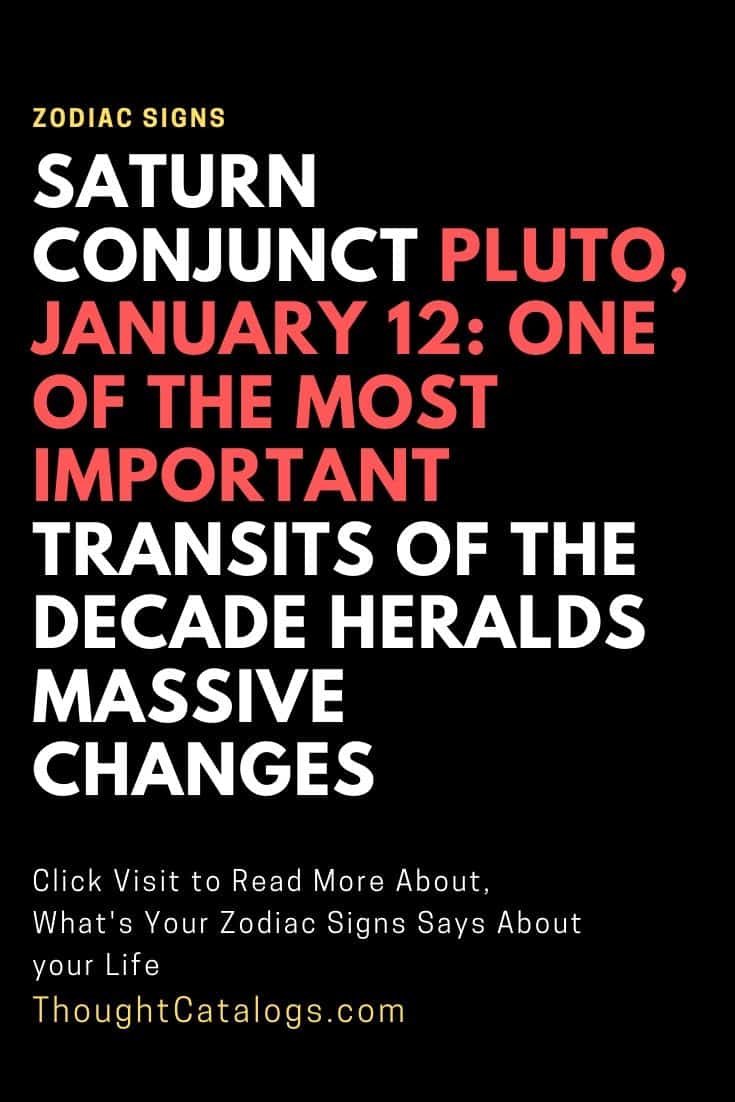 Sometimes the Universe brings out alignments that are so unique that it makes us stop and stare. Such an alignment is in store for us as Saturn conjuncts with Pluto on January 12, 2020.

To put it simply, this conjunction is the planetary alignment between two planets that are placed at a degree that is similar to each other. The degree itself resides in the zodiac. And while such alignments aren’t that infrequent, the Saturn-Pluto alignment is considerably rare.

It will be in Capricorn that Pluto and Saturn would align on the 12th of January. At exactly 22 degrees, the two planets would meet and while this would be the only time of the year when these planets align- it would cause a massive rippling effect that would last throughout the year.

It was in 1982 when these planets last aligned, in Libra. But this is the only time when everyone living would be able to see the two planets in alignment in Capricorn. We might never see it again- making this event even more priceless.

Needless to say, this is a special event that deserves a lot of attention from the astrological community throughout the world, and so it will.

What Should We Expect

Since we have always been connected to the higher realms of the Universe, it goes without saying that we would be able to understand the happenings around our own surroundings by checking up on the stars. So, the alignment of the earth and other planets would be a light for our own safety.

While Astrology does tell us how to face the vibrations and understand the alignments, how we actually experience it and go about it is completely our own jurisdiction. Every single human out there has had a different experience that can never be matched.

Putting that in this situation, the conjunction between the two planets would provide us with unique experiences, but there are still several aspects to it which we should gaze about. The energy that will be projected from this conjunction would have massive impacts on things throughout the world.

We could take recourse to history in determining where we stood the last time Saturn met with Pluto in conjunction and we had wars, economic crises, authoritarian governments, and the like. And that isn’t exactly very surprising.

Saturn has always had a reputation of being very cold and unforgiving. On the other hand, Pluto is all about rebirth. So, it wants to break down every existing structure to rebuild something from scratch. But while their intentions might be good, their results could be power-hungry and domineering.

It must be noticed that both the planets present a façade of darkness. If one were to look deeply, one would notice that this darkness hides positive energy that is bigger and more powerful than ever before.

For, on a higher realm, Saturn is all about working for the bread. Saturn sets healthy goals, and will never give up on their ideals. It reminds us of the challenges that we still need to face while giving us the ability to face those challenges.

In comparison, Pluto is all about transforming us into higher beings. It wants us to come to our fullest potential, for which it gets ready to provide us with full support. Pluto heralds the highest transformation of all- one that would enable us to return back to the love we came from.

Although it is unclear as to exactly what Pluto and Saturn might concoct the upcoming year, it goes without saying that whatever they do- it is going to herald massive changes for the world beyond.

HOW LONG DOES IT TAKE TO FALL IN LOVE? 7 FACTORS WHICH MAKE A DIFFERENCE

Your Most Beautiful Body Part Based On Your Zodiac Sign

7 POSITIVE SIGNS HE IS MADLY IN LOVE WITH YOU

Horoscope 12/2019: What Is December Bringing For Each Zodiac Sign

ThoughtCatalogs - March 24, 2020 0
With the beginning of 2020, the air is filling with a scattering of pixie dust, as well as with magical beliefs in the possibilities...