Ah, here we are, in the midst of Libra season, about to kick off Scorpio season, and the vibes aren’t necessarily flowing as they normally would. Can you feel that? Granted, these three zodiac signs will have the worst Scorpio season, but it’s not the end of the world, I promise you: Aries, Leo, and Sagittarius.

The truth is, we are all on a spiritual journey, except we’re also living a human experience, and that in itself can feel a bit heavy at times. I mean, I know I’m not alone here when I say, 2018 has been a year of intense growth, both personally and collectively speaking.

For instance, last year on Oct. 10, Jupiter, planet of luck, expansion, and cosmic abundance took a deep dive into the depths of Scorpio, shedding its light on all that was kept hidden beneath the surface. Issues related to sexual harassment, and abuse of power were revealed, and we, the collective, experienced this as a whole, as well as in our personal lives.

Imagine, this is Jupiter’s last hoorah in the underworld for the next 12 to 13 years, so you best believe this planet has more up its sleeve. Are you ready for a liberating Scorpio season?

WITH THAT BEING SAID, HERE’S WHAT’S IN STORE THIS SEASON FOR THESE THREE SIGNS:

ARIES: YOU’RE READY FOR A CHANGE

Not excited for Scorpio season? Well, did you know that you and Scorpio are sort of like cousins? Mars is your planetary ruler, but it’s also Scorpio’s traditional ruler, so you two have more in common than you think.

However, with the sun traveling through your eighth house of sex and transformation, you might not be in the mood for much this season, Aries. By all means, don’t overthink this, or put pressure on yourself. All is cyclical, and this is your time to kick back and regenerate before you move on and take that leap of faith.

Although, I do see an adventure in your near future. That’s right, I said it. There are adventures in the horizon for you, and that’s because Jupiter is about to enter Sagittarius and your ninth house of travel. It’s OK to lay low this season, especially since you’ll be off on a journey somewhere sooner than later. how to love an Aries and Secrets Things You Need To Know About An Aries

LEO: HOME IS WHERE THE HEART IS

Hi, Leo. Don’t worry; you’re the life of the party this season, and every season. However, with the sun traveling through your domestic fourth house of home, family, and soul foundation, you won’t really be in the mood to party at all, and that’s OK.

This is a time for you to nest, and find comfort in the pleasure of your own home, surrounded by loved ones. It’s not that this season is going to suck per se. Although Scorpio does, in fact, square your sign, which sort of brings a little tension to the surface, but not to worry, you’re surrounded by the people you love, and that’s all that matters.

Trust me, we all have our very own cosmic weather channel, and well it’s your turn to be selfish, and nurture yourself. Leo Man easy to get, but easy to Lose. “HOLD TIGHT” Know the SECRETS

SAGITTARIUS: YOU NEED A BREAK

Listen, there’s no reason to freak out, especially since your ruling planet Jupiter is about to make its big debut in your sign. Do you know what this means?! This is major, not to mention lucky as hell!

However, for now, and by that I mean, Scorpio season, it’s time for you to kick back and recharge your batteries. Let’s face it, you’re about to conclude yet another blessed trip around the sun, and you’ll need as much rest as you can get. I know you have permanent FOMO, but sometimes your soul needs a retreat.

In fact, if you aren’t a fan of spending time on your own, perhaps this season you’ll get a glimpse of what it’s like to embrace your solitude. No need to be afraid, Sagittarius. Everyone deserves some rest. You can also read our another Secrets things that make Sagittarius the most romantic partner ever 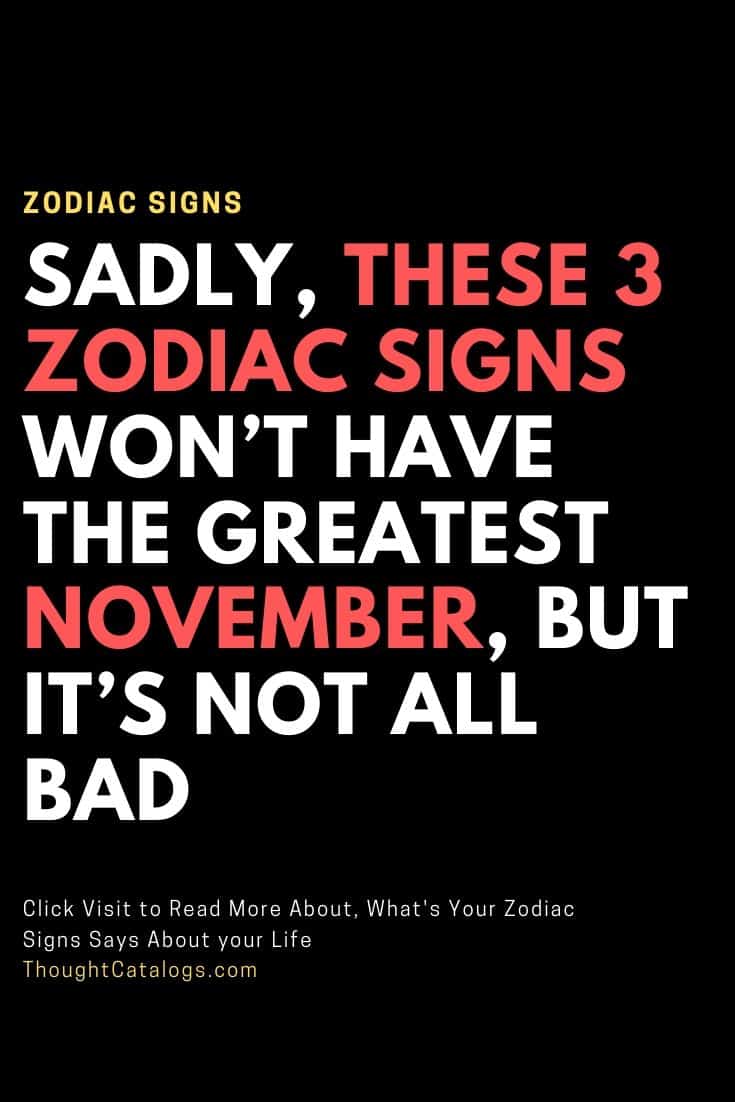