When I was little, whenever anyone asked what I was afraid of, I would always declare “Nothing!” proudly, thinking that was the epitome of cool and daring. Later on, I admitted I was actually afraid of quite a few things. I was afraid of heights, small spaces, spiders, the dark, being alone, and failure (among other things).

In high school, college, and beyond, I often found myself associating with people who seemed to embody fearlessness. We would pull pranks on each other, dare ourselves to achieve ridiculous feats, and sometimes even break the law. Once we stole the sign off the top of a Domino’s delivery car just for fun. But soon, I realized, once the adrenaline faded, these petty mischiefs didn’t make me feel any braver. I still slept with the lights on. I would still crumple, sobbing, in the shower after receiving a bad grade. And I was still terrified that I would never be good enough.

When I met Will, at first he seemed like many of my other friends. Always laughing and suggesting some new adventure, he fit into my life seamlessly. When I graduated from college early and moved to New York City, he visited me and we became even closer over lots of sushi, beer, and karaoke. When I moved to California, he wrote to me. And when I came back to the East Coast, it felt like nothing had changed. We were best friends.

After more than two years of being friends, Will and I slowly began realizing it was becoming something more. I was terrified. I had been in a few relationships before and felt myself shatter a little bit each time one of them failed. I told him I wasn’t ready for a commitment and he said he would wait. And he did. At first, dating him was scary because of how much he already knew about me. He had seen me go through multiple relationships and knew all of my flaws. I couldn’t tell if I should be grateful or horrified that he still wanted to be with me, even after seeing how imperfect I was. But he did.

Because of my uncertainties, we broke up a couple times, as I kept second-guessing myself. Were we good together? What did other people think, since I dated one of his friends? What if I was bringing him down? In my efforts to match his extroverted, adventurous spirit, I planned all kinds of activities for us. Now, looking back, I think I was afraid he’d find the “real me” to be boring. So we went skydiving and white water rafting and hiked 5,000 foot mountains. And it started to awaken something within me. Adventure and travel had always been passions of mine, but I started to understand that these experiences weren’t about conquering fears (after all, being afraid to jump out of a plane is a legitimate fear!), but rather occasions to make memories.

We went to Spain together. Despite my minor in Spanish, I was anxious about actually speaking it, picturing our waiter or Uber driver laughing hysterically at my horrendous accent. But he gently pushed me to try anyways. One of my favorite memories is when a man came up to our table at a restaurant, selling roses. No one else was buying any. But Will reached out to him, and using a combination of English and broken Spanish (he took German in college), he bought 3 roses and handed them to me, smiling. To him, it was a simple, spontaneous action. But to me, it was so much more. That was when I fell in love with his generosity and bravery, though he probably didn’t see his use of substandard Spanish to be anything special. But to me, it showed that it was okay to be imperfect. It was okay to fail, and to laugh at yourself while doing so, even in front of someone you love.

After five years at a job that made me miserable, Will and I both decided to quit our jobs. He moved to Alta, Utah to live on top of a mountain. A few months later, I was offered a temporary position in Jerusalem, Israel. When they told me I had gotten the job, I burst into tears. I was scared. I knew no one in Israel. I didn’t know any of the language, and I knew I would miss my family. But Will told me something that would stick with me for a long time: “Long distance is hard, and making new friends is hard, and being in a new place is hard. But being true to yourself should never be hard—it should be natural.” And then he added, “I trust you, and I know that at the end of the day, you’ll make the right decisions.” And he was right, it was really, really hard. Keeping a relationship healthy while more than 7,000 miles apart, with a 9 hour time difference and practically nonexistent cell service, was a challenge that I would not like to repeat. But it brought us closer as it tore away our daily communications and any physical touch and forced us to trust each other.

When Will came to visit me in Israel, it was one of the most joyful experiences I have ever had. We sailed in the Sea of Galilee, floated on the Dead Sea, and saw Petra for the first time. It was incredibly beautiful. And also incredibly real and imperfect, as both of us were hit with food poisoning and incapacitated for some of the trip. But that is now part of our story. Before, I would have been completely horrified at the thought of my boyfriend witnessing such a situation. But he only laughed and assured me that I was still attractive, despite any smells to the contrary.

Once I came back home, I saw that some of my experiences in Israel had helped me to be more open and honest with my own fears. When Will asked if he could teach me how to ski, I didn’t immediately laugh it off, as I would have previously. We went to Attitash, and on the drive up, I sat in the passenger seat picking at my fingernails, something that I do when I get nervous. Will noticed and quietly reached over to hold my hand. “I know you’re nervous,” he said. “It’s going to be okay.” I nodded and coughed out a nervous laugh, not quite believing him. But once we got off the chairlift, he patiently encouraged me, showing me how to follow him and praising me excitedly when I did the smallest thing correctly. When I had a mental block and couldn’t go any farther, he held my hand again and helped me glide all the way down.

Since then, I haven’t become fearless, as I once claimed. But I’ve realized that I don’t have to be held back by my fears. Now, with Will’s help, I can see that even though heights still bother me, I don’t have to stay on the ground. Even though small spaces make me feel anxious, I can simply close my eyes and breathe. In the dark and alone, I can imagine the stars where we stayed in the desert of Wadi Rum. When I am worried that I will fail, he is there to remind me I am still good enough. And whenever there is a spider in the bathroom, I can call my brave husband to come and remove it. 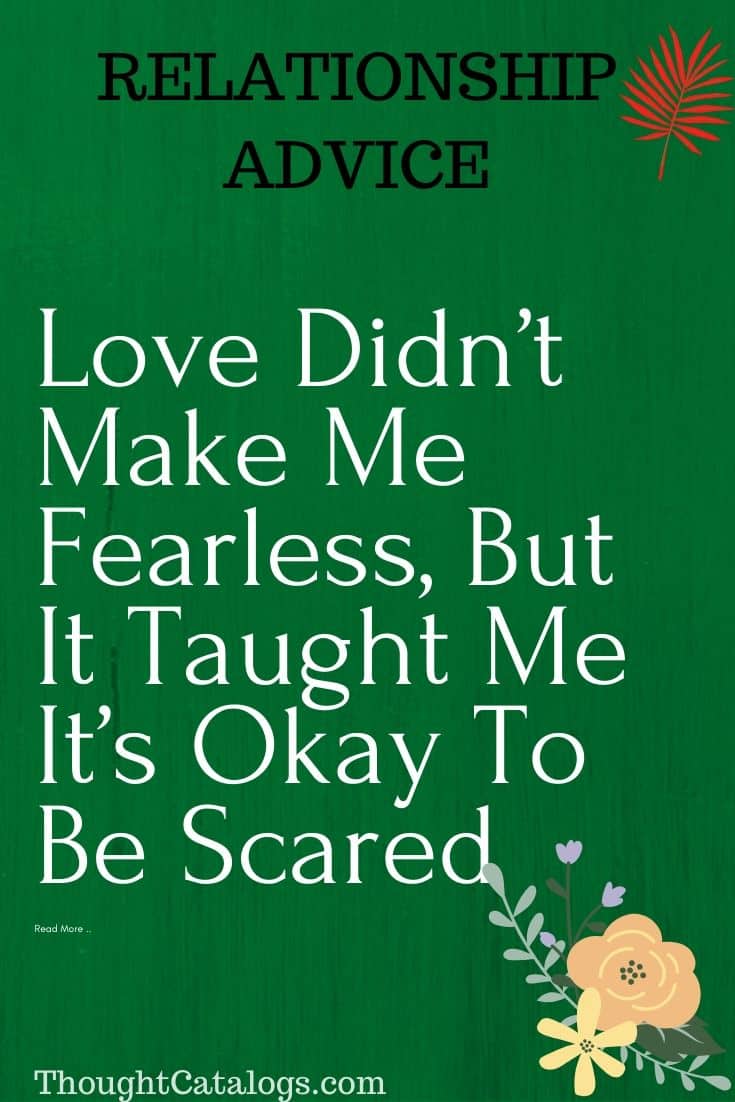 The Unedited Truth About Emotional Abuse