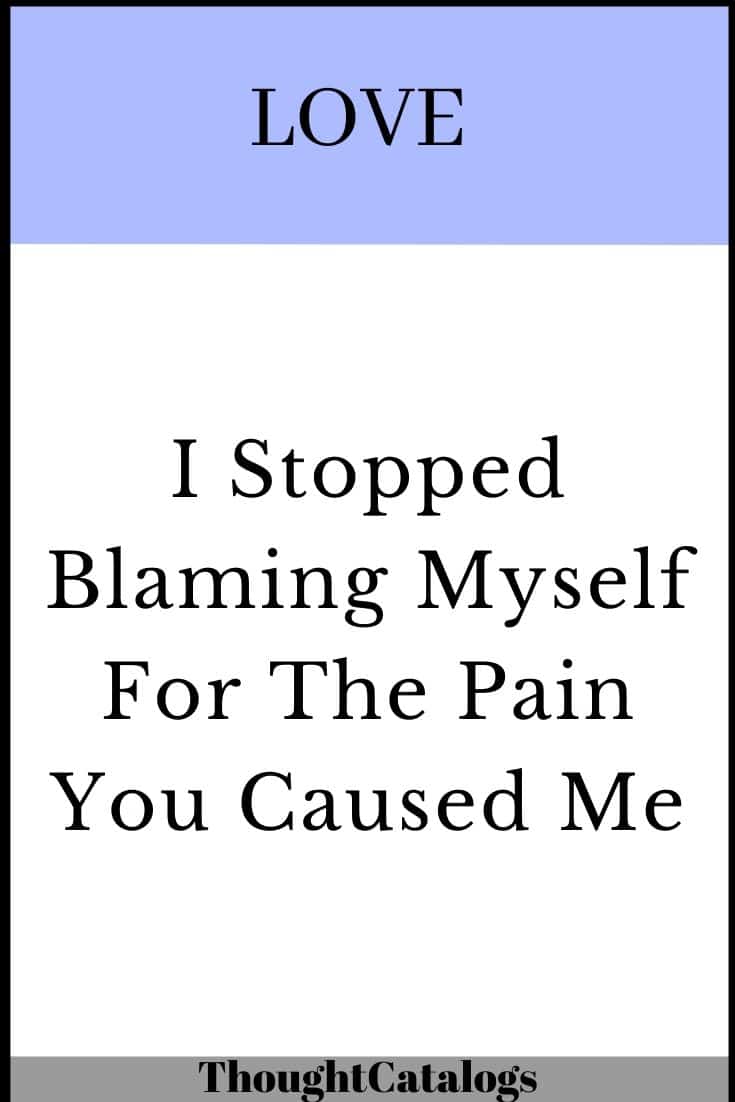 The ugly side of being human is that you’re the one in charge of deciding how much you’re worth. And I wasn’t ever ready to carry that much responsibility.

I blamed myself for everything. I willingly made myself a victim because I kept you on a pedestal. I kept thinking there is no way you could’ve done something wrong to me.

I decided I was the one unworthy of being loved and I was the one to decide that I am not worthy enough to be happy. But I was wrong. I was so wrong…

You were the one to make me question my self-worth. I kept asking myself if I was pretty enough or if I was behaving correctly. I kept being so hard on myself and I kept bringing myself down. Whenever you were unhappy about something, I always blamed it on myself. I thought it was always something that I did that made you feel like that.

No woman should ever be blamed for the actions of one man because no matter what happened, everybody should take his fair share of the blame. It took me awhile to get on board with what I knew a long time ago, but when I finally did, I realized I wasn’t guilty of all those things I put on my shoulders. I wasn’t the one that should be blamed for all the pain you caused me. So, I just stopped putting the blame on myself.

I stopped comparing myself to your other dolls. I know I could never be like them, but I also got that I shouldn’t. Because in my attempts to be them, I’d lost myself. And I might not be what you want me to be, but one day, I’ll be exactly what somebody else was searching for his whole life.

I stopped looking at you as if you were God’s ultimate creation. I stopped thinking you were perfect and I stopped putting you on a pedestal. I stopped being the one always bending the knee and I stopped accepting to be a victim for love.

I stopped mistaking what you gave me for love.

I stopped picturing our future together. I stopped believing you and me are ever going to be us. I stopped romanticising my suffering and I stopped trusting our timing. Because we were never going to happen for real. No matter how long I waited, no matter how I fooled myself into thinking that the future would bring brighter days for us, you were never truly on board with it. You gave up on me before we had even begun.

You caused me the first wound with your inability to love me, but I caused all the rest by believing things would change. You got it started, but I kept it going. And things kept getting worse and worse.

I decided to stop investing my love into something that isn’t going to work out and save myself while I still had the chance.

Years from now I won’t regret saving myself, but I sure as hell would regret having stayed with somebody who was unable to love.

10 Damn Good Reasons To Forgive Someone You Hate The Most

5 Zodiac Signs Who Will Experience Life Altering Changes This 2019

The December Solstice Is Bringing A Spiritual Shift, And This Is What It Means For Your Zodiac Sign

Why People (Wrongly) Assume You’re Lazy, Based On Your Zodiac Sign

YOU CAN’T SAVE SOMEONE BY LETTING THEM DESTROY YOU

ThoughtCatalogs - May 14, 2019 0
When you look like a wreck that’s been splashed to the shores of undeniable pain, you know that you have given yourself away too...