I never saw myself as an expert in love or someone who’s fit to give others advice when it comes to love, but thanks to the hell I’ve been through and the hell I’ve put myself through, I think I might be able to help someone by telling my story and actually help myself if I start listening to my mind as well from time to time instead of pursuing my heart.

I’ve made a few wrong turns in my life and I’ve loved a few wrong guys here and there as well. I don’t want to beat myself up because who hasn’t? I believe you’ve done the same as me, too. You’ve also fallen for someone head over heels just to see he isn’t good for you. And instead of stopping yourself, you ended up falling even harder because you just couldn’t make your heart listen.

I never consulted with my brain before I made a decision. I was always running after my heart. I guess that’s why I got my heart broken so many times. I kept convincing myself with each new story that things will be different, but the odds never ended up being in my favor and at the end of each ‘love’ story of mine, I ended up being the one that got her heart broken.

I bet you too went through the same hell as me. I’m even sure you’re the one that allowed herself to fall for someone—even though you knew he’s bad for you. You knew he’s bad, but you couldn’t stop yourself. You fell even harder than you normally would have and you ended up loving a guy who’s everything but good for you.

There is something wrong with us that makes us want even more those who’re toxic to us. It’s like there is this voice in our head telling us: “Fall for him, it’s going to be fun”. And as much adventurous as it gets to fall for the wrong guy, it always ends up with severe consequences.

“No pain, no gain” is a slogan used in gyms, not a slogan that will help you in love. Love isn’t supposed to hurt that much, you know.

It’ okay to fight for the love that makes sense, but if nothing about him makes sense, why would you give him the power to break you? Why would you go through all the pain in one relationship just to see something that was more than obvious in the beginning—it just wasn’t meant to work out.

I know you’ve convinced yourself that what the two of you have is love and it’s probably because you see it that way. I know you see only good in others and I know you probably won’t change. But I don’t think he feels as same as you do. I don’t think he’s in it for better or for worse.

I think he only loves the feeling of being loved. Your attention goes down well with him and he loves that ego boost he gets from you, but darling, that’s not love.

Trust me, I’ve been in your shoes, but you haven’t been in mine. I was also blindly in love and I did everything I could to make it work. But sometimes you miss those toxic signs in the beginning and even if you don’t, you find yourself falling for someone who’s never gonna fall for you as much. And when things come to an end, and they always do if love isn’t right, you end up being completely broken or destroyed.

I know you think you love him and that he loves you. But that isn’t true love. Because if it was, it would be tearing you down piece by piece. It wouldn’t leave you confused or wondering. You wouldn’t be trying to catch his attention or try too hard. And I know you have a hard time hearing this because you’re probably not ready to hear this yet and these words will come to your mind only when you’re ready to hear them. But I see it clearly, and I know how things are going to end up because I’ve been there.

You’re changing more and more each day. And as each day passes, you look less like you and more like he wants you to. And in a few days, weeks or months, you’ll look yourself in the mirror and you’ll see a stranger staring back at you. And I don’t want that to happen to you. So don’t let it. Don’t lose yourself for something that isn’t love.

Love is so much more than this and love isn’t supposed to destroy you. If you’re ready to give the best of you to love, make sure you’re giving it to the right guy. Only then will it be worthwhile. 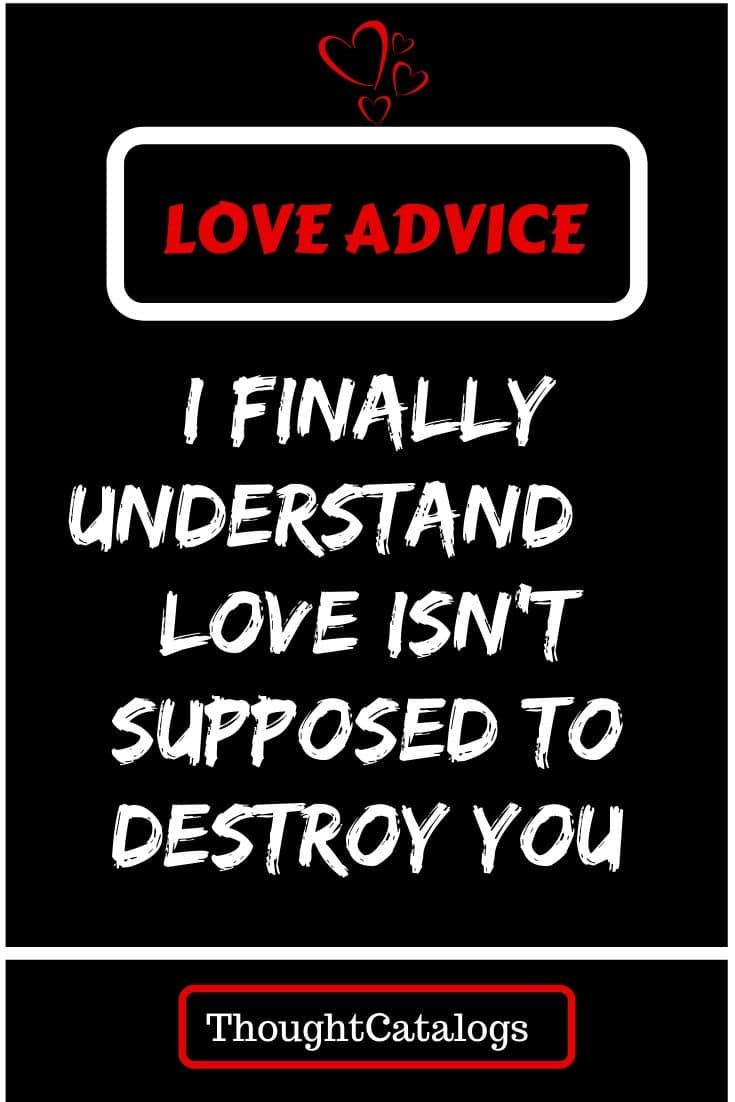