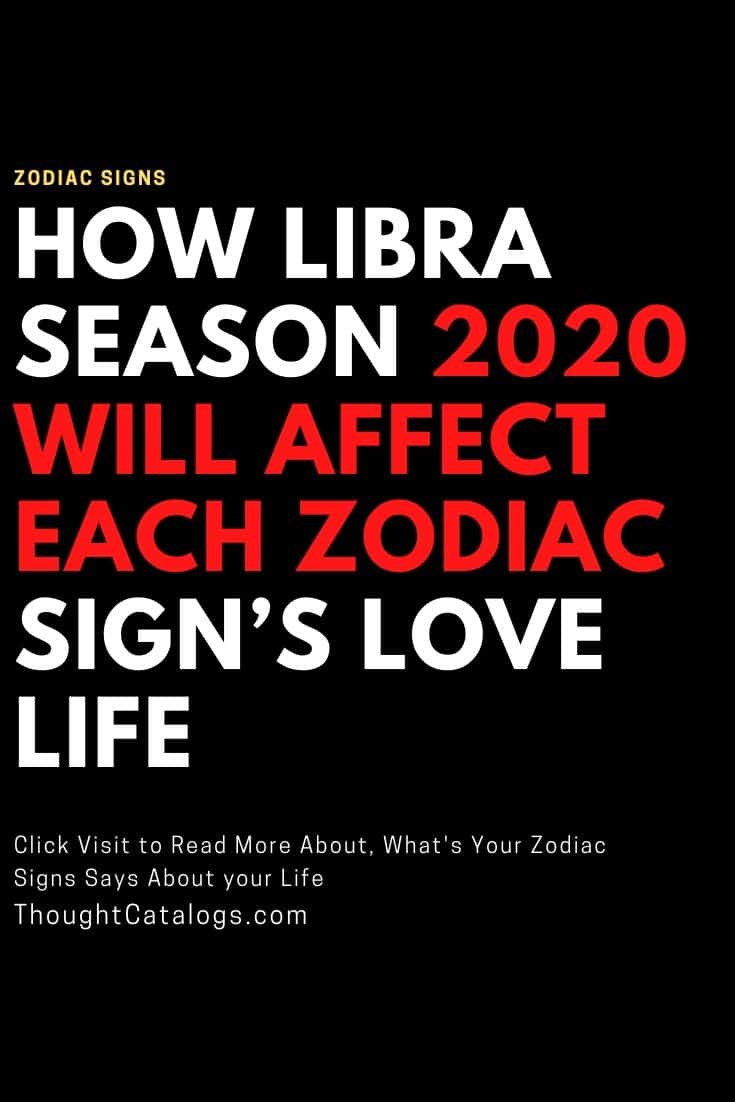 We are officially in Libra season. Starting September 22, the sun will be in Libra and will stay put until October 23. At that time, it will take its leave and move into Scorpio. It’s going to be, for lack of a better word, an interestingtime.

“Libra is cardinal energy, which initiates change,” astrologer and psychic, Cindy Mckean, tells Bustle. “Considering that we are at the start of a new season, autumn, it’s a time we start to notice changes all around us. The weather gets cooler, leaves on the trees change color and start to fall. There is a sense of wrapping up the harvest that the previous Virgo season worked hard to accomplish.”

Not only are there changes ahead for all the signs, but because Libra is ruled by Venus and Venus will be retrograde from October 5 to November 15, the harmony that Libra loves so much might not be as easy to find to this season.

“Libra is ruled by Venus, the planet of love and romance, among other things,” says Mckean. “Harmony is important to Libras and everyone during Libra season. As Libra is symbolized by the scales, balance is part of harmony. With the Venusian influence, our five senses will play a role in how we love during this time of year… the scales are sure to swing a lot more than they usually do.”

So, yes, no matter your sign, you’re going to feel a little something extra this Libra season. Here’s what you can expect on the love front.

“Being a sign on the opposite pole of the zodiac, you may feel a little out of your element this time of year while also feeling rejuvenated,” says Mckean. “Aries season heralds spring with new blossoms and fresh energy, while Libra heralds the ending of cycles. … this is a time for you to slow down and take stock of the people in your life.”

But if you’re looking for love, don’t worry! Your time will come later in the month, when you find some romantic connection through the relationships and friendships you already have in your life — think Pam and Jim from The Office.

“Be sure to surround yourself with like-minded people,” says Mckean. “You’ll catch more mates with honey than with vinegar.”

Like Libra, Taurus, you’re also ruled by Venus, meaning you’ll feel that cardinal energy too and it will give you the boost you need. Just be careful of how and where you use that boost.

“If you’re indulging in memories about past loves, don’t take it beyond that point,” says Mckean. “After Venus moves direct, you’ll feel like you’re ready to venture out and find romance.”

In other words, play it cool for now. You’ll know you’re ready when you feel that pull when Venus moves direct.

“Gemini tends to have fun during Libra season and it won’t be deterred by the upcoming Venus retrograde,” says Mckean. “You’ll enjoy catching up with past lovers and mend any misunderstandings that may have happened during the last Mercury retrograde. Go out and play, flirt, and enjoy yourself.”

However, Mckean warns that if you’re looking for long-lasting love, this season might not play in your favor in that regard, Gemini. It’s not until Sagittarius season rolls around that long-term will be a more viable situation.

“If you’re looking for short-term fun, this Libra season will be ideal for that! You’ll make a lot of friends this month,” says Mckean.

Although this Libra season is more favorable toward Cancers who are currently in relationships, that doesn’t mean that all the singles out there won’t get their piece of the pie too.

“Cancer is the leader at whipping up seasonal comfort foods during this time of year such as pumpkin pie, apple cider, cinnamon rolls,” says Mckean. “They say the quickest way to [someone’s] heart is through their stomach and that is how you can find love if you’re a Cancer when the sun transits through Libra this year.”

Also, because Venus will be retrograde this season, everything will be at a good pace, romantically speaking. So go with it and trust in the planets to keep things right on track — and your cooking skills up to par.

While it may not be your season, Leo, you really do shine this time of year. It seems that change suits you and you know how to make it work for you, in terms of finding love and making yourself look top notch at all times.

“If you’re single, you’ll find your romantic partner by regularly visiting the gym or spa,” says Mckean. “If you’re already in a romantic relationship, it’s a time to amp things up and take a romantic weekend retreat. Things look very positive for you as we get past mid-October.”

Although love won’t take the precedence in your life that it did during the summer, it doesn’t mean that it’s not in the cards, Virgo. It’s just that you’ll put your searching on hold for the moment.

“This is a perfect time to wind down and let the chips (or the leaves) fall where they may,” says Mckean. “Finding love when you least expect it is more likely for you this season. It’ll find you, so don’t feel pressed to go searching.”

Happy birthday, Libra! Sure, all the signs are affected by Libra season but, let’s be honest, you’re still the star of the show… until the sun moves into Scorpio.

“This is the start of your astrological new year,” says Mckean. “With the sun returning in the exact position that you were born, you have the chance to set intentions for a new year according to your rules! Since Venus, your ruling planet will be retrograding, don’t pin too much on getting hot and heavy with a new partnership that you want permanency with until after mid-November.”

Since something permanent is a still a couple months away, Mckean suggests you take this time to have fun. “This is a time to flirt, have fun, and playfully find out more about prospective partners through dating,” she says. “Fine dining and wine will play a role in your romantic play this season.”

Your eyes will be wide open and see things and people clearer than before, Scorpio.

“Use this time for sexy photographs,” says Mckean. “With Venus in retrograde, you’ll get a lot of insight on how to really make your sultriness pop through images. Venus in retrograde works nicely for you as it helps you to review exactly who you’re involved with romantically.”

“This year will feel like it’s your personal time to thrive in all aspects of your life, including romance,” says Mckean. “While Venus is in retrograde, you’ll easily find travel partners while you’re in transit that are ideal during your trip.”

According to Mckean, in order for you to find your good fortune, you need to put yourself out there. If you do, you’re bound to come across someone you may have never even considered before — so let them blow your mind.

“This Libra season will be a welcome change for you,” Mckean says. “While you might not find love during this period, you will likely find your future partner. Capricorn, represented by the great mountain climbing goat that almost never stumbles, you rarely ever meet someone and instantly ‘fall’ in love; you make your way towards it.”

So where are you going to find that person? Mckean suggests revisiting your favorite haunts — bars, restaurants, rec areas — anyplace you link to happy memories.

“If you’re single or involved in a relationship, those places will be perfect for helping launch yourselves as a pair into the next phase,” Mckean says.

“During this Libra season, if you’re in the mood for romance, you’ll likely meet them through intellectual pursuits, like visiting a library or going on a trip to a place with a very different culture,” Mckean says. “New and noteworthy are romantic themes for you during this time.”

What does this mean? There’s a good change you might fall in love with someone foreign or completely outside your usually social circle. In keeping with the exotic theme, if you’re coupled up, Mckean suggests venturing off to somewhere new and exciting, to keep the spice alive — or inject the spice where it may have disappeared.

“Neptune, your ruling planet that governs dreams, fantasy, and intuition, among other things, is still retrograde during this time,” Mckean says. “With Venus, the planet of love and romance retrograde as well, you might feel like you’re still working out where you stand romantically, but don’t fret. Your intuition is heightened.”

Mckean says to count on that intuition in matter of the heart and go with your gut — it won’t lead you astray this season.

Although every sign’s love life will be affected differently by this Libra season, with Venus in retrograde, it’s best to keep your mind open to new possibilities and expect the unexpected. You never know how and where you might meet the next love of your life.

You Broke My Heart But I Still Miss You

My Depression Is A Bad Employee In 2022

Here The End Results Of Relationship Will Be, A/c Your Zodiac Dates