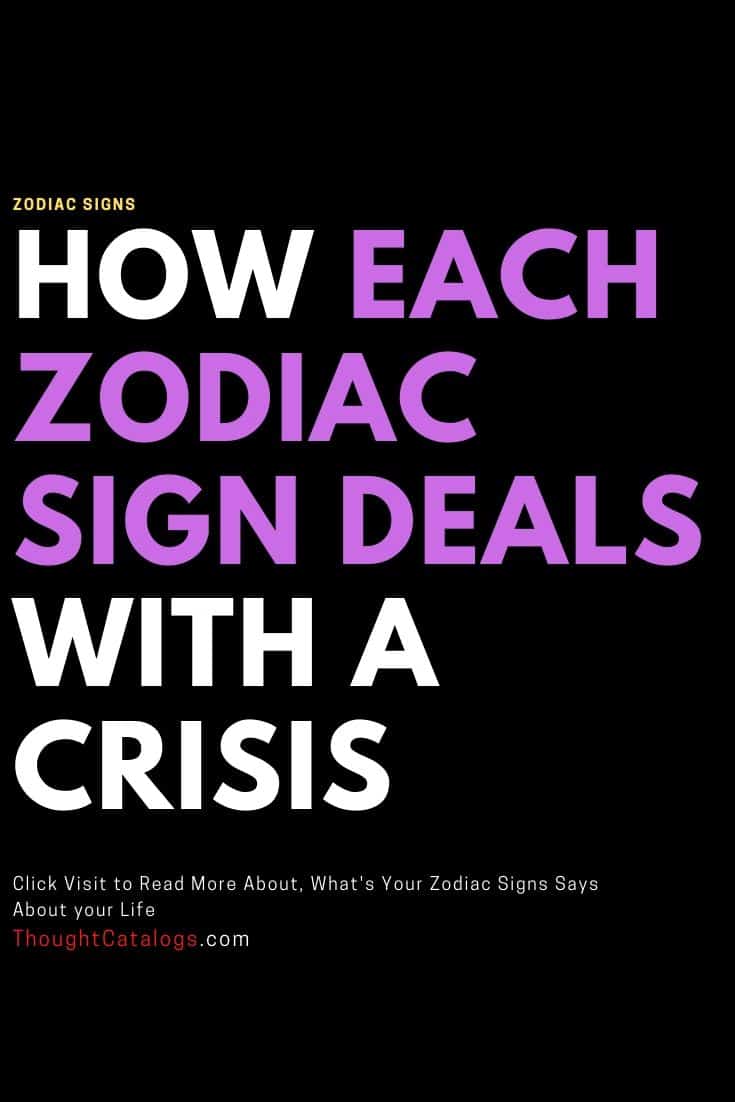 A crisis can be scary, but on the other hand, it’s a good way to get to know ourselves and others on a deep level.

What does that mean? When faced with fear, every person shows what they value and care about the most.

Aries is full of adrenaline and very rash when it comes to decision-making. Sometimes those decisions can be a little reckless, while at other times, reacting quickly can save everything!

Aries doesn’t like overthinking and facing a crisis all alone.

They would rather go out and process it physically, like working out or going out with their friends.

They will never admit how stressed they are, but it’s always obvious because they’re very expressive.

Taureans can be hoarders or stress eaters. For them, food is the ultimate comfort.

They can spend a lot of time ignoring something that needs to be addressed by going shopping or trying out new recipes.

However, they are very practical and cautious and therefore probably those who have lots of cans and extra packs of everything – just in case.

If you never want to feel alone during a crisis, call Gemini. When put under the stress, Gemini can talk so much about so many irrelevant things, it’s astonishing.

But that’s their way of coping with the situation. Also, they’re information junkies and very good at reasoning and judgment, so that’s where you could get everything you need to know. Everything.

It’s a stereotype, but that doesn’t make it less true – Cancer is an emotional creature.

If they’re not allowed to express emotions freely, they’re like a ticking time bomb.

On the other hand, if the flow is good, they can be very inspiring, courageous, and soothing.

Seeing the true value of the things is what makes them go through the worst without losing their minds.

Leo leads when a leader is needed; they have no problem with that.

Great communication and determination are what make people trust them.

Problems arise when they doubt their abilities or can’t admit they’re wrong.

It’s not uncommon for Leos to deal with a crisis very privately because they don’t like when others see them as unstable in any way.

Virgo can panic and become slightly obsessive. They will insist on doing everything the right way.

They have a problem-solving type of brain, so they will search endlessly for an answer.

Nonetheless, their persistence and sharp observance eventually help them get through anything.

When Virgo has answers to a problem, listen to them.

When faced with a decision, Libra has a hard time. That’s due to their smart and emphatic observance – they understand every aspect of the situation.

Being an air sign, it’s possible their mind can be tense, so they should try to relax every way possible.

Libras are great coordinators and communicators, and those are the traits that shine through in the time of crisis.

They can communicate their feelings well and make others feel understood.

Scorpios are always intense but in times of crisis, they can be strangely calm.

It’s because they are thinking about every possible scenario and have been preparing for the worst way before everyone else.

Scorpio is somehow adapted to emergency situations because they’re very aware of the dark sides of life.

However, they tend to be too pessimistic about everything, which isn’t what you need when you’re scared for your life.

Sagittarius is probably the most chill sign during a crisis. They accept things as they are even when they’re not good.

Being optimistic is a quality that’s needed and they have it.

On the other hand, they may do something that’s considered inappropriate and make other people mad. That’s just big proof they literally see life as an adventure.

Capricorn is probably already in their panic room with everything they need for survival for the next five years.

However, this is the time when they realize they need more than material things to feel safe.

A crisis is an emergency call for Capricorns to look inside the self and let go of fear of vulnerability and emotions.

Aquarians are weirdly excited when things are crumbling down and it’s not something to be judged.

After all, they’re ultimate innovators and bringers of the new.

To them, every crisis is an opportunity to make themselves and humanity better.

They should be more considerate of other people though because their enthusiasm in said situations can be scary and redundant.

In a crisis, Pisces can withdraw into their own worlds. That can result in ignoring the reality of things and simply doing nothing about it.

That’s the only way they feel safe. Nonetheless, they react very well to external stimuli, meaning they can protect themself and use their instincts efficiently – something no one would expect.

The Pros And Cons Of Dating Her, Based On Her Zodiac Sign

This Is How You’ll Know That He’s The One

Leo’s Can Roar Like Lions But Become Sweet As Kittens When They’re Around People They Love.

This Is How The Full Moon/Lunar Eclipse Of February 2021 Will...

ThoughtCatalogs - January 24, 2021 0
ARIES HOROSCOPE You have gone very far with your requests, but not everyone has accepted them. You should therefore consider a different hypothesis from the one...