If I could go back to that moment he first used the “I’m bad at texting” excuse, I would slap myself out of that romantic daydream ASAP and see him for who he is right then and there.

This way, I wasted too much of my time and endured a world of pain for somebody unworthy.

I knew the truth deep down: he was just another selfish prick who has no other agenda other than doing what’s convenient for him.

Still, I justified his behavior because I wanted to trust him so badly. I remember thinking that texting is not so important, there are other more important things.

But it is important. Texting, messaging, snapchatting, calling – they are all ways of keeping in touch. They are all small ways to show someone how much you care.

It takes so little time to text someone, yet it means so much to somebody waiting for that text.

So why does it all have to be so complicated when it comes to simple texting?

Along with being lazy and uninterested, there might be one more reason for them not texting – they’re playing games.

By not initiating texting, delaying replays, or replying late, they want to make themselves seem out of reach so you can chase them.

Perhaps they are counting on women to want what they can’t easily have. Which is true – to a point.

But somebody should tell them that women also don’t appreciate someone messing with their heads.

If you don’t like that either, simply don’t play along. It will just come out to bite you in the end.

“I am not into texting,” and all the varieties of that excuse are lame. A decade ago, this could pass as a solid excuse, but today it’s just ridiculous.

Texting is one of the easiest forms of communication these days and any adult person who says that they are a bad texter should feel instant shame.

He did receive your text.

In this modern era, one thing is for sure: he did get your text.

Unless his phone is powered off, stolen, lost, broken, or drowning in his toilet bowl, they’ve surely already read your text.

There is no need for a follow-up text, because that’s never a good idea and it just makes you look desperate. He doesn’t need that ego boost.

Naturally, if your text came at some inconvenient hour – for instance, when he’s sleeping – he can’t respond immediately.

Still, he should send you a reply as soon as he can. It’s a basic form of respect.

You know how the “I’ve been busy” story goes.

You don’t need to hear it again.

He will say that he was super busy and didn’t have time to reply (till the next day),  he didn’t checked in because he was swamped at work, and all the excuses in between.

Come on, nobody is that busy. I think that the busiest person on earth takes a moment of his time to text their significant other.

It’s all a matter of priorities. It’s all about how much someone cares for you.

The ugly truth that no one wants to hear is: If he really cared, he would text.

Even if he is the worst texter alive, he would make an effort. He would call. He would find time to see you more often.

He would do the impossible before saying that he is bad at texting.

Everything else is an excuse.

Be honest with yourself and save yourself a lot of pain and disappointment later on.

If the reason he is supposedly “bad at texting” is lack of his interest in you, then it’s pretty clear that you should try your luck somewhere else because with him there will be none.

He is probably playing games and keeping you on the bench by only texting occasionally. If he was into something more, he would text at least once a day.

Even if he is just too lazy to text, he is still not worth your time.

If he is unable to do the bare minimum – like texting you goodnight or good morning – right from the start, imagine how bad things are going to be later.

So, I trust you to know better next time you meet someone who says he is a bad texter and simply look the other way.

Because a man who doesn’t make an effort isn’t worth of yours either. 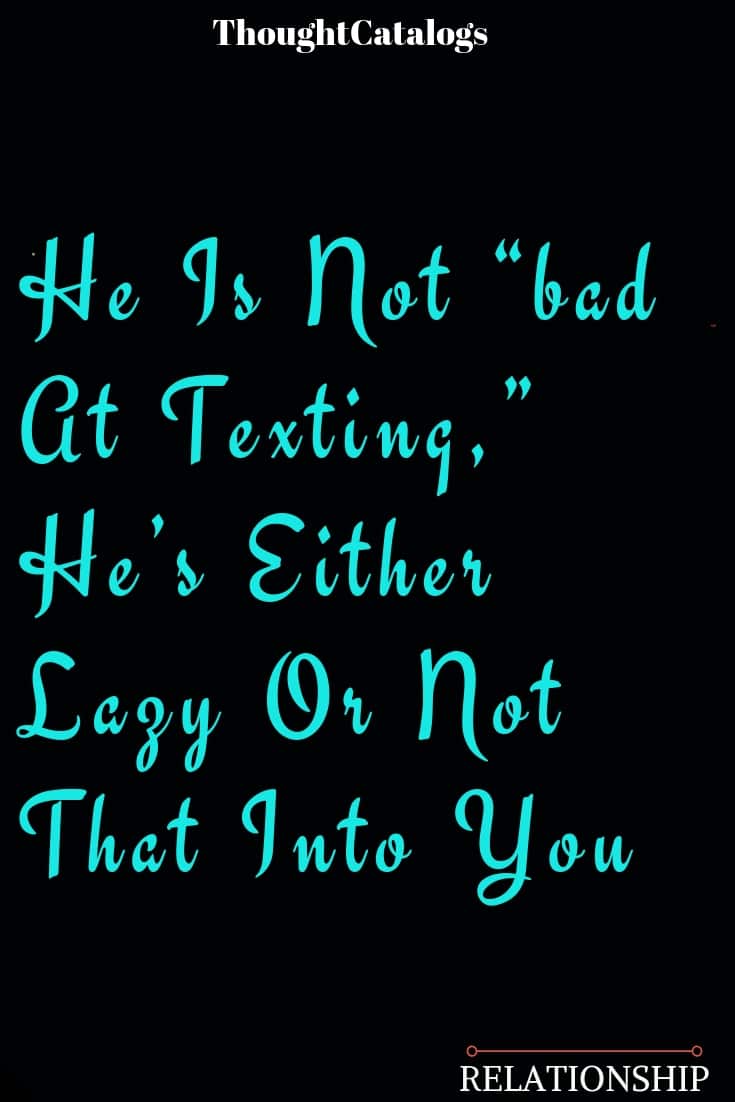 Why Is He Your Priority When You Are His Option?