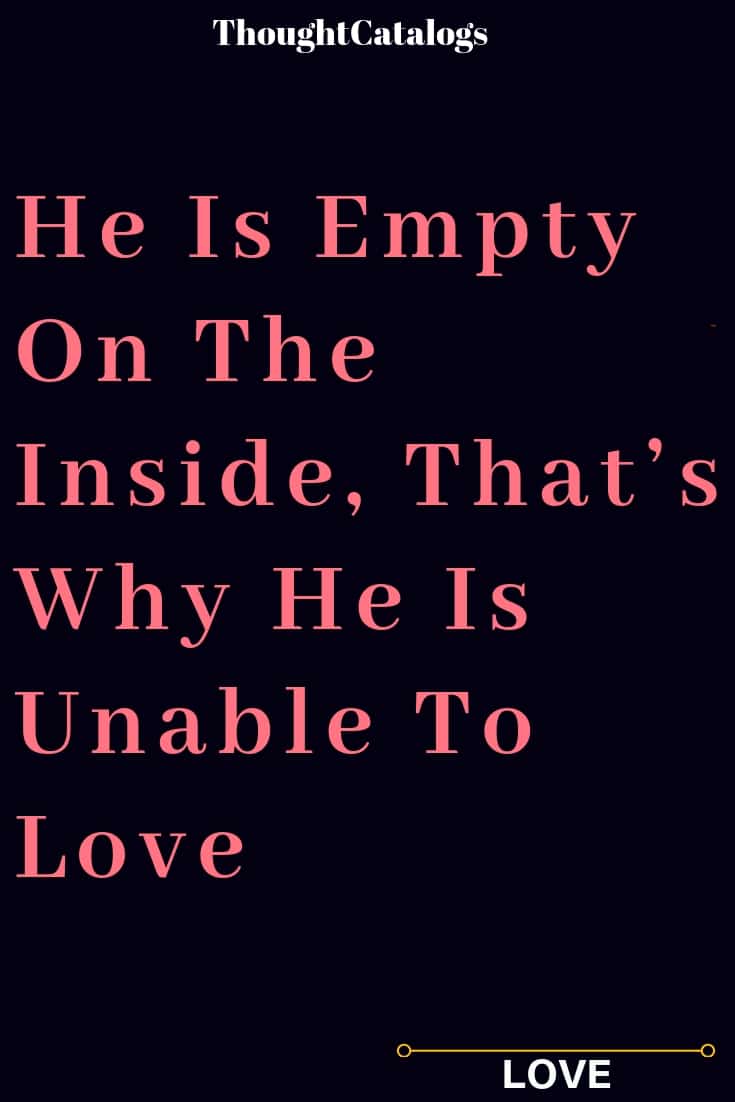 Looks can be deceiving—he taught me that, all too well. I never imagined who he really was underneath that perfect exterior he so skillfully created. I could never have guessed that he couldn’t love me because he had nothing left to give, he was completely empty on the inside.

I couldn’t resist him. There was something that drew me to him, something that just seemed familiar. It made me feel safe. His behavior, his sweet talk, and his smooth ways made my walls tumble down. I trusted him. I fell in love with him in a split second, without fear or doubt, without thinking too much. I just followed my feelings, completely unaware of what lay ahead.

For the life of me, I could never have imagined that someone could be so cold and calculating. But now I know he never intended to stay. He had it all mapped out, I am sure of it. I have this feeling he had done it a million times before so he knew his game plan well. He was protecting himself from love and hurting me in the process.

He knew what to say and when to say it. He knew how to give me just enough. Just enough of himself and his emotions that I would hold on to and crave him more and never enough to feel like he was completely mine.

He knew how to be so close and so distant at the same time. He made a plan and he executed it. He lured me in by making our beginning so incredibly beautiful. And when he saw that my feelings were growing, that I was already attached, that’s when the other part of the plan started.

Everything changed gradually. He started changing the little things in our relationship. For example, texts became less frequent. He would text me, I would text back and then I wouldn’t hear from him for hours. He had a lot of similar texting games, and as easy as it had been to talk to and text with him in the beginning, now it had become frustrating and difficult.

He hardly ever had time for me. Everything was more important and I always came last. When he would finally find time for me, he would keep me so close and he would be so loving that I would fall even deeper in love with him. It was almost like he was making amends for all that time he had deprived me of.

And as soon as he was out the door, everything would start all over again. He would become distant again. Then he would serve me crumbs of his attention and affection just so I would have something to hold on to. He would draw me in when he would see that things were getting too hard to handle, then he would go overboard when I was pulling away. He did it to me over and over again until he left without so much as a goodbye.

That lack of goodbye hurt more than anything because I couldn’t see all that was flawed in our relationship. All the problems we had never seemed unsolvable. I just kept on waiting, giving him all the time, space and understanding he wanted. Him leaving was totally unexpected. I blamed myself.

I couldn’t see how much damage he had left because I kept sugar-coating everything. I kept holding on to this perfect image of him that had no connection to reality. I kept waiting for him to come back. But he never did. He must have moved on to his next conquest. He will do what he always does—he will make somebody fall for him without any intention of loving her back.

Only after he was no longer a part of my life, after I’d had a chance to think and unwillingly overanalyze every aspect of our relationship, did everything start to make sense. He told me about her, about his ex, about the one who destroyed him. He was so broken that he never really managed to fix himself. It just left him numb and empty.

That’s why he put those titanium walls up, got his game on and put an indestructible shield in front of him to protect him from potential hurt. It saved him the hurt but it never allowed him to be happy or to love again either.

It was easier for him to hurt me and move on to the next girl than it was to really open up to me and let me in. He felt safe and in control knowing that I cared more and that I couldn’t hurt him. I guess he decided it was time to go when he started caring more for me too. I am not saying this to justify what he did to me. I was also broken and I didn’t go around destroying other people.

In the end, I only feel sorry for him. He became so good at dodging the pain that he dodged love too. It must be sad being him. He knows something will end before it even begins. He plans an escape route every time he starts a relationship. He is running from his feelings to cover up the fact that he is still so unbelievably broken.

He never healed and now he is walking around with this numbness and emptiness inside of him that doesn’t allow him to truly feel anything again. He doesn’t allow anybody in because the stakes are too high, the pain is too great. But there is still one thing I don’t get—“How could he hurt me, knowing exactly how it would make me feel?”

This Is What It Really Means To Make Her A Priority

The Ideal Age To Get Married Based On Your Zodiac Sign

Here’s Why You’re Terrible At Relationships, Based On Your Zodiac Sign

The 3 Zodiac Signs That Make The Best Wives

The Thought Catalogs is your information, home entertainment, fashion, educational website. Our Web Content Writers & Publishers give you the current breaking news as well as video clips directly from the entertainment industry. The Idea Catalogs established in 2018 with the sole purpose of adding worth to individuals' life by supplying them the motivation with trustworthy items of information to our site visitors with Favorable Feelings|Astrology Reading|Partnership Truths|Lifestyle|Home Decor Ideas|Style Tips. Since times we have gotten the depend on of our consumers as well as readers with our persistance and also dependability. Our initiative as well as contents result as represents our high quality services with our products too.
Contact us: thethoughtc[email protected]
© Copyright © 2021-thethoughtcatalogs.com. All rights reserved
MORE STORIES
Love advice

ThoughtCatalogs - December 18, 2019 0
1. If you don’t work on yourself Working on yourself is not only important to find love but for your self-growth as well. Only when...