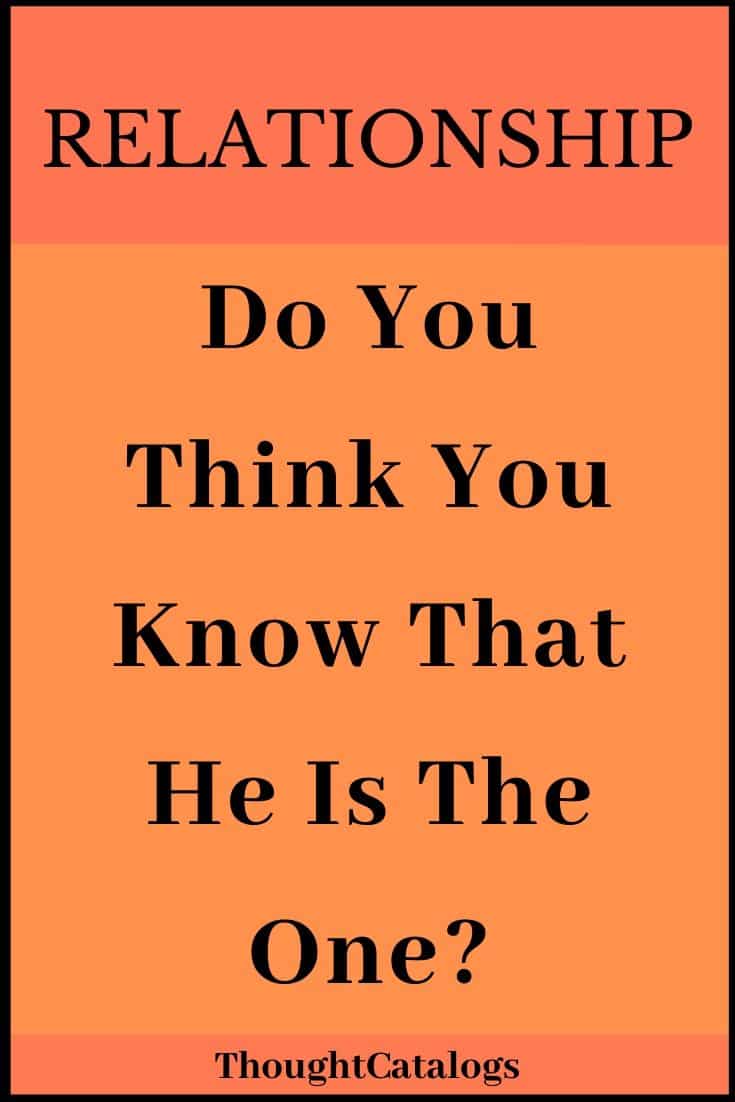 Before making this beyond complicated, I will tell you the truth from the start. The truth is that you don’t know and you will never know. But you can feel.

Knowing and feeling are two contradictory directions and when intertwined they can create a realm of confusion, uncertainty and even depression.

Have you ever looked at your man and started thinking ‘how in the world can I be sure that he is the one?’ After that, you start weighing up some pros and cons, rewinding scenes of his socks under the bed or that last cake eaten by him…

Then you realize that there is no point in making a list of an ‘anti-perfect man’ and you start begging God and his assistants to enlighten you.

But the only problem is that you put too much effort into the knowledge and facts about your man instead of listening to your intuition and gut feeling. Knowing and feeling are two contradictory directions and when intertwined they can create a realm of confusion, uncertainty and even depression.

1 STOP ASKING YOURSELF IF HE IS THE ONE

Do you know the feeling when you question something to the extent that it becomes a haunting nightmare? If you want to forget that feeling (and I certainly would) then you have to stop asking yourself if he is the man who’s going to pick you up in his spaceship and introduce you to his crew (aka his parents) all the while exploring the endless extent of space that is love.

Kidding aside, you have to reach the level where you know that you don’t know that he is the one. Try repeating: “I don’t know if he is the one and I don’t give a damn. I will not let this overrated question manipulate me. I’m a strong, independent woman and I choose to live carefree.”

Being too occupied with questions and answers kills all the fun and spontaneity that are crucial to your well-being. For example, your head is in his lap and he’s playing with your locks while you’re questioning his existence along with the whole universe and the theory of gravity.

He will know. He will know when you start asking yourself these questions because men have that weird radar that tells them every time that something is fishy about their woman.

To avoid this, concentrate on feelings. If you feel like you’ve attained nirvana (and I don’t mean the band) when just hanging around with your man—THAT’S IT.

That’s the thing we’re looking for. Just listen to your intuition and embrace the feelings you get when thinking of that specific person and you’ll get the answer.

3 HOW CAN I BE SURE THAT MY FEELINGS ARE NOT DECEIVING ME?

YOU CAN’T and that’s the beauty of it. But if you’re sure of your own existence, that will do. Cogito, ergo sum (I think, therefore I am).

Thinking about something proves the fact that we exist but it does not validate our feelings. For example, Miranda says that she is sure that Jim is the one because he is such a good person.

What the hell?! What does that even mean?

Miranda probably thinks that Jim is a good person for a million other reasons that correspond with her definition of a good guy. But how does that make her feel? The real question is how he is making you feel.

Do not think. FEEL.

P.S. If he can drive you beyond crazy and you still don’t want him dead—he’s definitely the one.

This 2021 One-Sentence Reminder You Need To Hear Right Now, According To Your Zodiac Sign

These 5 Zodiac Signs Will Win Every Fight

Strong Women Need Men That Are Even Stronger

7 Types Of Men You Should Date At Least Once

These Are The 21 Amazing Signs He’s Ready To Propose

7 Empowering Reminders For A Girl Healing From A Toxic Breakup

100 Heart Melting Love Paragraphs For Him And Her

ThoughtCatalogs - April 4, 2019 0
Let’s face it. As much as we might want to deny it, there are just so many women out there who make the mistake...