A highly toxic relationship with an emotionally or physically abusive partner can cause trauma that will follow the person who experienced it a long time after the relationship has ended.

Even though the term post-traumatic relationship syndrome is a newly-proposed mental health term, it’s very real to people who are actually going through it as we speak.

The thing with post-traumatic relationship syndrome is that it has similar characteristics to an actual PTSD. The fact that a toxic relationship can harm a person in that way is really horrible.

If you have been through an emotionally or physically abusive relationship, you might not even be aware that you are going through something that serious.

It’s really difficult to uncover that the thing at hand is actually a relationship PTSD because the symptoms are pretty common and may have other causes outside of the toxic relationship.

1. You both fear and crave commitment

You decided that you wouldn’t rush into another relationship after the toxic one you experienced. But it’s already been too long and you’ve refused all date invitations.

You desire closeness with another human being but at the same time, it’s your biggest fear. The last time you let somebody in, you just gave him the tools to hurt you.

You are afraid that the same thing will happen again—that if you allow yourself to fall for anybody again, you won’t see them clearly.

You didn’t see all the early signs of manipulations and red flags of abusive behavior and you are afraid you won’t be able to see them now either.

2. You see no silver lining

Your experience turned your life upside down. From someone who always tried to see the best, you are now fearing the worst so much that it makes you anxious.

All the scenarios you predict always have a lousy outcome. You often find yourself thinking that you are cursed because everything you do falls apart.

In reality, your pessimistic thoughts invite negativity into your life. For example, if you fear your boyfriend will abandon you, you will harass him with it that much that he will see no other option but to leave.

Before the relationship, you never noticed that you were filled with self-doubt. You had no problem trusting your judgment or making decisions.

But now it’s all different; you feel like you are unworthy and confidence is no longer a term you are familiar with.

The thing is, emotional abusers prey on your confidence first. They will make it their life’s mission to ruin that. If you have any insecurities, they will do their best to use them against you.

Once you are filled with insecurities, it’s easier for them to manipulate you and dictate your life so it serves them.

4. Settling for less than you deserve in your next relationship

Even though the abusive relationship ended and you want to start something new, there is a great chance you will settle for just anything.

The thing is, your reality gets distorted from everything you have been through and you start believing that anyone who treats you a tiny bit better than your ex is good for you.

If you stop and take a look, you will realize that it is easy for your ex to be overshadowed. He was the worst and everything after him is an improvement.

However, that doesn’t mean that you should settle for just anything. You need a normal, healthy and loving relationship and being with someone who isn’t right for you will keep you far from it.

Having flashbacks is something that usually happens to victims of physical abuse. They are in constant fear that the same thing might happen again.

Also witnessing something familiar or connected in any way to the abuser can trigger flashbacks and bring you back to your greatest fear.

When experiencing a flashback, you will feel like everything is happening right now. You will be able to see, smell and feel the exact situation you are reminded of.

6. You suffer from insomnia and have nightmares

Dreams are directly related to our subconscious. When you go through a highly toxic or abusive relationship, your subconscious will deal with all the things you are repressing.

Waking up after dreaming you’re in cold water or screaming and gasping for air after a nightmare are things that people who are experiencing relationship PTSD often encounter.

Insomnia will also be present. After everything you have been through, the hardest thing is falling asleep peacefully.

The trauma and stress you have experienced in your relationship might be easily reflected by your health. The first sign that something is wrong is the start of rapidly gaining or losing weight.

Other signs of health problems that might be caused by a toxic relationship will show later on, like high blood pressure, gastritis, an ulcer, or sudden skin conditions.

8. You can’t stop blaming yourself

If you were with a partner who had a habit of playing the victim, taking the blame for everything will be something that you do.

He probably kept telling you that it was your fault, that you provoked his bad behavior or abuse. Even though deep down you knew right away that wasn’t true, you kept questioning yourself.

The consequences of that emotional abuse stayed incorporated in you. You are still questioning if there is anything you could have done differently that would have changed the outcome.

You also might be blaming yourself for not being able to see everything that he was doing to you sooner. In reality, none of it is your fault—you are just used to blaming yourself.

9. You are dealing with anxiety

You might easily become anxious after surviving a toxic and abusive relationship. The most common symptoms are racing thoughts, an inability to breathe properly, sweaty palms, panic attacks, etc. Anxiety is closely related to relationship PTSD.

If you believe you are suffering from relationship PTSD, don’t hesitate to ask for help. You are not alone in all of this; there are a lot of people who have been through the same. That’s why there are support groups.

The worst you can do is do nothing, so at least start by telling somebody about everything you have been through and it would be best if that someone was an expert.

Relationship PTSD can be cured. None of this was your fault and the first thing you need to do is believe it yourself. 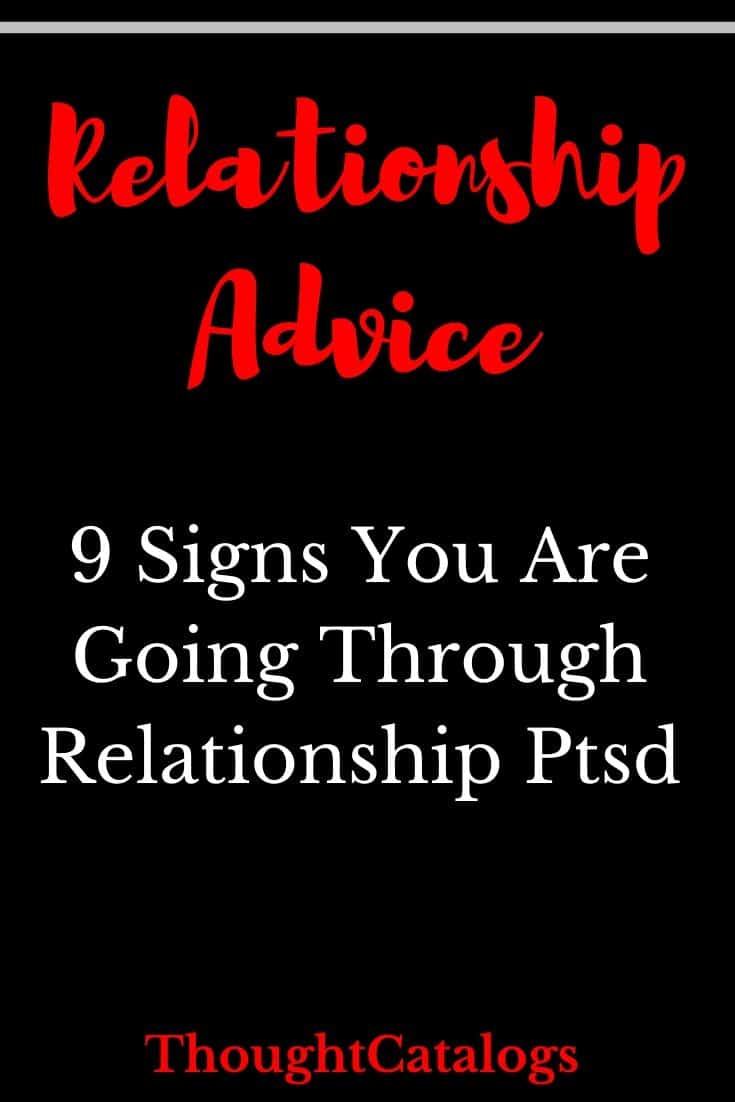 13 Signs Of An Immature Relationship

10 Signs That Your Boyfriend Plans On Staying An Immature Brat