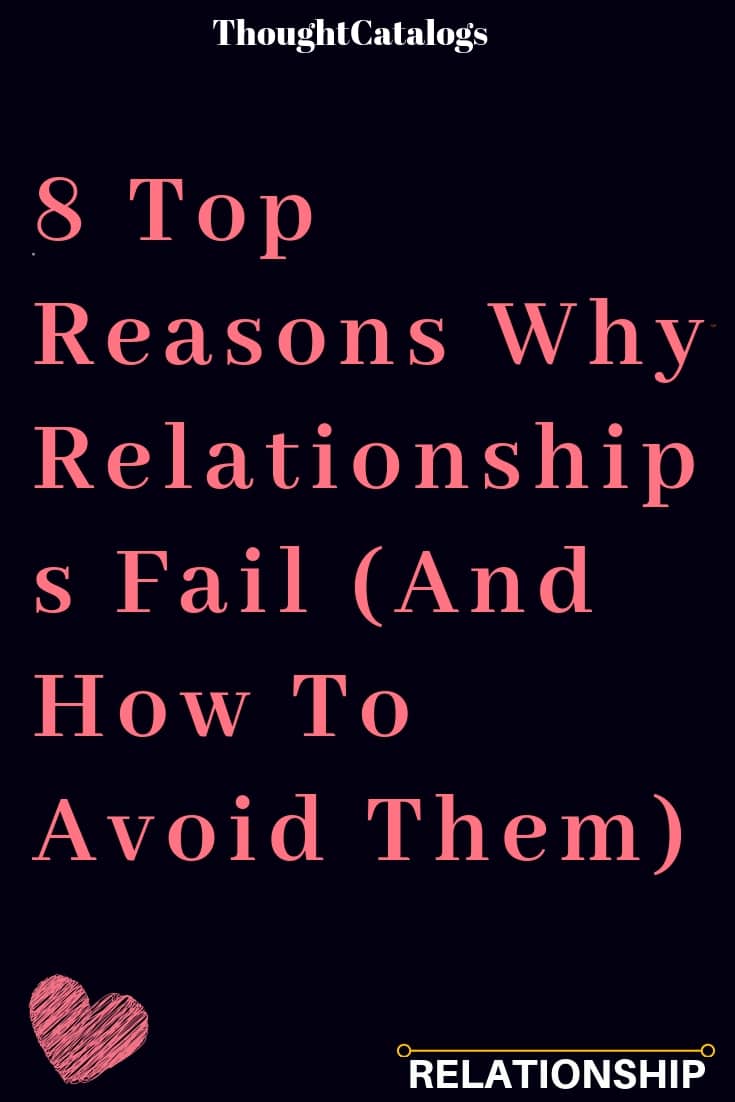 You cannot put a finger on why relationships fail for certain. There is always more than one reason that contributes to a breakup.

If there has to be a major reason responsible for a relationship fail, I’d say it’s different priorities. Each person values something else. If your significant other considers relationships to be something you don’t agree with, it’s only natural to expect those kinds of relationships end.

I know that we all are in a constant search for a healthy relationship. However, even when you find that relationship, there is no guarantee that it will last.

The reason for that turn of events is quite simple. People change. As people change, relationships change too. The person you fell in love with cannot be the same person after some time passes. So naturally, your true love doesn’t have to remain your true love.

The thing I’ve learned after observing people in relationships around me and my current relationship is that hard work is the recipe of every relationship success.

It’s important to keep investing in your relationship. Even more important—don’t give up after the first obstacle.

The list of reasons I’m going to mention as potential relationship killers are not the same in every long-term relationship, although these are the most common reasons out there.

If you are tackling some of the listed problems, I’m offering the best possible solutions to save your relationship.

Trust issues may appear because of two reasons. Firstly, if one person in the relationship constantly makes promises and breaks them, it’s logical for trust issues to rise.

Secondly, problems with trusting another person may appear out of nothing. Or better said, trust issues can appear because of groundless jealousy.

This happens when one partner is jealous because of no good reason. His or her accusations are based solely on emotions. There is absolutely no proof to support their accusations.

So, when it comes to these two reasons, it’s obvious that the first one is a lot more solvable.

If your partner breaks their promises, talk to them calmly and explain to them that you don’t need anyone to feed you empty words; rather don’t say anything than promise something you cannot fulfill.

There is a possibility to save your relationship if your partner understands what you ask them to do. Regarding the jealousy, sadly, there isn’t much you can do.

Jealousy is a strong and often very hurtful feeling which cannot be easily removed.

How to deal with trust issues?

Be transparent, be honest and never break your word. Ask openly for what you want and work on your relationship from the beginning, not once the problems have already appeared and it’s too late.

Remember, poor communication is the enemy of the relationship.

It’s easy to fall in love with someone but it’s hard to make the relationship a successful one. It takes a lot of understanding, hard work and compromise.

If you enter a relationship thinking everything will go your way, you couldn’t be more delusional. Love requires your ego to be left out completely.

We all have an ego but only the ones strong enough to restrain it can make their relationships work.

When you’re in love, your relationship won’t be all roses and sunshine. There will be situations where your opinion and your partner’s opinion clashes.

In those situations, it’s important to find the middle ground. That’s where your ego has to be restrained. Otherwise, it can lead to a disaster, especially with your loved ones.

How to deal with your ego?

You are required to make a system that will work. Firstly, what you absolutely have to do is stop thinking only about yourself. When you are in a relationship, you’re becoming a team. There is no more ‘me’. Now it’s ‘we’.

Keep your ego under control by thinking your decisions through. Definitely never decide anything for yourself. Always consult your loved one.

Naturally, this is also connected to communication, so by avoiding your communication issues, you’re indirectly dealing with your ego as well.

3. A lack of loyalty

Loyalty and infidelity are closely related. Actually, where there has been a lack of loyalty for some time, infidelity usually appears.

Some relationships get even stronger after an incident and some fall apart. It depends on how much you trust your partner and if you’re willing to give him a second chance.

Most relationships fail because one person doesn’t pay attention to the other as much as they should.

They take their partner for granted and in time they do something stupid which makes the other person lose trust in the person they love.

How to deal with a lack of loyalty?

It’s pretty straightforward. You have to trust your partner from the beginning. You have to be loyal and devoted which are not hard things to do if you love each other.

Loyalty comes as the default setup in a loving relationship. Actually, if neither of you are loyal, you don’t even have to bother to keep the relationship alive. You cannot force someone to become loyal.

A couple doesn’t have to experience this at the beginning of the relationship and actually, it’s not usual for that to happen.

The problem of different priorities comes a bit later on in a relationship.

What happens is that at some point in the relationship, the couple goes their separate ways. Their priorities and their outlooks on life are no longer the same.

So naturally, they don’t agree on everything anymore which makes their union slowly deteriorate until it completely falls apart.

How to deal with a dissonance in opinions?

It’s not the end of the world. If you or your partner has interests which are no longer the same as the other’s, have an interest that suits both of you.

There is a reason why you fell in love with each other. There is a core where your love came from. That cannot be changed. It can only be forgotten.

So, find something both of you can enjoy and reconnect with your partner to remind yourselves where you came from and how it all began.

Sometimes all the boxes can be checked but the couple isn’t right for each other. They are not getting along. Everything about their relationship seems uncomfortable.

A lot of them force themselves to continue being in that relationship but over time, the dissatisfaction becomes overwhelming, so they break up.

Your hopeless tries to stay with someone you’re not compatible with can only harm you and your self-esteem. When there is no compatibility, it’s better to end things sooner than later. There is a lot less damage if you end it at the beginning.

How to deal with a lack of compatibility?

It’s impossible to be entirely compatible with another person. If they don’t show interest in the same things you do, maybe you should try showing interest in something they do.

This way, you’re opening up your life to something new and there is a great possibility of saving your relationship.

Remember that relationship compatibility can only be achieved if you come out of your comfort zone—both of you. If you expect your partner to completely adapt to you and your wishes, you are very wrong.

Due to judgment, criticism or sarcasm addressed to the other person in your relationship, they may develop contempt on their part over a certain amount of time.

Where there is a lack of communication when it comes to solving problems, other issues like this one rise to the surface. That’s why it’s important to face every little thing bothering you right away.

How to deal with a lack of communication?

Communicate, talk to your partner and tell them how you feel. Tell them their behavior makes you feel uncomfortable.

If talking about the problem doesn’t help solve things, then it’s time to call time on the death of the relationship.

Everyone is so busy nowadays, especially with the Internet and social networks getting wild. No one has the time to devote themselves to someone else.

People hardly find time for themselves in their busy schedule called life, so it’s not surprising they don’t have the time for the person they love. This lack of time is what contributes to people drifting apart from each other.

When this happens, it’s hard to keep the emotional connection alive. Sooner or later, that relationship is going to end if it keeps going in the same direction.

How to deal with a lack of time?

Spending quality time with someone you love is a big deal. If this represents a serious issue for you, there are some tricks that can help you organize your time better.

Find things you both like and schedule to do them together. Or try to determine, for example, half an hour to spend with each other before you go to work and when you get back home from work. Have coffee together, go on regular dates or plan trips.

There are a lot of tricks you can use to force you both to spend more time with each other and therefore save your relationship.

Money plays a big role in any relationship—it doesn’t matter whether you’re married or not. Money is closely connected to the feelings of safety and security. Where there is no money, it’s logical that one person will assume that the other one isn’t trying hard enough to provide.

It may sound funny but the human psyche works in mysterious ways. Where there is no money, problems start piling up. Also, because of the financial worries, people in the relationship are always on edge.

So, things that wouldn’t normally bother you that much irritate you when you’re broke.

No matter what happens between you two, if you love your partner, you won’t let him go that easily. Before you start reading articles such as ‘signs your ex will eventually come back‘ do absolutely everything you can to save what’s left and what’s worth saving.

Then you’ll be able to say: “I’ve tried everything but it just wasn’t meant to be.”

These Are The Most Irresistible In September Zodiac Signs

A Libra Is Skilled Enough To Be One Step Ahead, But Make You Believe They Are One Step Behind.

The Most Heartbreaking Note Ever Gotten From An Ex

I DON’T WANT A LOVER—I WANT A BEST FRIEND

If Zodiac Signs Were What Will Be Your Downfall In 2021, Based On Your Zodiac Sign

ThoughtCatalogs - May 14, 2020 0
The thing that sucks the most about being single is the societal belief that you’re better off in a relationship. That you must be...