8 Things To Do When You ‘drink And Dial’

7 Reasons Why A Guy Is Calling You Baby, Based...

Ranking The Zodiac Signs By Who Is The Most Protective...

These Are The Zodiac Signs Who Have The Hardest Time...

Drinking and texting is an issue. But drinking and dialing is a recipe for a real catastrophe (at least in the mind of the doer).

It’s interesting how we’re rarely tempted to do certain things when we’re sober but when alcohol kicks in, we find ourself doing things we never imagined doing beforehand.

And after you’ve done it, you feel like the only thing you can do is recall the shameful event and pray to God that they didn’t take you seriously. You swear that you’ll never get drunk again and you’ll get rid of your phone for good.

But we all know that these are lies and the chance that you’re going to repeat the same mistake is pretty high. But even if it comes to this again, there are some things that can help you cope with this act of incidental embarrassment.

The first thing that you need to do is try to remember every single word you said on the phone last night. I know everything will be fuzzy in your head but try hard to think of every single detail that happened last night and that will help you remember your call as well.

Once you’ve recalled the ‘sinful’ act, it’s time for an evaluation. Pay attention to the context of your words and whether you’ve offended them in one way or another.

If you realize that what you’ve done is not that bad after all, you’ve got nothing to worry about. Just forget about it and move on with your life as if nothing happened.

If you’re not sure whether you’ve done something wrong or not, you can always text them in order to test it. Ask something unrelated to your call and wait for them to text you back.

If they don’t reply immediately, don’t start panicking because this doesn’t necessarily mean that they are mad. Perhaps they’re occupied with something else at that moment. Be patient and play it smart.

If they text you back or you’ve somehow figured it out on your own that you fucked it up last night, consider apologizing. You can call them again (but make sure that you’re sober this time) and simply explain that you didn’t mean the things you said to them.

I’m sure they’ll be more than happy to accept the apology and they will understand the situation. After all, I’m sure they’ve done the same thing when they were drunk and they have no reason  to blame you.

After you’ve apologized to them, leave this thing in the past. Even if you didn’t apologize, there’s no need to overthink the same situation again and again because nothing good will come of it.

Know that shit happens and it’s totally normal to make mistakes from time to time and that doesn’t make you sinful. You’re a human being just like everyone else and you’re allowed to fail and rise, fail again and so on. You’re allowed to learn from your mistakes.

6. Ask for help from your friends

If you’re afraid that you’re going to repeat the same thing once you get drunk in the future, ask your friends to keep an eye on you when you’re in the act of drinking and having fun with them.

You can also ask them to take your phone away from you for a few hours so that you can be 100% sure that you will not be tempted to dial that unlucky number.

Also, make sure that your mind is free of any guilt or suppressed emotions and that nothing’s bothering you because when we drink, we do the things we’re afraid of doing when we’re sober.

If you have some issues with someone or with yourself, make sure that you deal with them when you’re sober so that they don’t reappear every time you get drunk.

8. Block them and delete their number from your phone

If all else fails, consider blocking them on social networks and deleting their phone number. You know what they say, ‘out of sight, out of mind’.

Once you’ve deleted or blocked them, just keep being persistent not to unblock them because that way you’ll never break free from the curse called ‘Drink and Dial’. 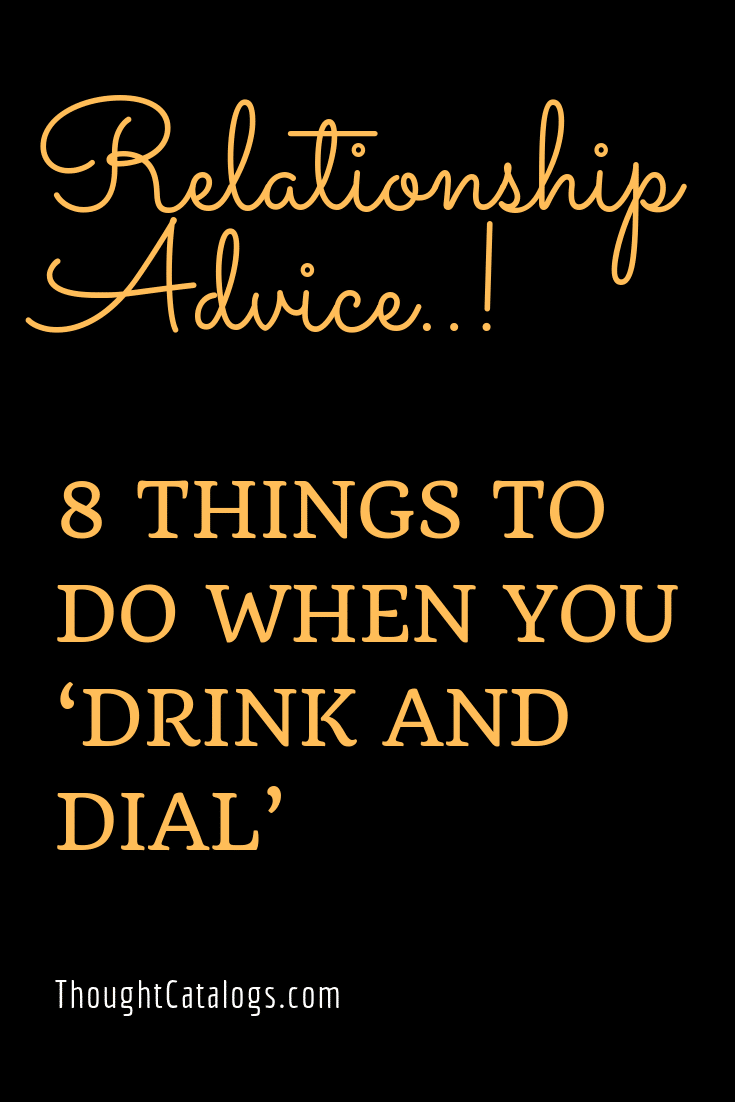 Top 10 Fantastic Reasons Why You Should Absolutely Date A Gamer

Why Dating A Gamer Is Actually The Best? If you’re dating a gamer guy or are simply wondering what it would be like to date a gamer in real life,...

Two paths are mosting likely to cross one day or one more, and every little thing complying with that going across is going to...

Tuesday will be under the influence of slow-growing events, which can uproot the more active among you. You will have a lot of work to...

Saturdaywill be a day with slower growth of your events and strategies, and so be it. Today, more than ever, you require comfort and...

1. He calls and texts first without making a fuss about it If your man can’t be bothered to actually text you first every now...
𝐓𝐡𝐞 𝐭𝐡𝐨𝐮𝐠𝐡𝐭 𝐜𝐚𝐭𝐚𝐥𝐨𝐠𝐬 is an Educational & Entertainment Platform theme. Our Team Publishes 100+ Content On Weekend/Monthly. We will motivate the needs of any person & make them inspire instantly You, Will, admit Once You Begin Your Journey With Us. The Thought Catalogs platform is a perfect choice.
© Copyright © 2022 - All Rights Reserved | TheThoughtCatalogs.