It’s not hard to notice the difference between casual s*x and the real thing. Not that there is something wrong with casual s*x or one-night stands but that is not something you want for the rest of your life.

It’s perfectly fine to have a night of passion with no strings attached but it’s even better to make love to someone you actually love. It’s an entirely different experience.

The emotions you feel while having s*x with the love of your life are just so strong and there are no right words to explain it.

Your partner can make you feel things you never knew existed. He can show you a completely different side of you you’ve never seen before.

It’s a given that you’ll come across men who will fake love and present themselves as something they are not. You simply can’t avoid that. But true love is easy to recognize.

It may take days or months but no one can fake it for that long. If you look at it closely and rationally without involving your emotions, you’ll definitely figure out whether he loves you or not.

1. He will communicate during s*x

He will tell you he loves you in the moment of passion and he will ask you what you like and what you don’t. He won’t be selfish.

Men who have no other interests other than just having s*x with you won’t care about what you want. They will only look out for their best interests and make sure they are enjoying themselves.

2. He’ll show you his emotional side

When a couple gets together, love shows the most in the first few months, especially during s*x. If a man truly loves you, he will get emotional.

He will show you his soft side and that does not make him weak. That is not something you should worry about.

Even if he cries, don’t freak out. You didn’t do anything wrong. Moreover, you did absolutely the right thing—you provoked emotions he hadn’t felt in a long time.

3. He’ll look you right in the eyes

This is one of the best body language signs that a man is into you. He will look you directly in the eyes because he cares for you.

That’s the biggest proof that he loves you. Because if he saw you just as something casual and on the side, he wouldn’t maintain eye contact. He would only do what he came to do and leave.

This way, he wants to see deep into your soul and he wants you to know that he loves you.

4. He will be extremely romantic

Sure, players can be romantic too, especially if that is going to give them something they want, like s*x. But, like all things, you can also differentiate between a fake romance and a real one.

A man who loves you will take his time. He will slowly work up to the main part, while a player will act all romantic but he will rush things to get to the part he wants the most.

5. He will carefully choose the place

He won’t jump you in a corner of the house and get at it. He will choose the place carefully. It will probably be somewhere where you feel comfortable and relaxed.

He doesn’t want to make you feel cheap because he respects you too much. And where there is respect, there is love. Those two things just have to go together.

6. He will kiss you everywhere

He will take care of every inch of your body. It’s not just about one kiss and then it’s over. He really takes his time. He’ll bite you and tease you. He’ll work his way through your whole body.

His kissing will be sensual and deep because it’s honest, it’s true and he enjoys it as much as you do. Not a single part of your body will be left out.

And then when you can’t take it anymore, he’ll move on to the thing the both of you have been waiting for.

7. He will love your imperfections

He will never make you feel bad about something you’re maybe ashamed of. He will respect it and at the end of the day, he’ll love it because that is something that makes you unique.

Your flaw is something that makes you different from all other women. That flaw is what he loves the most about you.

8. He will just feel right

When you’re with him, it just feels right. After having s*x, you feel loved and cherished. You don’t feel used or indifferent like after casual s*x.

A man who loves you will sweet talk you and make you aware of how much he loves you. He wants you to know that he’d give his life for you and that he doesn’t want to lose you. And after all, you feel and know that. 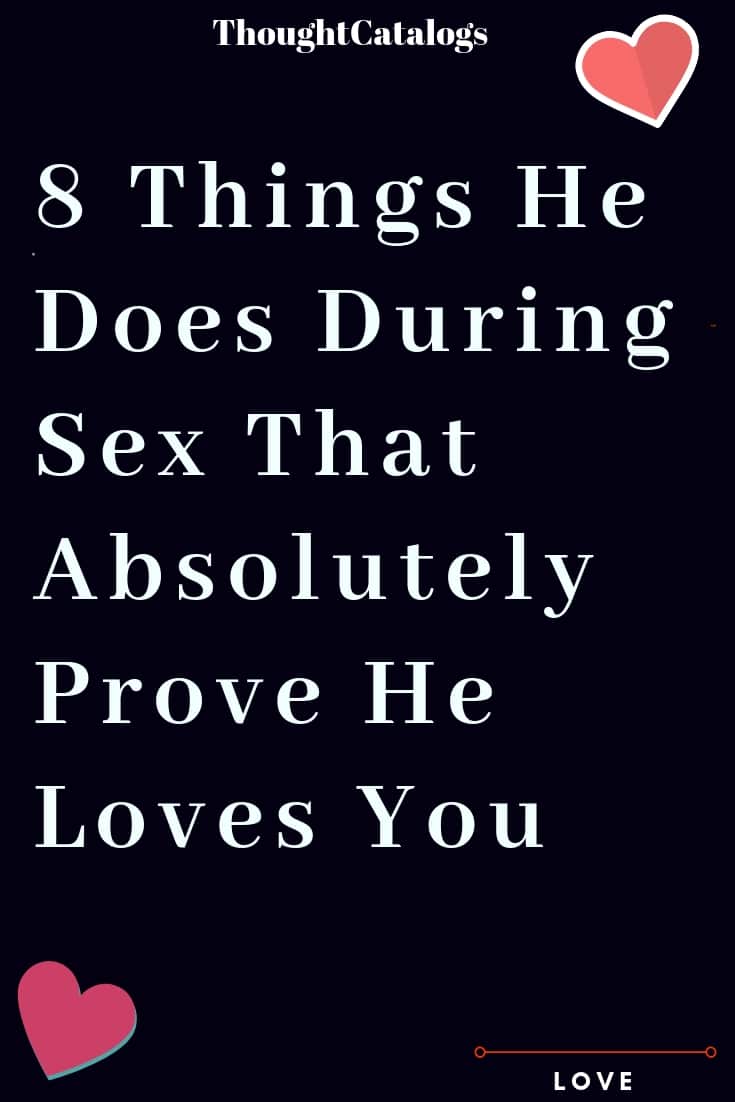 Do you feel like you always get the shorter end of the stick when it comes to love and relationships? If you do, then...

20 signs He’s Not Shy ,He’s Just Not Interested In you

You might think your crush is just really shy because he still hasn't asked you out on a date in, like, weeks. But are...

TAURUS The first sign on the ‘making you crazy list’ is definitely Taurus. They are so terribly stubborn that it hurts—it hurts you and it...

The One Thing No One Should Underestimate About You, According To Your Zodiac Sign

Sometimes people judge us by how we look or how we sound. They think they have sized you up appropriately and no matter what we do,...