Like many women out there, I too admit that I’ve been guilty of constantly falling for the wrong guys. I always had this kind of imaginary list of qualities that my partner should have, and every single time I met someone who had everything from the list, I would end up being disappointed.

I couldn’t understand why this “curse” became a big, endless repeat, and I didn’t know how to stop it. It is really frustrating to think that you’ve met the one every time you meet someone who has the qualities you’ve been looking for so long.

But, then things changed. Things DRASTICALLY changed (changed to the positive, of course) when I met my current boyfriend.

And the biggest irony of all is that he’s the total opposite of any of my previous partners.

This made me realize that those qualities I was looking for are actually one big bullshit because my current boyfriend lacks all of them, and I’ve never been happier in my life!

Yup. This made me realize that I don’t really want any of these qualities in my partner.

I just thought I wanted and needed them, but my current boyfriend showed me that they are neither important or essential to establishing a happy and successful relationship!

I mean, who doesn’t like to be around people who are spontaneous? It’s in our human nature to want to have fun and do crazy things with someone who is the embodiment of spontaneity (especially if we are lacking it).

But, I’ve realized that being (overly) spontaneous has its bad sides as well, and I’m glad that my current partner in a way lacks it.

It’s one thing to live life as you please, and it’s completely another to be spontaneously irresponsible, and live life like there’s no tomorrow.

And I’ve realized that there’s a really thin line between the two. Most of my spontaneous partners turned out to be irresponsible and fucked up which influenced the entire course of our relationship as well.

2. Someone who’s the life of the party

Similarly to the previous one, I used to choose my partners in accordance with how inviting and fun they were to be around.

I always fell for those guys who were the life of the party, who were insatiable regarding drinking, dancing, and making a fool out of themselves.

But, now I realize that this was totally wrong, and I know why perfectly well.

It’s because guys who are the life of the party are thirsty for attention (aka attention whores), and it can be really stressful and sometimes unbearable to deal with them in certain situations.

3. Someone who wants to please me in every way possible

No, I don’t mean anything s*xual, but it could refer to that, too.

What I mean is I don’t want someone who wants to please me mentally in every way possible.

I don’t want someone who is afraid to contradict me when needed and to say what they really mean.

Unfortunately, I’ve realized it too late, but better late than never, right?

4. Someone with problems that need fixing

Oh, lord. I can’t emphasize how mad I am at myself for this one. I always tended to fall for bad boys who need fixing.

I guess it’s in my nature to feel sorry for them and want to help them at any cost (and each one cost me a lot of time and nerves as well).

I always felt good when I was able to help them and show them a different perspective of life, but I didn’t understand that by doing it, I was hurting myself.

Instead of enjoying myself with a partner who has his shit together, I wasted my time trying to fix broken souls and imagining that I have some special powers which will heal them and make the world a better place.

5. Someone whose biggest priority is our relationship

Yup. I was always afraid that my partner would neglect me and our relationship, so I was literally obsessed with being with someone whose biggest priority was our relationship.

I can’t even describe how happy I am now with my current boyfriend because he understands the need to spend some time alone.

This is really one of the most important things in every relationship.

We should all have some time for ourselves to recharge and spend time with our friends and family. Solely focusing on the relationship is totally unhealthy and doomed.

6. Someone who’s heavy on the compliments

I bet there isn’t any woman out there who doesn’t like to receive compliments.

We all love to hear that our hair looks good, that our outfit and body are hot, and we always fall for that one guy who knows how to give perfect compliments.

But, by doing that, we forget about our personality as well! By being blinded by these “trivial” compliments, we forget to think about more important ones regarding our souls.

And I can’t even explain you how grateful I am for finally being with someone who doesn’t only focus on my looks. It’s really refreshing and motivating!

7. Someone who’s just there to provide me with an escape

We’re back to the bad boys again. All this time, I only wanted to be with someone who was just there to provide me with an escape.

I always fell for bad boys who did crazy shit that boosted their adrenaline, and this made me feel so alive.

I thought I was living in the moment, only to realize that I was actually missing so much instead.

With my current boyfriend, I’ve learned that living in the moment means being present physically and mentally, without any of that crazy shit and the need to prove yourself something that is not true.

I’ve realized that I don’t need any of these. Real relationships are about being there for each other and focusing on the good things instead of solely providing an escape to each other. And, believe me, I’ve never been happier in my life! 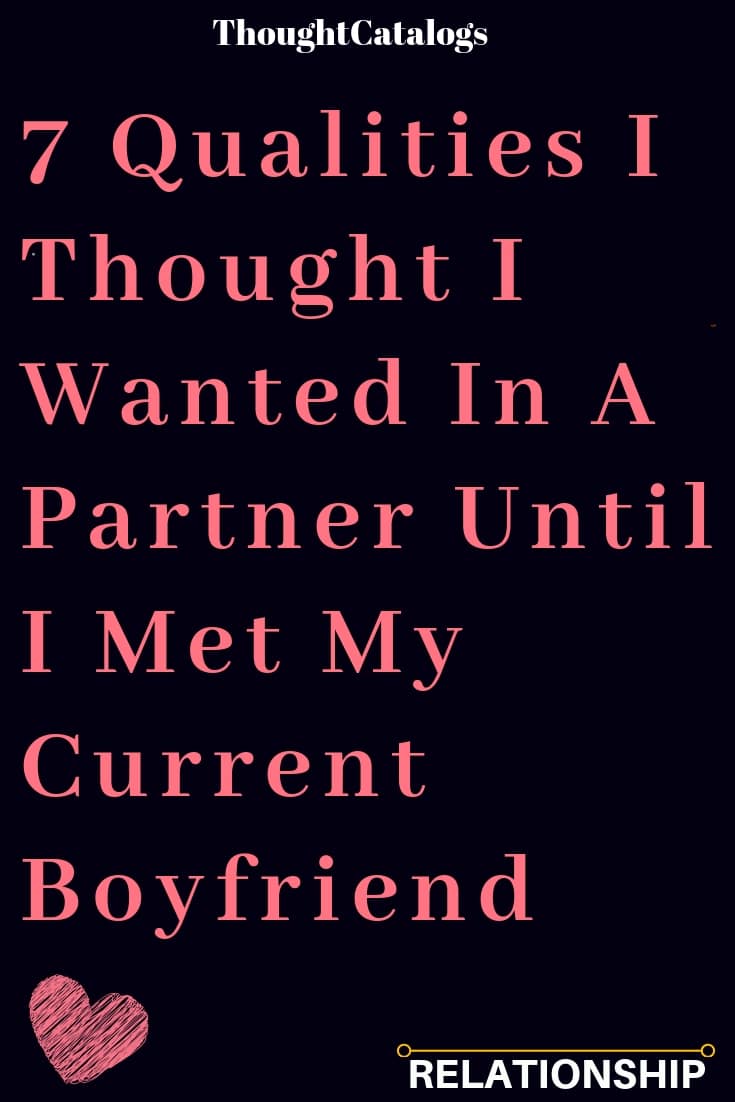 8 Top Reasons Why Relationships Fail (And How To Avoid Them)

7 Signs Your Almost Relationship Is Finally Starting To Get Serious