When someone is in a toxic or abusive relationship, the first question that goes through everyone’s mind is why they don’t just leave.

After all, who in their right mind would consciously choose to remain in an unhealthy relationship which keeps on breaking their heart and destroying their life?

Well, the fact is that things aren’t as simple as they appear at first because toxic people have a way of dragging their victims back to an endless circle of emotional violence and toxicity.

They use different manipulation strategies to leave you always wanting more and here are the most common ones.

The main reason why you keep going back to a toxic guy is his inconsistency. You see, this type of person rarely shows their true colors from the very start.

Instead, they usually pretend to be something they’re not until you fall in love with them. And the same goes for this guy.

There are days when he is the best man in the world.

Days when he keeps on reminding you what butterflies feel like and days when you feel like the happiest woman in the world just by having him next to you.

However, there are also moments in which he turns into a monster and moments when you can’t recognize him.

And sadly, the situations in which his toxicity comes out to the surface happen more and more often.

So, he always leaves you coming back for more simply because you hope to get the man from the beginning of the story back.

You keep lying to yourself that his evil side is just a phase and you keep expecting the nice guy to reappear.

2. He convinces you that you’re not enough

Another strategy toxic men use to keep their victims wanting more is telling them that they’re not enough.

This guy managed to convince you that you have no worth and that nothing you ever do is right.

So subconsciously, you keep on going back to him and attempting to prove him wrong.

You want him to see your true worth and for him to stop considering you as immature and good for nothing.

Without being aware of it, you’re actually in the constant search of his approval, which you’ll never get.

You want him to realize that you’re enough because you think that is the only way in which you’ll regain a sense of your own self-worth.

3. He makes you think you’re unlovable

A toxic man won’t only convince you that you’re not enough—he will also make you believe that you’re unlovable.

He will persuade you that he is the only guy who could ever be with you and that all other men out there would only use your body and throw you away after they’re done with you.

So after a while, you are thankful for him agreeing to be with you.

You think yourself lucky to have him, despite all the awful treatment he’s putting you through.

Also, you don’t even think of replacing him with someone else because you think no other man could ever love you.

Even when you try finding someone else, you doubt his intentions and you constantly hear this guy’s warning voice in the back of your head, telling you that you’ll end up ridiculed and heartbroken.

And this is exactly what he wants—to keep you by his side and to have you always going back to him.

4. He isolates you from the rest of the world

All toxic men have one thing in common: they do their best to isolate their victims from their loved ones.

All of a sudden, your friends are not good for you and even your family members don’t mean you well.

At first, you think that this guy is trying to protect you from evil people in your life, without being aware that he is the bad guy in the picture.

You fail to notice that he is actually doing all of this to keep you away from everyone who could open your eyes and reveal to you the truth about him.

Besides, by making you cut ties with everyone around you, he is also making it harder for you to leave him.

This way, even when you think about walking away, you remember that you have nowhere to go.

5. He’s made you dependent on him

One of the most important things for toxic people is to make their victims dependent on them.

It doesn’t matter whether you’re struggling with financial or emotional dependency—the point is the same; it is a toxic man’s way of caging you.

After he devalues you, you think that he is way better than you.

You believe him when he tells you that you’re incapable of achieving anything without him and that you couldn’t go through life without his hand to guide you.

So, even when you try walking away from this relationship, you keep on going back because you’re scared that you won’t make it on your own.

This guy is your comfort zone and you’re too afraid to step out of it. 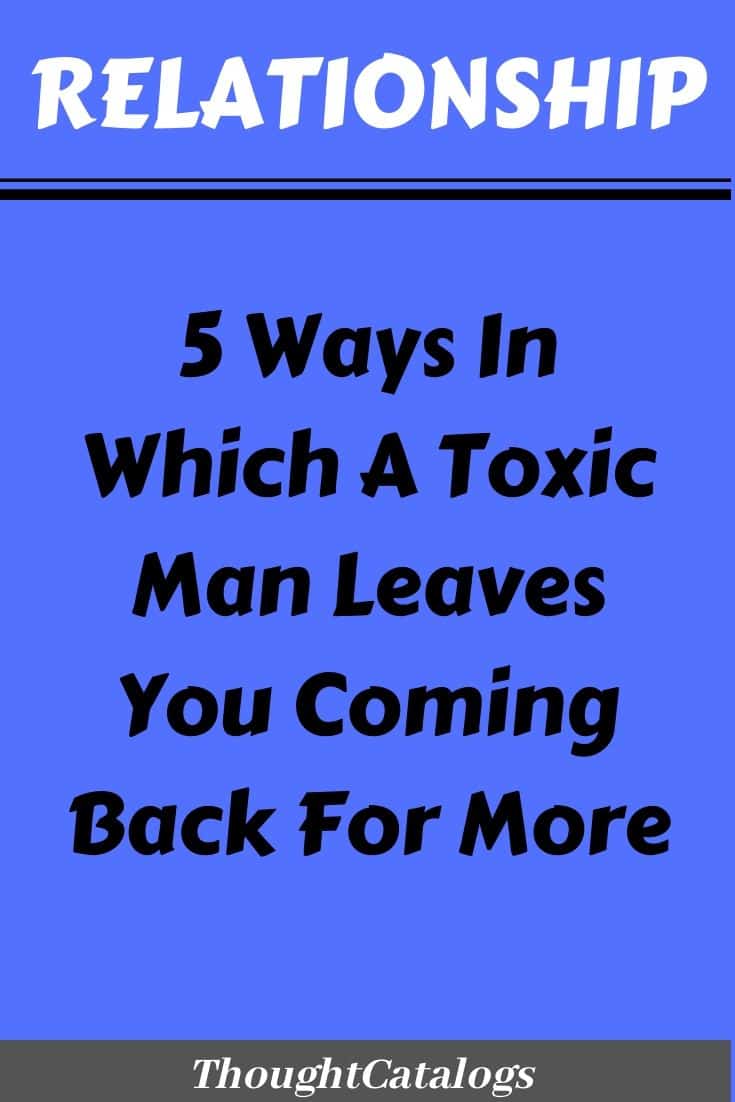 This 5 Signs Will Be A Greatest Loves In 2023, According To Zodiac Sign
7 hours ago

These Zodiac Signs Whose Love Life Will Be Affected This 2023 Year, Based On Your Zodiac Sign
7 hours ago