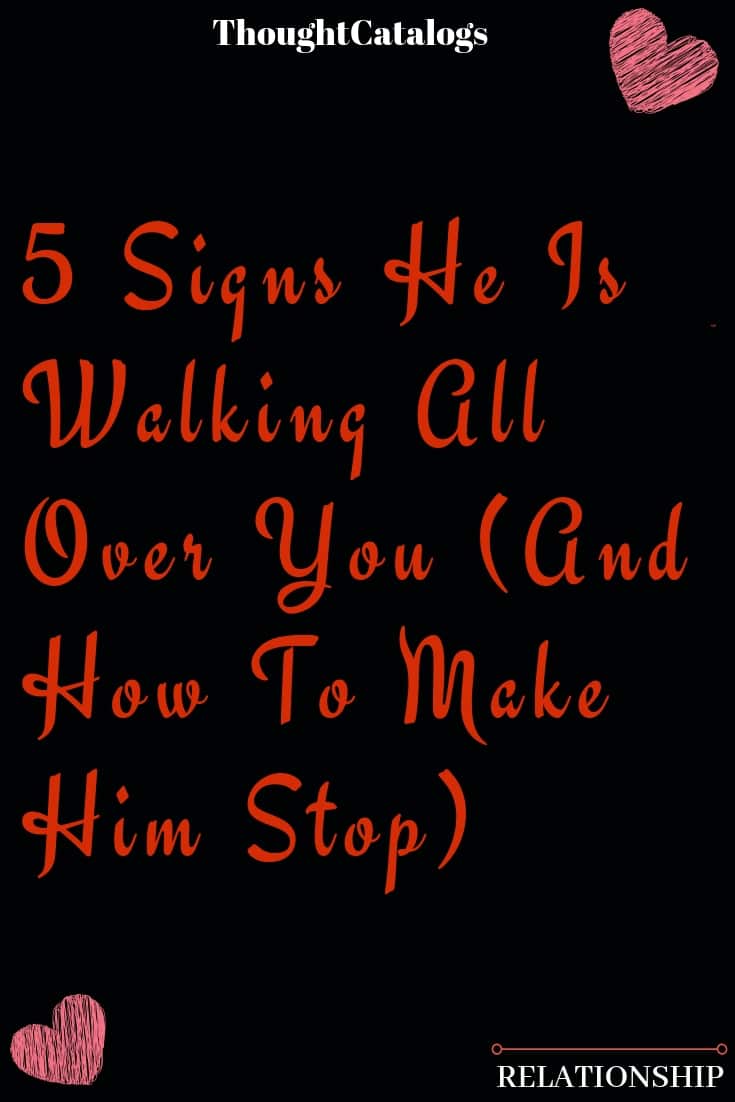 Do you feel like you always get the shorter end of the stick when it comes to love and relationships? If you do, then it’s high time you turn things around.

‘Love is blind’ literally which is why most of us allow things to get too far. We allow our significant others to treat us like doormats, like we are there to be at their convenience.

Because our feelings are so strong, we allow people we love to exploit our good natures, and sometimes we are not even aware of what’s happening.

No matter how you feel, if you worked the whole week and want to chill on weekends, if you have a headache or you are just not in the mood to do something or go somewhere, you will because he asked you to.

Deep down, you feel like you are going to lose him if you don’t do something he wants. You are being too compliant.

#The first thing you should stop doing is being too compliant.

You don’t have to say ‘yes’ to everything your partner says. It just puts you in a subordinate position, when in fact, you should be equals in every aspect of your relationship.

#Stop doing things you don’t like just to please him.

Compromise is OK, but it should go both ways. If he never makes an effort to do things that interest you, it’s high time to learn to say ‘NO’.

It sends the message that you have nothing better to do but wait for him. So, next time he calls you out of the blue at 10pm and asks if you can grab a drink, say, “Sorry, I am busy. You should have called sooner”. Respect your time. And make him respect it too.

2. He takes you for granted

He cancels plans more than he shows up. He takes hours or days to text you back or get in touch.

He has the habit of being rude. He is always right and you are always the one to blame. He belittles you. And you allow him to do so. No matter what, you will be there, no questions asked.

#Don’t be afraid to lose him; make him fear losing you

He can see your fear, and it gives him power over you. He thinks he can do anything he wants, and you will stay there.

If you show him you are more than capable of living without him and have no fear of losing him, the best odds are he will make an effort, give his best and stay.

If he doesn’t, then you are better off, and don’t you doubt it for a second.

3. You are giving him boyfriend benefits even if he is not your boyfriend

You still haven’t had “the talk”, so you have no clue if you are exclusive or not. But you are ready for anything and everything for him. He is giving you crumbs while you are all in.

He says that labels don’t matter and that you should let it be. But chances are he is just stringing you along.

#Nothing will change if you don’t change your ways

It’s time to stand up for yourself, and stop being a doormat in your relationships. You shouldn’t be selfish either, but you should expect the goodness, love, and respect you give to be reciprocated.

You have to demand the respect you deserve. You have to love yourself to be loved back.

If you are letting things pass just to avoid fighting, you will just make things worse. You care so much for him, and you don’t want conflict.

He belittles you, calls you names, doesn’t do what he said he would or anything else that’s making you feel bad, and you keep silent because you think it’s a one-time thing. You think it will pass, but it doesn’t. It only repeats itself, and it gets worse.

#Don’t be afraid of confrontation

Sometimes you just have to stand up for yourself. Fighting is a normal part of every relationship, and it’s good for getting him to see your viewpoint and changing things that bother either of you.

#Be open about your feelings

Don’t keep them bottled up inside. It just hurts you both physically and mentally. Speak your mind; he can’t read your thoughts. You will get that freeing sensation when you put it all out in the open.

5. You allow the disrespect

If you allow everything to happen without your guidance, he will take advantage. Even if he doesn’t want to, it’s incorporated deep down in human nature, and most of the time, it prevails.

He disrespects you, and it doesn’t always have to be with words. In most cases. it’s done with actions. He says he can’t go out with you, but you see he went out with his friends instead. He says he’ll call but he doesn’t. He forgets your birthday, etc.

#Take things into your own hands

Do your thing, focus on your goals, and sit back and observe how he suddenly arranges his time to fit your schedule. How he makes compromises and finds ways to make you happy.

The way in which he will treat you is the way you teach him to treat you.

Remember: if feelings, efforts, and investments put into a relationship are not reciprocated, you are in the wrong relationship.

This Is The Kind Of Guy You Should Wait For, Based On Your Zodiac Sign

The Most Incredible Women Tend To Have The Worst Dating Lives

Save Your Efforts For Someone Who’ll Appreciate Them

Here’s The Ultimate Approach To Win Her Heart, A/c To Her Zodiac Sign

I Choose You Even When You Are Not An Option

He Was Your Lesson, Not A Life Sentence—leave Him In The Past

ThoughtCatalogs - June 3, 2019 0
Relationship anxiety is a serious condition and it needs to be taken that way. It is something that influences your emotional and mental health as well...