It is perfectly okay if you’re feeling unsure about marriage or even know that you don’t want to share your life with another person.

Also, there’s nothing wrong with you if you dream of waking up next to the same man for the rest of your days.

However, it is one thing if marriage is something you want and you find a suitable person.

It’s completely different if it becomes your obsession and the only thing you think about whenever you date someone new.

Times have changed and today, there are hundreds of reasons why you actually shouldn’t date to marry. Here are the most important ones.

When you think about your dream man, you have an exact picture of how this guy should behave, how he should treat you, how he should look – you have every little detail about him all planned out.

However, how can you be sure that this imaginary man is the one for you, unless you try something and someone else first?

Even though dating can be painful and tiring, it is in fact a valuable experience that can teach you some important life lessons, especially those connected to romantic relationships.

When you date more than one wrong guy, it helps you see what you don’t want from a man and  realize what qualities you are looking for.

Yes, breakups and relationships doomed to fail are tough.

Being dumped or being trapped in a toxic relationship is something all of us want to avoid, but you keep forgetting that even the worst experiences can teach us a lot.

All of it builds you as a person and helps you become the woman you’re destined to be. It helps you see how much you can take and learn a lot about yourself.

However, if you don’t date the men you know you wouldn’t marry from the start, you miss out on all of this.

You deprive yourself of the opportunity to fail – and it’s a well known fact that you can’t expect to succeed unless you fail a few times first.

2. You’ll appear as too desperate

Despite your final goal being finding husband material, you probably don’t go around telling your plans to every man you run into.

I suppose you don’t surprise a guy on your first date with the marriage talk.

However, that doesn’t mean that you’re not giving some subconscious signals that this is the only thing on your mind.

Besides, the fact is that men have a way of noticing when a woman has a goal of tying them down, which in most cases, makes them run for their lives.

Don’t get me wrong – I’m not telling you to allow any guy to lead you on for ages just because you don’t want to appear as overly desperate to get married.

However, if a man senses your vibe and sees that you’re obsessed with entering a serious relationship that would eventually end up in marriage, he’ll feel like you’re trying to trap him and run away before you have the chance to limit his freedom.

Whether you like to hear it or not, most men love spontaneous girls who don’t give out the impression that they have every second of the rest of their lives all planned out.

And if you’re obsessed with tying the knot, in his eyes, you’ll be everything but that.

In fact, he’ll immediately perceive you as a woman too weak to go through life on her own and ready to settle for everything he has to offer – even if it’s less than she deserves – just to finally have a husband.

3. It brings you too much stress

Another reason why you shouldn’t only date to marry is your mental health.

If this is the only thing on your mind, every date you go on and every potential relationship you get yourself involved in is a source of stress, instead of it being something you’ll enjoy.

Will it fail? Or will it work out this time?

What would my life look like next to this man? Is he someone I can picture as a potential father of my children?

These and numerous other questions start going through your mind every time you meet a guy you like.

So, instead of being relaxed, your anxiety kicks in and ruins the experience of meeting someone new for you.

Instead of living in the present, you overthink your potential future, which is the last thing you should be doing. 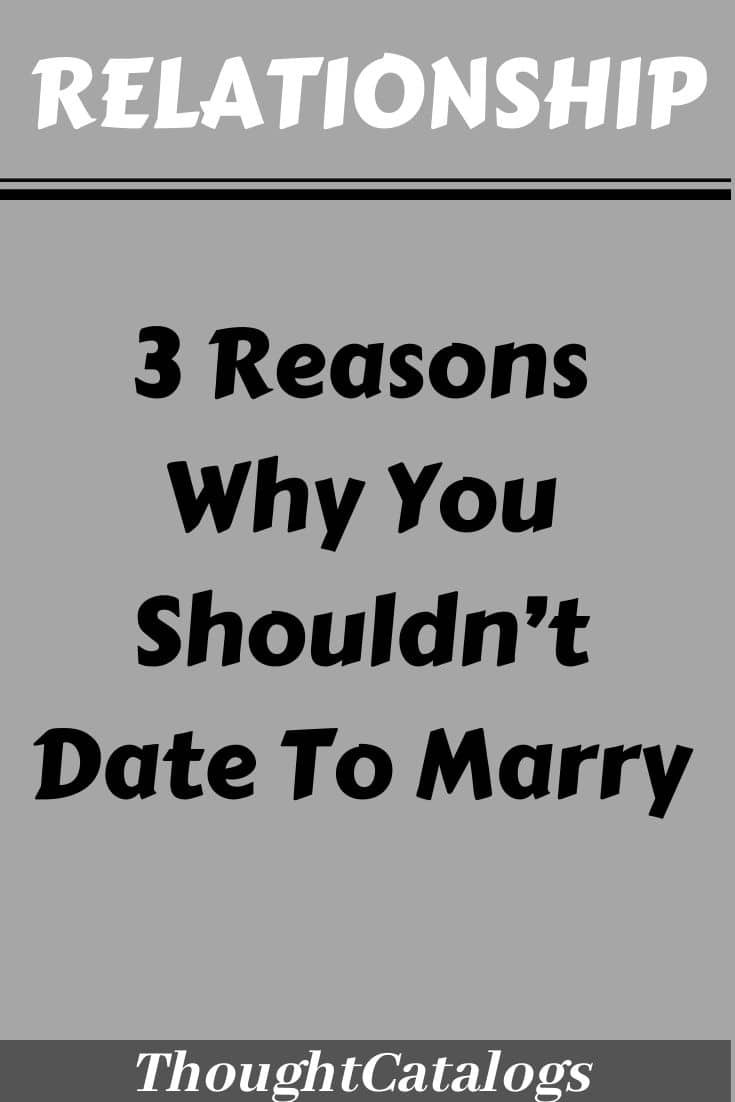 5 Signs You Have That ‘grown-up’ Type Of Love

5 Things You Got When You Lost Him