If you observe people through the Myers-Briggs Type Indicator (MBTI), you’ll see that everyone belongs to one of sixteen different personality types. Each of these types behaves differently in a relationship and knowing your partner’s personality type can make your life much easier.

I am sure that now you are wondering how you can determine your partner’s personality type.

They are outgoing, practical, realistic, committed and devoted? They live in a world of facts and often seem out of touch with their emotions? Well, they definitely belong to an ESTJ personality type and here is everything you need to know about being in a romantic relationship with them.

People who belong to an ESTJ personality type are known to be social and friendly and as people who will always show you a good time. At the same time, they like to be in control of a situation and they are born leaders. Knowing all of this, it is natural for them not to be scared of making the first move.

In fact, they enjoy taking the first step. They are self-confident and believe in their power of attracting the opposite sex. So, if an ESTJ likes you, they will have no trouble telling you that or asking you out straightforwardly.

2. They know what they want

ESTJs always know what they want and are never afraid to get it. The same way they will approach you when you two first meet, they will also tell you all of their expectations at the start of a relationship.

You might think that they are too picky or that they have strong deal-breakers but the truth is that people of this type value their time and they don’t plan on wasting lots of energy on something that won’t work.

This type will rarely enjoy mind games or mixed signals. They don’t want to be in a one-sided or almost relationship. Instead, they are all or nothing kind of people and they want to know where they stand from the start.

3. They are committed and loyal

One of the best relationship qualities of an ESTJ partner is the fact that they are able to commit and to be completely loyal and faithful to their partner (this goes for both women and men). And not only that—a high level of commitment is actually something they crave.

These people don’t have any trouble labeling things, being in a serious, long-term relationship or spending time with their partner. When they get involved with someone, they will dedicate everything to this one person and they will put a tremendous amount of effort into making this relationship work.

Modern dating is something most ESTJs don’t enjoy much. This personality type is known to be traditional and sometimes even old-fashioned. They are old souls; men are true gentlemen and women are ladies who enjoy being courted.

ESTJs rarely enjoy having one-night stand types of relationships and they almost never pursue meaningless flings or only sexual affairs.

They take sex seriously and are not likely to sleep with someone they don’t have any particular feelings for.

Being traditional, it is expected for this type to be family-oriented as well. For them, family always comes first, no matter what, and they always take this seriously. Their family members are the most important people in their life.

They believe in marriage as a holy union between two people and which should last a lifetime. People belonging to an ESTJ personality type usually want to become parents one day.

When they do get children of their own, they are very devoted and loving parents. But at the same time, they are very strict and righteous. They are authoritative and demand respect from their family members and especially from their kids.

6. They protect and care for their partner

ESTJs are natural protectors. They always have the urge to protect their family, friends and especially their romantic partner. And this is the case with both male and female members of this personality type.

As it was already stated, these people tend to have high self-confidence. That means that they don’t have trouble believing in themselves but they also believe in their partner as well. They enjoy taking care of them and pushing them forward.

These people are always in search of some kind of improvement and they inspire you to do the same. If you enter into a relationship with an ESTJ, they’ll do their best to shake you up, so you can become the best possible version of yourself.

Another quality characteristic for most ESTJs is their stability. These people are known to be trustworthy and reliable in romantic relationships.

If you happen to find a partner belonging to the ESTJ relationship type, you can be sure that you can always count on them, no matter what. You can be certain that they will not back out on you when things get rough and that they won’t leave you hanging when you need them the most.

Instead, this person will probably have your back through thick and thin and you’ll feel like you could rely on them with your life.

8. They are brutally honest

An ESTJ will rarely lie to you. Instead, this personality type will always be brutally honest, no matter how harsh the truth is and without thinking about their partner’s feelings while telling them what’s on their mind. They will always tell you how things really are and even though this might insult you at first, you’ll learn to appreciate this quality of theirs with time.

9. They are good with money

Even though this is something you probably don’t pay much attention to at the beginning of a relationship, your romantic partner’s ability to handle money is of crucial importance for your future. And this is something ESTJs are great at because they always have a radial approach to money.

I am not trying to claim that all of the ESTJs are rich. I am just saying that they don’t spend unnecessary money they actually don’t have and that they don’t like being in debt.

Some might accuse them of being materialistic or even cheap but the truth is that ESTJs are just born with a PhD in economy. They just know how to save and handle money and most importantly, they know how to earn it.

10. They don’t change over time

Definitely not the least important quality of an ESTJ personality type is the fact that they don’t change after the honeymoon phase is over. They don’t show you some other side of them once you fall for them because nothing is hidden when it comes to this personality type.

What you see right away is what you get with ESTJs. They will rarely pretend to be someone they are not just to get something from you and they will never hide their flaws. Instead, these people show you their true self right away and you have the option of choosing whether you can handle someone like this or not.

11. They like to be controlling and think they are always right

One of the first negative sides that you’ll notice after getting yourself involved with an ESTJ personality type is their controlling side and how they want everything to go their way, while disregarding everyone else’s points of view. This is the type who likes to keep matters in their own hands and the type who enjoys being in charge.

Although this can be great when you need someone to lead you, it can also be exhausting and tiring.

Due to their high self-confidence, ESTJs think that they are always right and will rarely admit their mistakes. They won’t avoid fights or disagreements. Instead, they are ready to continue with an argument until you admit that they were right all along.

ESTJs put a lot of effort into a relationship. They will give you their entire self but they will also look for a lot in return. Some might think of them as too demanding or challenging to be around but the truth is that they just ask as much as they are willing to give.

Things are actually pretty simple—when they commit to you, they want the same treatment in return. When they prioritize you, they won’t settle for you putting them last. And when they love you with all of their heart, they expect nothing less than for you to love them back. They will give you the same amount of effort as you give them.

13. They have a hard time expressing their emotions

Contrary to popular belief, ESTJs usually have a hard time expressing their emotions, especially when it comes to saying them out loud. Yes, they are known as good speakers but they don’t like talking about their deepest feelings much.

Don’t expect an ESTJ to be romantic or to make some big gestures proving their love for you. But that doesn’t mean they are insensitive because they will show you how they feel about you through other things—through their attention and devotion. When an ESTJ loves someone, they act on it, instead of talking about it.

14. They move on quickly after a relationship ends

ESTJs usually don’t have trouble getting over someone, no matter how much they loved them. This personality type is known to move on quickly after a relationship ends. So, if you’ve done some harm to an ESTJ, don’t expect them to beg you to take them back or to spend years crying over you.

This is because they know their worth very well and they aren’t ready to stay around someone who doesn’t appreciate them. Besides, when they walk away from a relationship, they know that they did their best to make it work and that is why they have a clear conscience which helps them move on completely.

When you first meet an ESTJ, you assume that they are an open person who will let you in, without any trouble. But as outgoing and friendly as they really are, they actually have a hard time openly communicating about their deepest emotions.

The truth is that this personality type is hard to get to know and this makes their partner feel like they are left out. But as soon as an ESTJ sees that you are trustworthy, they will let you in and when that happens, you can consider yourself pretty damn special. 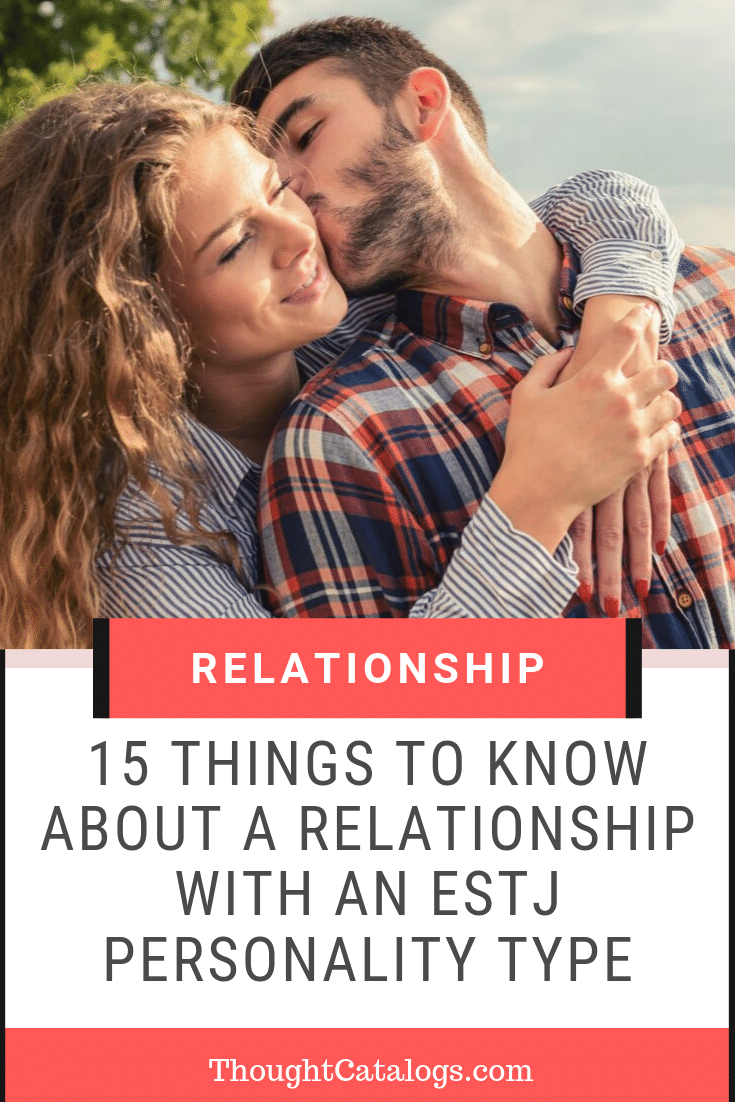