1. When I gave her a second chance and she blew it

Forgiving your spouse for cheating isn’t an easy task, regardless of whether you are a man or a woman. But forgiving it and getting played all over again is even harder. My wife cheated on me with our mutual friend. She swore it was a one-time thing, that it would never happen again, she just felt lonely and all the usual excuses.

I decided to put my pride aside and give her one more chance, partly for our kid’s sake and partly because I loved her in spite of the betrayal. But the moment I found out that it wasn’t a one-time thing and that she was still seeing him, that was what pushed me to file for divorce.

2. When her jealousy turned pathological

She was always a bit jealous and at first, I found it cute. I don’t see anything wrong with jealousy, as long as it’s within the limits of what’s considered normal. But my wife took it too far. She watched my every move and questioned my every word. She basically played detective instead of being my wife.

She had a lot of public outbursts of jealousy. She would pick a fight every time a woman would cross paths with me. She would embarrass me in front of complete strangers and in front of my friends. But the moment that I saw her jealousy was a medical case study was one night when I had to work late. She burst into my office and physically attacked one of my female colleagues. I was shocked, humiliated and felt sorry for my colleague. That was the moment in which I saw divorce as the best thing I could do for both of us and the people around us.

3. When she physically attacked me in front of my family

As a man, I feel embarrassed to admit this out loud but my wife was an abuser. It all started with emotional abuse, manipulation, playing the victim and blame games. To tell you the truth, I wasn’t even aware of it, as I always blamed myself and tried to be better, do better and give her as much as I could.

Divorce never crossed my mind before, it wasn’t something I planned. I kept on thinking that things would get better. Unfortunately, they only got worse. The emotional abuse turned into physical in a split second.

One night at a family gathering at my parents’ place, she lost it. I made a joke and it didn’t sit well with her. She just lost it and threw her full plate right at me. She started screaming and hitting me and that’s when I knew that divorce was the only option.

4. When my friend showed me the texts she had sent him

My wife was a bit flirty and it bothered me but with time I started seeing it as a part of her nature and I accepted it. I trusted that she was just playing with words and that there was nothing more to it. What opened my eyes were her texts directed at my friend. She openly wrote that she wanted to have sex with him.

I browsed through her phone and saw that she still had a Tinder app. I opened the app and discovered that she was still actively dating and that I was apparently the only one she didn’t want to have sex with. I think that just about sums it up.

6. When I saw our son crying and begging us to stop fighting

We got to a point in our marriage where I couldn’t remember us having a normal conversation. It was all yelling and shouting. Something that was far from normal became normal because I got used to it. It was the moment when I saw our son crying and begging us to stop fighting that I knew we had to end it for good. It was not just that we were unhappy in our marriage, it was that we were making our child unhappy by staying together.

7. When her lover’s wife came knocking on my door

It was early morning and I was just on my way to work. I heard the doorbell and answered. I saw an unknown woman standing in front of my door. She introduced herself and said, “I just want to let you know that your wife is sleeping with my husband.” I lawyered up immediately and took the whole thing to court.

8. When she said that she never loved me, she just settled

Our relationship was great but once we got married, it was a whole other thing. Something was just missing. Later on, I found out that that something was love. She admitted that she never truly loved me, she just settled for me because I was a good guy who treated her well. There was no point for me to stay in something one-sided. I would have done anything for her but I couldn’t love for the both of us and that’s why divorce was inevitable.

9. When I walked in on her having sex with another man

I really thought this kind of scenario only happened in movies or to other people but that it definitely could never happen to me. I came home earlier than I was supposed to and saw my wife fucking our next door neighbor. I broke his nose, lawyered up and dragged her ass through court. Fortunately, we didn’t have children so it was a clean divorce, with me getting the better end of the deal.

10. When having time apart felt better than being together

We separated for a while. We figured since we couldn’t be together, maybe some time apart would do us good. And it did. It made us both realize that we were better off on our own and that we were just making each other miserable when we were together.

11. When she said that I was her man so I had to provide for her

She was never the type of woman who liked to work, she did it out of necessity. When we got married she kept on working for the first year. One day she decided she didn’t want to work anymore and that I was the one who had to provide for her. Her statement made me realize just how selfish she was. I would have understood if she couldn’t work for some reason but what I couldn’t process was her putting all the burden on me, knowing that we were already having a hard time as it was.

12. When our fighting became so severe that the police had to intervene

Calling each other names. Breaking dishes. Tossing furniture. Yelling. Screaming. Our neighbors couldn’t take it anymore so they called the police. And it was the moment when two police officers showed up at my front door that I realized I was living in my worst nightmare and that it was time to wake up.

13. When I realized she was an addict

I don’t know whether I hadn’t seen that something was off or I refused to see clearly. She always had mood swings. She would yell at me for no apparent reason. She would be so cute and cuddly and in a matter of seconds, she wouldn’t let me touch her. She had trouble sleeping and she would take things that I thought were sleeping pills.

On my way home one day, I stopped to buy her cake as an attempt to cheer her up. I couldn’t believe my eyes when I saw her buying drugs from a local dealer. All of my hopes and dreams about us making it work went down the drain. I thought about sticking around and getting her the help she needed. But she denied everything and didn’t want to discuss it. No matter how much I loved her, I couldn’t have stayed, she would have just pulled me down with her.

14. When I discovered that she was sexting some guy

Call me old-fashioned but I don’t believe that somebody’s wife should be sexting with anybody. It’s rude, disrespectful and it can’t be justified. I already forgave her once for something similar. I wasn’t going to stick around and let her continue to disrespect me like that. I didn’t want to hear all her lame excuses.

15. When she started taking it out on the children

I could have put up with a lot but the breaking point for me was when she started to take her frustrations out on our children. She called them stupid. She told them she regretted marrying me and having them. They were all in tears and I couldn’t say anything to console them. She’d had a lot of episodes like that but this one was over the top. What kind of mother says to their children that she regrets having them? I filed for divorce immediately. Now I have sole custody of my three beautiful children. I am just sorry I didn’t divorce her sooner, as my children would not have been so traumatized if I had. 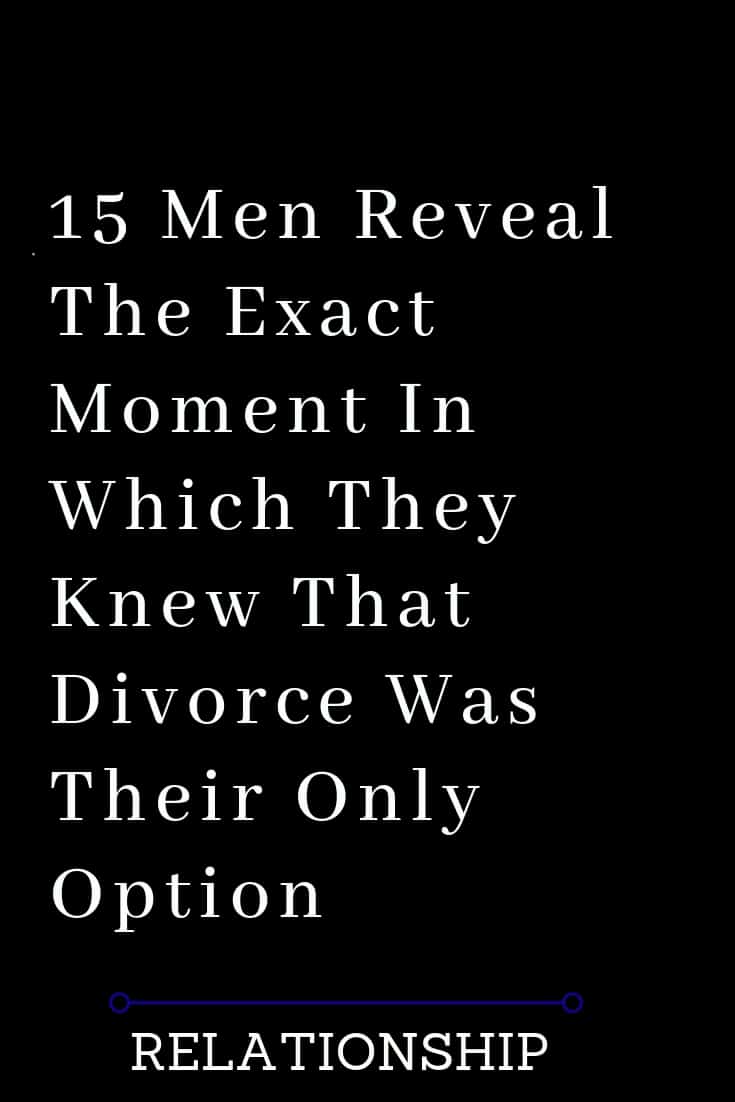 5 Zodiac Signs That Are Most Likely To End Up Alone