1. He never initiates anything

Unlike a true gentleman, he lets you do all the heavy lifting. You have to make an effort while he doesn’t even lift his little finger. You initiate the conversation nine times out of ten. You arrange dates. You plan your weekends. Have you noticed that you are doing a lot and you guys just started? Of course, it’s OK to initiate a conversation and plan things but if you are the only one doing it and he just goes with the flow, he is just playing the field and not so into you. If he was, he would make an effort, he would do his part.

The famous, “I am so freaking busy,” excuses. They probably make you want to roll your eyes every time you hear them but you play along, you let it slide, even though deep down you know nobody is that busy. Look at it from your own perspective—you are never too busy for the people you care about. You make time, no matter how little it may seem, you do your best. That’s why it shouldn’t be a problem for him to make time for you if he cares. If he is, “Super busy,” all the time in the beginning, just imagine how “Busy,” he will be in the future.

3. He avoids meeting you in public

If your encounters have limitations like only at night, in the middle of the night, only his place or yours, only some remote places (where there’s only a small risk of bumping into somebody either of you knows), he is up to no good. There are a few probable scenarios. The first one is that he is only in it for the sex, the second is that you are his backup plan and the last one is that you are a side chick without even knowing it.

4. He ignores all the important things about you

5. He is unwilling to bend a bit to make you happy

He sees no place for compromise and adjustment, he only cares about his well-being. So, he would never go out to lunch with your relatives, stay home when you are feeling down, watch a movie he doesn’t like and so on. Those ‘little big’ things that show that he is willing to do something that is unlike him are the ones that show real affection and emotions and he is lacking them.

6. He avoids meeting your friends

Or introducing you to his for that matter. Meeting friends is important, their opinions count, especially early on in the relationship. They are an integral part of your life. But somehow he skips on the chances to meet your friends, and it never even crosses his mind to introduce you to his. He is not in it for the long haul so he isn’t concerned with you guys making spots in each other’s life.

7. He is trying to change you

He hasn’t even made an effort to get to know you properly but he already sees some faults in your behavior. He stresses the things you should be doing differently and nothing you do ever seems right. He shouldn’t be making you this self-conscious. This is a major red flag of an emotional psychopath you should never ignore. He has no right to do that and him wanting to change you has more to do with him than it has you. When you are in love you don’t see flaws that early on, you only concentrate on the good stuff. On the other hand, he is not perfect either and you are probably looking at him as though he is. If he is making you feel like you have to change right at the beginning, imagine how much worse things will get as the relationship progresses.

8. His behavior is immature

He is playing hot and cold. He gives you all the attention and then he pulls away. One minute he is there and the next he is nowhere to be found. He waits a long time before texting back. He has a wandering eye when other girls are around and he enjoys seeing you jealous. He is not ready for a relationship or any sort of commitment and he isn’t going to change any time soon.

He always makes a mountain out of a molehill. He has this urge to always be right and prove you wrong, like it’s some kind of competition he needs to win. He forgets it’s not the problems, arguments and small fights that matter. It’s never about winning or losing, it’s about the two of you working together to solve some problem or agreeing to disagree. If he puts these petty wins above you, he is not the one for you.

10. It’s still the honeymoon phase of a relationship and you are more sad than happy

These should be your happiest days. This is the time you should be on cloud nine and daydreaming and instead, you spend your days waiting for him to text back, to find the time, and you are worried, upset and sad. You don’t know where you stand with him and it’s driving you crazy. Is this really the honeymoon phase or warning signs telling you to get out?

11. You are not you when you are with him

You say things that are completely out of character. You feel nervous all the time. Suddenly, you pretend to like things that you hate from the bottom of your heart. Relationships inevitably bring change, you want to be better, do better and you are inspired and motivated, but they should never change your essence. When you are with the right man, you are relaxed, comfortable and the best version of yourself and not somebody you yourself don’t recognize.

His ex is very much a part of your relationship. He might not be over her yet so he keeps comparing you with her, bringing her up in random conversations or he’s still in touch with her. Her presence influences your relationship in a negative way and you don’t know if he really is ready to move on. Be careful about this one, and remember you deserve so much more than being somebody’s rebound.

13. You make excuses for his poor behavior this early on

“He doesn’t care much about labels but he cares about me,” or, “He is not into texting so we rarely talk,” or, “He is too busy with work to spend time with me,” or, “He needs more time, that’s all.” And you keep repeating sentences similar to these ones, knowing full well that you are just making excuses. He is not living up to your expectations, he isn’t putting in any effort, he has one foot out of the door, he is not the one for you and you are probably too much in love to see things clearly.

14. He only wants you when it’s all rosy

You can’t always be at your best. You are going to have bad days and that’s inevitable. Life happens, things go badly. But he doesn’t want to be around you when you are sad, upset or tired. He wants to be around you only when everything is rosy and you are smiling. This just tells you that he doesn’t care about your feelings, that he is incapable of empathy or providing comfort. He is not there when you need him the most. He is not the one who will be there through better or worse. He is not your forever person. 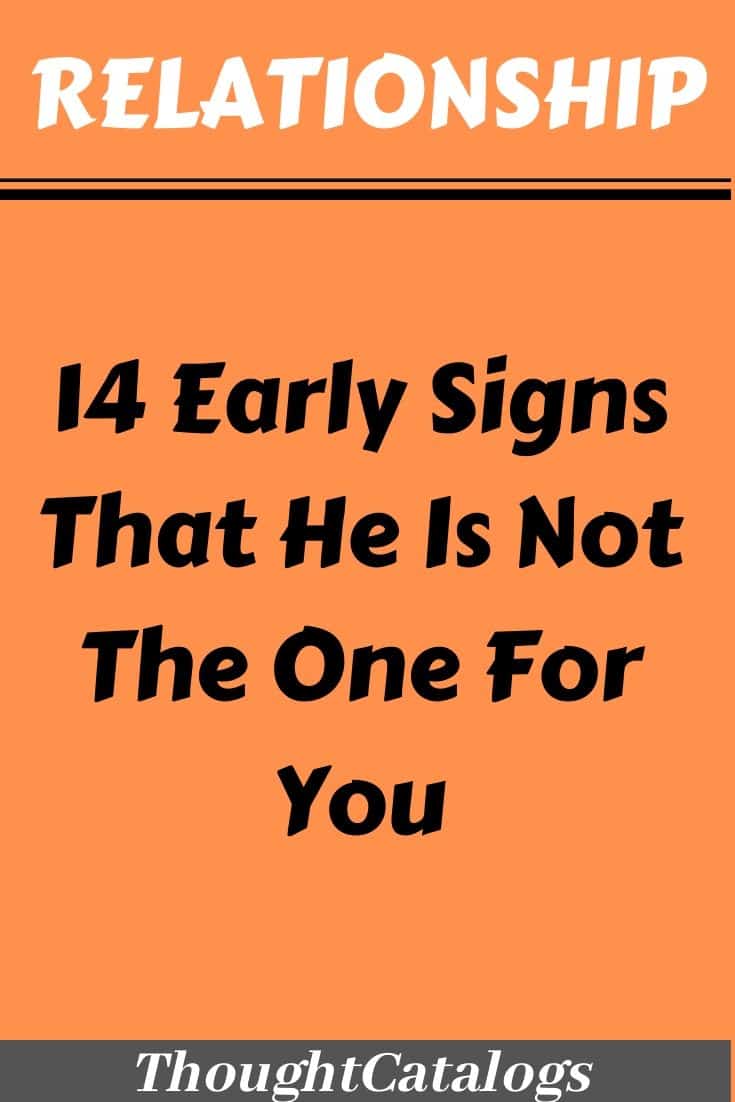 If He Does These 6 Things, He Doesn’t Want To Date You – He Just Wants To Keep You Interested

Check Also
Close
Featured Posts
These Zodiac Signs Ranked From Nicest To Cattiest, Based On Zodiac Sign
8 hours ago

These 3 Zodiacs Who Absolutely Hate Catching Feelings In February & March 2023, Based On Zodiac Sign
8 hours ago

These Zodiac Signs Ranked From Most Psychic To Totally Clueless in 2023, Based On Zodiac Sign
8 hours ago

These 4 Zodiacs Who Will Walk Away If They Catch You In A Lie In 2023, Based On Zodiac
8 hours ago