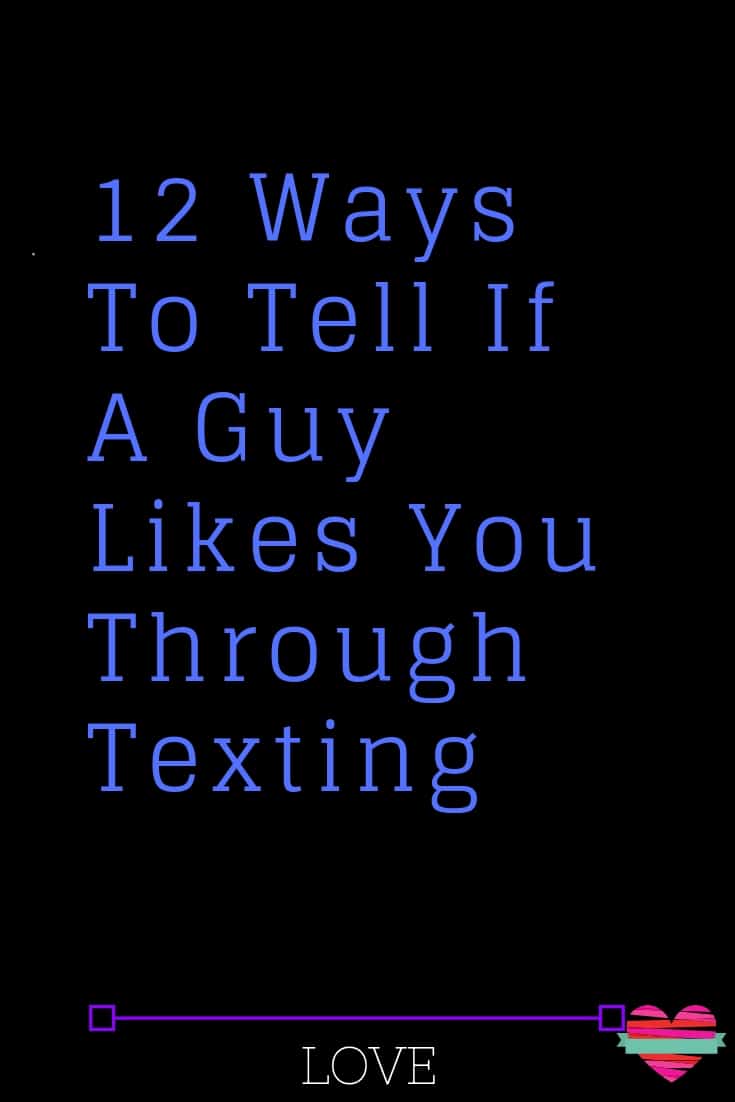 Facebook
Twitter
Pinterest
WhatsApp
Linkedin
ReddIt
Tumblr
Flip
Copy URL
I bet all of you had at least one situation in your life when you wanted to send the perfect text but you didn’t know what to write. In that way, you wanted to let a guy know that you liked him but that you were not an easy girl though. Well, if you think that guys are different from you, you are wrong because they also bother their head about what to write to a girl they like. And believe it or not, if you just pay a little bit of attention to the way he texts you, you can find out whether he likes you or not. So, if you want to know if a guy likes you through texting, read further.

1. He sends you good morning texts

Guys are simple creatures and they won’t have any problem admitting to you that they think of you. If you want to know through texting if he likes you, just pay attention to the time he texts you. If he sends you good morning texts, it is a sign that he likes you. That means that you crossed his mind as soon as he woke up and that you are a special woman in his life.

2. He sends you goodnight texts

If he is the first one who texts you in the morning and the last one who texts you goodnight, it means that he feels something for you and he wants you to know it. He doesn’t mind spending the whole night exchanging sweet texts with you because that is a good way to get to know each other. Also, if he starts sending some flirty emojis somewhere along the road, it is a sign that he not only likes you but that he is crazy attracted to you!

3. He says he would like to be with you

If a guy texts you only to tell you that it would be great to be with you at that moment, you can bet that you are on his mind a lot. He is probably daydreaming about you and he likes you so much that he wants to spend every free moment with you. If he says that he would actually love to see you face-to-face and not just exchange texts with you, it is a sure-fire sign that he has strong feelings for you.

4. He asks you questions

If you want to know if a guy likes you through text, just pay attention to what he writes. Does he ask you any personal questions? Or is he contacting you just because he is bored? If he wants to know more about you, it is a sign that he likes you and that he wants to be with you. Guys never ask questions of girls they don’t like because that would mean wasting time. And that is something they surely don’t want to do.

One great way to find out if he likes you through texts is to see how fast he replies. If he is online non-stop waiting for you to text him, it means that he is super into you and that he enjoys texting you. Also, if he uses social media to send you some funny things, like jokes or funny videos, you can bet that he is hooked on you. Now it is up to you whether you will give him a chance or you will just ignore him.

6. He sends you a text saying that something reminded him of you

If he texts you that a song or someone in the street reminded him of you, it means that he really likes you. It is a sign that he wants to be with you and let you know that what he feels is not a problem for him. It is really hard for men to express their emotions but if he does something like this, you can be positive that he likes you. And he probably can’t wait to be face-to-face with you, to show you how much he is in love with you.

7. He compliments you through texts

If he compliments you on a daily basis through texts, it is a sure-fire sign that he is into you. If he pays attention to how you act, how you dress and how you talk, and if he likes all that, he will surely compliment you. He will try to send some cute love paragraphs so you would feel good after you read them. The thing is that he wants to make you happy and he will find ways to do so.

8. He gives you sweet nicknames

If you want to know if a guy likes you through texting, just pay attention to what he calls you. If he gives you some sweet nicknames when he sends messages to you, it means that he feels comfortable enough with you and that it makes him feel good when you two talk. Maybe he even smiles when he calls you names like that and waits for your reaction, hoping you won’t mind it. But if a guy made the effort to think of a cute name for you, he surely feels something more than friendship for you.

9. He texts throughout the whole day

If your guy texts you not only in the morning and evening but throughout the whole day, it is a sign that he really likes you. He obviously can’t stop thinking of you so he wants to be in contact with you all the time. That can be very sweet if you have time but if you are at work, I don’t think you will like him bombarding you with texts the whole day.

10. You are the first one to find out about any big news

If he texts you as soon as something big happens to him, you can be sure that he likes you more than just a friend. He is obviously thinking about you more than you think and he considers you to be a special person in his life. Just remember who you call or text first when something big and important happens to you and everything will be crystal clear.

What better sign that a guy likes you than a confession? If he sees that you are interested in him, he will feel a bit better and will have more strength to tell you that he likes you. Even if you think this is a piece of cake for guys, they actually spend a lot of time thinking about how they will do it. But once he gets up the courage he needs and says it out loud, you won’t have to wonder what his real feelings are.

If a guy sends long texts, that is a sign that he is interested in you and that he likes you. That only means that he wants to get to know you better and that by writing long texts and asking you questions, he will be able to do so. So, whenever you see that he tells you about his day even if you didn’t ask him anything, you can be positive that he likes you and that he enjoys letting you know about the things that happen to him.

Relationship Dynamics: What They Are And What To Watch Out For

These Are The 6 Zodiac Signs Who Suck At Breaking Up