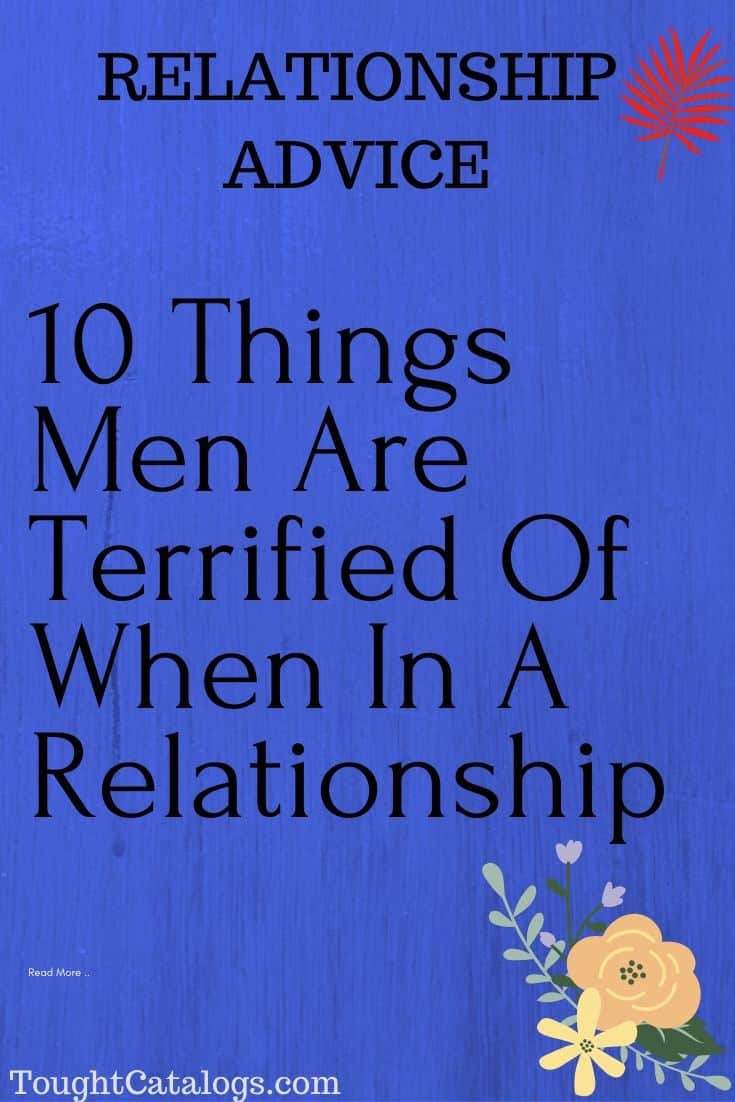 There are some common fears every guy has when it comes to relationships, even though they aren’t always willing to admit them.

Sometimes they’re not even aware of the exact reason they are blocked from moving on further in their relationships, but they can feel there’s something stopping them from committing to one girl.

Take a look at these ten things that scare men so deeply, they might be unwilling to pursue true relationships at all.

Let’s be honest, relationships take a lot of our free time.

Men are afraid that in the process of spending a lot of time with their girlfriends, they will not have enough time to pursue their hobbies and interests.

Day by day, this can result (in their minds) in losing themselves completely. Basically, they are scared that their relationship with a girl will become the biggest part of their personality.

2. Not respecting the bro code

This is a big one. Guys have their reputations to uphold. One of the biggest rules of the bro code states that the guy should choose his friends over girls at any time.

When one particular girl becomes important to them and they actually prefer spending time with her over his buddies, this doesn’t go unnoticed.

His friends will begin calling him out for this, and even though they’re probably only joking and messing with him, he still might be scared of what they actually think of him now.

Some guys are incredibly afraid of commitment. Even those who aren’t in the red zone of commitment fears aren’t completely insensitive to this one.

They are afraid of committing to any girl and getting emotionally attached. This fear connects to the fear of being hurt in the end.

This is the strongest in those men who have been hurt in the past and don’t want to go through the same again.

They prefer having many relationships in which they don’t have the time to get overly connected to the girl, and therefore lower their chances of getting their heartbroken.

This “competition” they are afraid of maybe completely fictional and have nothing to do with reality.

Their jealousy and insecurities might get them to think a girl is choosing others over him, and this scares them – a lot.

5. Moving too slow or too fast

Moving too slow may cause a guy to wonder if he’s good enough. He may start having doubts whether the girl simply doesn’t like him enough to move forward in their relationship.

As for moving too fast, this usually connects to them not being ready to commit or move the relationship to the next level (move in, exchange house keys, marry).

The “where is this relationship going” talk freaks them out and they aren’t ready for it to go anywhere.

Men are afraid of their girlfriends having friends they don’t like. The truth is, each one of us is tied to our friends, sometimes even more than family.

We go to them for advice, start behaving the way they do, and share many interests and behaviors with them.

If he doesn’t like the girl’s friends, he might be afraid that she is a different kind of person then he imagined her to be, or might turn into one of those people he dislikes.

7. Having no common interests

If a girl’s interests are way too different from his, he will immediately imagine having no ways to spend his time with her.

A guy also afraid of getting pushed to pursue her interests instead of his – something no guy wants to do.

Time passes. The relationship that was once great proves itself to be impossible to continue. He gets hurt.

Yup, that’s right, it all basically ties to guys’ fear of being hurt in the end. They hate the thought of investing themselves and their emotions into something that’s going to go to waste.

This one is obvious. They are afraid of meeting the girl’s parents. There’s this pressure to impress the girl’s friends and family, but most importantly parents.

They are scared that they won’t come off great and that the girl’s parents dislike of them will mean the girl will start to find faults in them too.

Ultimately, they are scared of change. Every relationship brings changes to your life, whether you realize it or not.

We’re not talking about girls trying to change guys on purpose, but rather the common course of every relationship.

Some guys hate the thought of their lives being different then what they are. They have their little rituals and the ways they want to go through the day, and changing this doesn’t seem appealing to them.

They need to accept the idea that change is necessary and in fact good for them, and find the girl worth changing their lives for.

It Was Always Him And It Will Always Be Him…

5 Signs You Are Just Convenient For Him

I Am Sorry For Using You To Feel Whole

How To Love A Woman Who Was Never Loved

Scorpio Season Begins: Time To Let The Past Die And Go For A Complete Transformation

The Reason Each Zodiac Sign Has No Idea They’re Beautiful

If You Really Want To Keep Her, Give Her A Reason To Stay

Stay Single Until You Find Someone Who Loves You Through Your...

ThoughtCatalogs - November 21, 2019 0
Stay single until you find someone who understands what you’re going through. Be with the man who knows that every day is a new battle...