Your 2022 Resolutions Based on Your Zodiac Sign, Guaranteed to...

The 3 Zodiac Signs That Make The Best Wives In...

The Toxic Person You Should Distance From In 2022, Based...

What pisses Aries off the most is:

1. People who shuffle when they walk.
2. Unreturned phone calls.
3. Mobile phones and all devices that are broken in general.
4. Animals locked up in cages.
5. People posting personal stuff on social media.
6. People who beat around the bush and hesitate to tell you what they want.
7. Bad dancers.
8. People who fail to dress up to the occasion.
9. Trains, buses, and planes arriving late.
10. Folk music.

What pisses Taurus off the most is:

1. People who brag too much.
2. People who are unorganized and messy.
3. Ripped clothes.
4. Bad chefs.
5. Bad manners in public.
6. Speaking in public.
7. People who don’t wear deodorant.
8. Being laughed at.
9. Feeling that they are not smart or good enough to handle a certain situation.
10. Bad food and a bad ratio of quality to price.

What pisses Gemini off the most is:

1. People who don’t have a sense of humor.
2. If they don’t get the attention they deserve.
3. Broken watches and alarm clocks that don’t wake them up in the morning.
4. Bad liquor.
5. Uncomfortable shoes, especially the ones that prevent them from dancing.
6. People who talk slowly.
7. People who walk slowly.
8. Pessimism.
9. People who are dependent on someone or something.
10. Inability to use technology.

What pisses Cancer off the most is:

1. People who wake them up early or show up earlier than they were supposed to.
2. Wool and other materials that are itchy on the skin.
3. Sleeping on the couch or in a lousy bed.
4. Heat.
5. People who don’t have any fashion sense.
6. People criticizing.
7. Violent movies and violence among people in general.
8. Ungrateful children.
9. Losing sunglasses.
10. People stealing their thunder.

What pisses Leo off the most is:

What pisses Virgo off the most is:

What pisses Libra off the most is:

1. People telling them to turn the music down.
2. People who pretend they are better than they really are.
3. Dog poop in parks and other green areas.
4. Thieves.
5. Animal cruelty.
6. People who don’t care about friendships.
7. One-night stands.
8. Bad haircuts.
9. Addiction of any kind, especially drugs.
10. Inability to talk politely.

What pisses Scorpio off the most is:

1. People who borrow something and never give it back.
2. Passionless lovers.
3. A partner making them jealous.
4. If someone is better at something than they are.
5. People who play with their food.
6. Being at the center of gossip.
7. Being accused of infidelity.
8. People who are too keen on the latest trends.
9. People who claim to have psychic powers or the ability to foretell the future.
10. People who take two parking spots.

What pisses Sagittarius off the most is:

1. People who complain all the time.
2. Any kind of crowded place.
3. Sick co-travelers.
4. Being late.
5. People who are too scared to take a risk.
6. Being accused of handling money poorly.
7. People who expect to be right all the time.
8. Lost baggage.
9. Animal abuse.
10. People who can’t broaden their horizons.

What pisses Capricorn off the most is:

1. People who brag but can’t support it.
2. Borrowing money.
3. People who don’t fulfill their promises.
4. People with no firm attitude.
5. Parents who don’t discipline their children.
6. Leaving the toothpaste cap off.
7. A bad haircut.
8. Men who are obsessed with the way they look.
9. Passive and lazy people.
10. Taking the blame for something they didn’t do.

What pisses Aquarius off the most is:

1. Boring people.
2. Talking about the past.
3. Shrinks.
4. Gossiping and making things up.
5. People who know about things only in theory and not in practice.
6. Lack of loyalty.
7. Dirty hands.
8. A primitive way of thinking.
9. Too big expectations.
10. Ignorance.

What pisses Pisces off the most is:

1. People getting attention by laughing hysterically.
2. People who avoid arguments.
3. Unbearable heat.
4. Alcoholics.
5. Slow drivers.
6. Animal cruelty.
7. Getting involved in other people’s business.
8. Judging others.
9. Being cruel to children.
10. Not caring about the environment 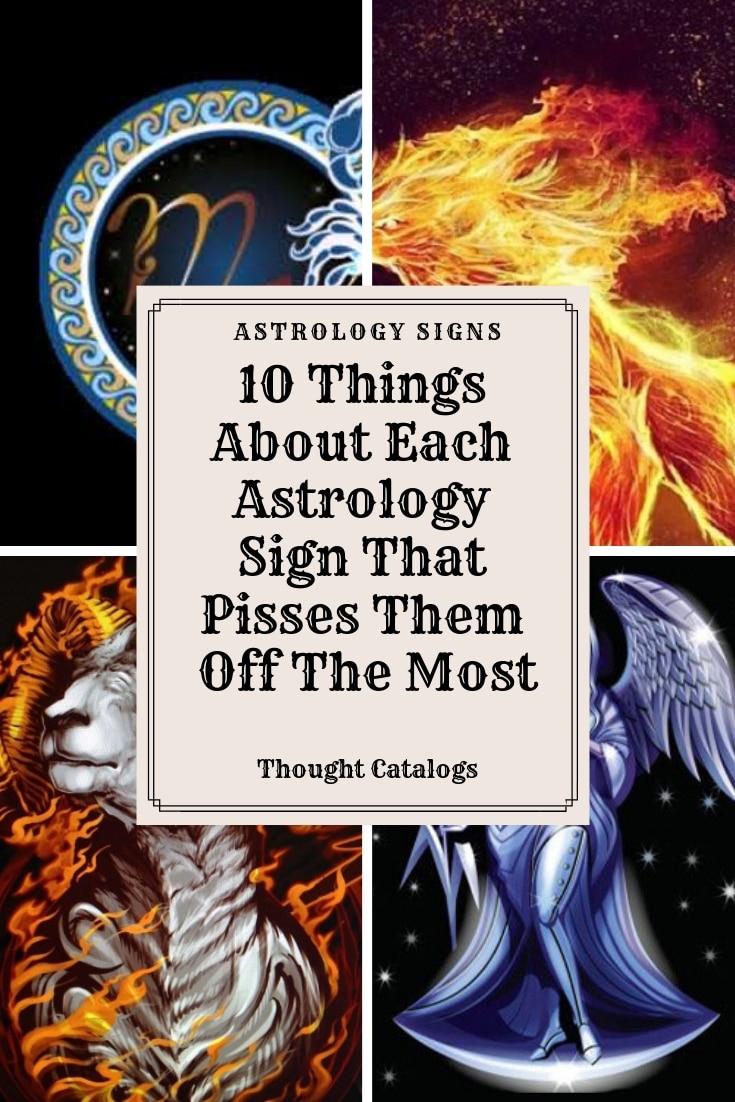 You will start the new month by experiencing many different events and news. This is a day where you should not stay in your...

I Wish You Fought As Hard As I Did, So We Would Still Have A Chance

I wish you were as strong as I am and that you had the guts to fight for me. I wish I wasn’t the...

What happens when you fall in love with your best friend

This Is How Each Horoscope Sign Expresses Their Emotions

Aries Hate to show their weaknesses to anyone and because of this they tend to turn their sadness into anger or paranoia. If an Aries...

A Letter To The Woman Choosing Between Love And Her Independence

Strong, independent, fierce and confident – you are all these things! But somewhere throughout these years, you have learned that you should onlybe that. You have...

Does Your Zodiac Sign Really Define You In October 2021?

The Personality Red Flag You Can’t Hide, According To Your Zodiac Sign

9 Signs You Have The Crazy Kind Of Love

11 TECHNIQUES VERBAL ABUSERS USE TO BRING YOU DOWN

I am a Gemini and can adapt to most atmospheres. You get two for the price of one when you are a Gemini

Hospitality making your guests feel like they’re at home