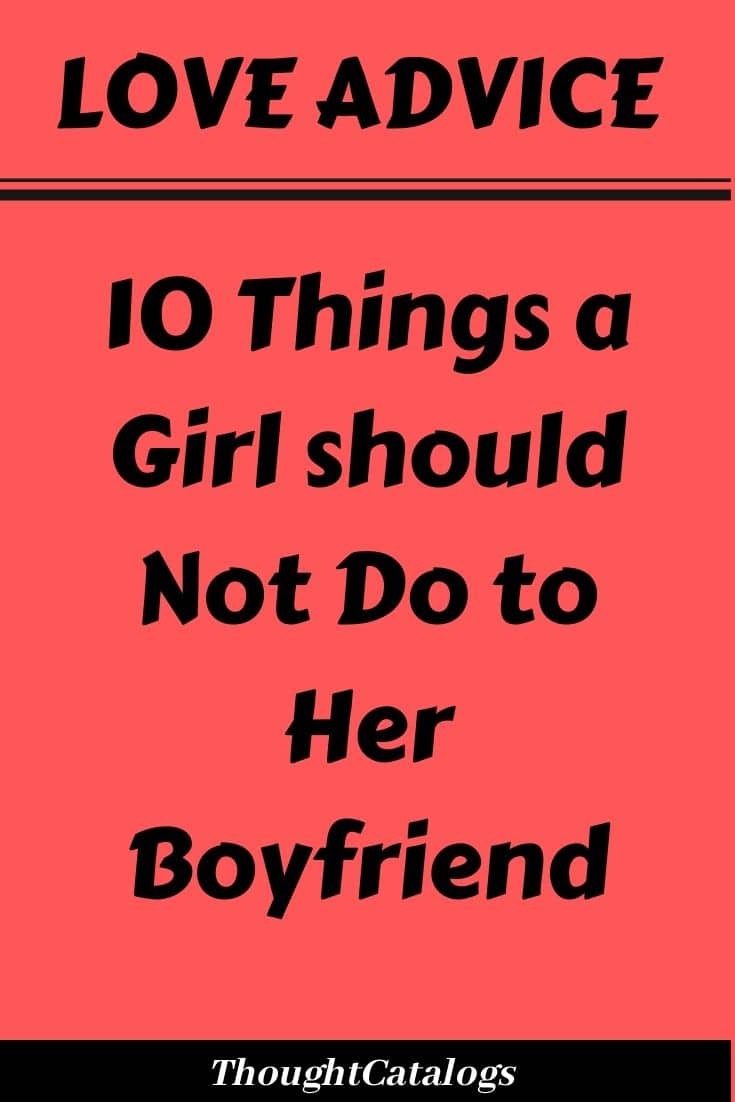 Women adore their boyfriends. They love them to bits so much that at times it becomes a little suffocating. Now, there’s nothing wrong with wanting attention and showing some affection, but you still have to keep yourself in check.

Most men don’t like bringing this topic up with their girlfriends because they are scared of the fact that they might get mad. If you know that your boyfriend tends to be more on the silent side, then it’s time to know and understand him better.

Here are 10 things a girl should not do to her boyfriend:

1. Call him every minute when he’s out.
There’s no doubt in your mind that your boyfriend absolutely loves you, but he needs to mingle with his guy friends every now and then to catch up on their social circles. A mature girlfriend is someone who feels confident, secure, and completely fine with the idea of her boyfriend going for a night out with his friends.

An immature girlfriend, on the other hand, is someone who’s very insecure, needy, and paranoid to the point that she will call her man every half hour or so to check on him. This is not a healthy trait to keep in a relationship. If you are experiencing trust issues, then you should immediately work it out with your loved one.

2. Nag him about every little thing.
Sometimes girls point out things about their boyfriends because they care about him and want to help him become a better person. There is a fine line between actually helping and being a complete nag. If you find yourself consistently criticizing your man about every little thing, then stop now.

Instead of bringing him down by checking all his flaws, why not help him up by emphasizing on the things that he’s great at? In order to help each other grow in a relationship, you need to set the positive building blocks for your partner.

3. Stop him from hanging out with his friends.
Some girlfriends are completely fine with their guys hanging out with their friends, while we have a number who are very against this. Women have to understand that while he is your man, he is not your property and you don’t own him.

Another sign of an unhealthy relationship is when one of the two is completely dependent on the other that they can’t operate on their own. Immature girlfriends may have their own reasons for restricting their boyfriends, but this will surely take a toll on the relationship.

4. Go through his things.
It’s understandable that when you are in a relationship, you have to be honest and share things with your partner. But of course, you still have to maintain a balance here and that means respecting his privacy also.

Trust your man enough to not go through his things. This means not scanning through his phone, checking his browser history, or going through his closet. Not only will this tell your partner that you don’t trust him, it will also show how insecure you may feel deep inside.

5. Use emotional blackmail.
A lot of women are notorious for using emotional blackmail. Most women do this to get what they want. It’s completely acceptable to feel emotional during a fight, but when you’re using your tears to get something you want, then it’s a different story.

Emotional blackmails also includes throwing childish tantrums when the boyfriend doesn’t follow what you want and completely ignoring him until he finally gives in. Mature women handle these stuff like a boss, talking and communicating clearly about it.

6. Jump to conclusions.
Another thing that women are also infamous for and is even considered in many stereotypes is jumping too soon to conclusions. People have very active imaginations, if you add that to an insecure and paranoid self, you’ll get a very immature girlfriend who’ll accuse her guy of almost anything.

If you find yourself to have these tendencies, then it’s best to share this with your partner. Have your boyfriend reassure you that you have nothing to worry about. Also, learn how to let go and place complete trust in others than just yourself.

7. Turn him to someone else.
Relationships are all about helping each other to develop and become better persons. Unfortunately, some women take this a step bit too far and try to control and change their boyfriends into someone else. They want their man to have every trait of their ‘dream guy’ checklist.

You have to remember that not every guy will fit into your package and that’s okay. Learn to love every flaw, quirk, or trait about him because that’s what makes him unique and perfect for you.

8. Get mad at him for no reason.
You probably have seen a lot of jokes about women getting angry at their partners for no reason at all. This may be partly true. While this may be funny to the person reading the joke, it’s not amusing at all to the other end of the party receiving the anger.

As a mature girlfriend, you should learn to keep your emotions in check. Instead of plastering a stony face and ignoring him until he picks up the clues you’ve been dropping, why not tell him face to face and actually talk about it? Remember that ignoring will get you nothing and communication is the key to every successful relationship.

9. You don’t listen to him.
Girls, men love it when you listen to them. No matter how mundane or insignificant topic may be, they love it when you lend an ear every once in a while. While men may not be known for their talkative and emotional openings, they’re still human beings who need shoulders to cry on.

It’s not all about you and if you’re a person who likes talking about yourself, then you might want to reflect on that. Help your partner by listening to him.

10. Go behind his back.
Lying and going behind your partner’s back is a big sin in any relationship. No matter what your reason may be, this is still an immature act and is very unacceptable. If you’re facing issues in your relationship, handle it like an adult and bring it up with your boyfriend.

Although some people may do this to avoid confrontation and fights in the first place, it’s always better to talk about it now and face the pain than receive an even hurtful pain later on.

When you enter a relationship feeling insecure about yourself, this will surely reflect on your relationship later on as immature acts. You can always solve this by reflecting on your actions and talking about them to people you trust.

The Unique Way In Which Your Brain Works, Based On Your Zodiac Sign

This Is How I Accepted We Were Done

One Word To Describe June 2021, Based On Your Zodiac Sign

7 Crucial Things To Know Before Loving A Girl Who Is...

ThoughtCatalogs - June 26, 2019 0
Once you meet a girl who is loyal to a fault, you can’t believe that someone as special as her has walked into your life. At...