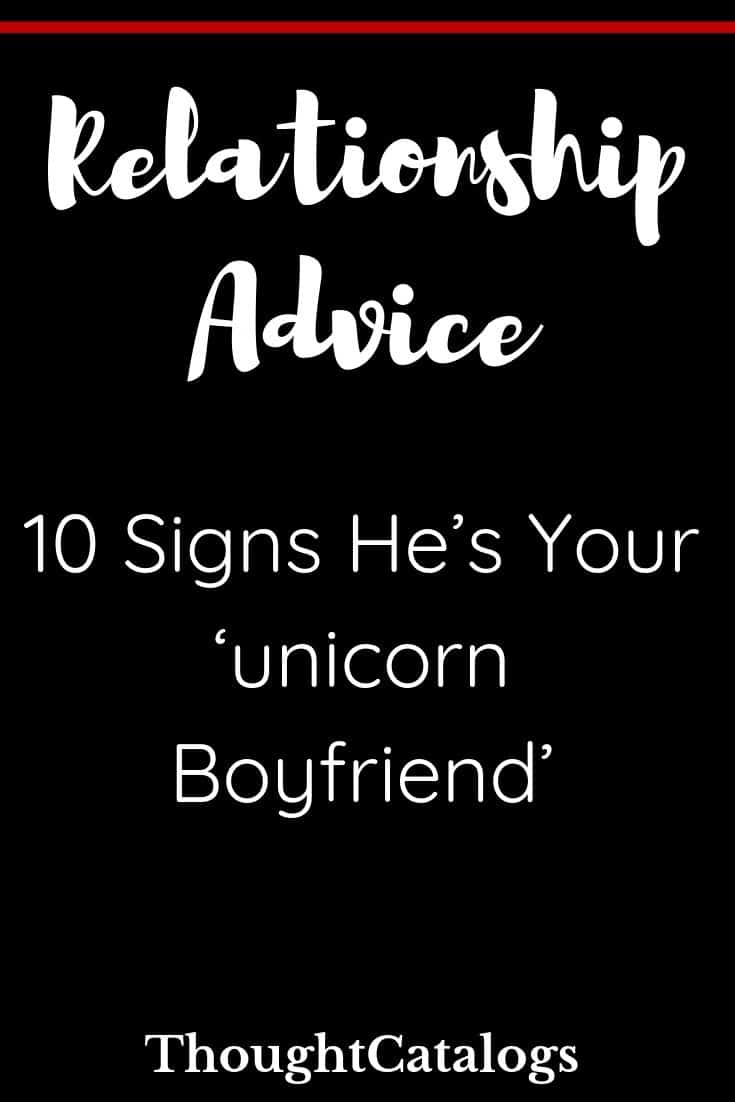 Unicorns—mythical creatures who live under a rainbow. Ring a bell?

Isn’t this exactly the same as a nice and caring guy, not a complete douche, not an immature mama’s boy, just a regular guy searching for someone to love and treat right?

Aren’t we all in pursuit of this one of a kind guy who has, indeed, become as realistic as a unicorn?

Someone who treats us the way we deserve, someone who answers our questions directly without playing games. A man who doesn’t have a ‘bad boy’ mask on, who does whatever the hell he wants with the excuse that he lives his life on the edge.

Someone who is not a complete asshole. Someone who actually gives a damn about you.

Well ladies, your ‘unicorn boyfriend’ is the total opposite of men described above. He is a rare and precious creature who you should cherish and never let go of.

This is your ‘unicorn boyfriend’

1. He hangs on to your every word

He listens. Period. Isn’t this enough? The man is actually interested in what you’ve got to say. The man actually respects you and your opinion.

He is not tossing you aside and pretending to be the man in the relationship by trying to shut you up and pretending he really cares about what you have to say.

He doesn’t wait for you to finish talking so he can say what he wants.

That’s not his style and there is nothing in it for him. He doesn’t play games because he is not a boy. He is a smart and mature man who deals with problems in a grown-up way.

There is no chasing, no lying, no jealousy-provoking. There are just two people, ready to be in a relationship together, solving problems like adults.

3. His words mean something

He is not making empty promises. If he can’t keep a promise, he won’t make one. Nothing he says has a hidden meaning because he is transparent. He has nothing to hide.

His words are honest and true and most importantly, they mean a great deal. A ‘unicorn boyfriend’ will never let you down. If he promised you something, and his plans get in the way, he will cancel them all because he doesn’t want to let you down.

He won’t provoke fights and problems. He’ll never provoke you over something insignificant. Whenever there is a problem, he will face it maturely and pull you aside to talk about it.

Making scenes and publicly shaming you just because he is angry is not in his nature. Nothing is that important that it can’t wait for you to be alone to discuss it. Then, he’ll listen to you calmly and try to solve your problem reasonably.

You’ll never hear him making up wild stories and saying crazy ideas. When you’re dealing with a douche, there are always excuses and every time something surreal happened, and every time it wasn’t his fault.

No, there is no ‘but baby…’ in his vocabulary. He’ll never blame you for his problems and make up excuses that somehow end up meaning it was all your fault, that you should have treated him better. But since you didn’t, he didn’t have any other choice than to contact his ex. He was lonely. Boo-hoo! Your unicorn doesn’t do this.

6. He treats all women with respect

Just so you know, he is not this way only with you. He treats all women like this. So, don’t think that because he loves you and wants to spend the rest of his life with you are the reasons why he treats you well.

He is that kind of a guy, that mythical creature who treats all women with respect, whether related or not related in any way. And yes, this man is real.

8. He always makes you laugh

Maybe he isn’t even that funny but he is the funniest man alive to you. He can always put a smile on your face, no matter the situation. You can be even angry with him and he will still make you smile.

He is the guy you want to have by your side in all crazy, stressful situations. He never panics because he uses his reason and keeps his cool when he has to.

As long as you have him by his side, you don’t have to worry. You’re his life and he will treat you accordingly.

Why You Just Can’t Let Go (In One Sentence) This June 2020, Based On Your Zodiac Sign

16 Tell-tale Signs That You’re With An Insecure Boyfriend