Sometimes we’re so fixed on searching for ‘signs he likes you’ that we fail to see the huge, red flags glowing in the dark. We fail to see that he is a total, manipulative asshole whose biggest fun time is torturing you and turning your life into a living hell.

It’s frustrating to face the fact that all you’ve wanted was someone to love, someone who loves you back and you’ve got a manipulative, immature, toxic person who feeds himself with pain and suffering.

You’re his supply, he needs you, so he manipulates you into staying.

I’ve been through this hell and thank God I managed to run away from it. I dumped his sorry ass and went no contact. I don’t want to know whether he is alive or not. I don’t even want to know if he misses me. That’s how little I think of him.

I went through all of this but there is something I learned after all. No matter what kind of a relationship you’re in, a guy will play with your emotions if he wants to. You can think he loves you to the moon and back but it can all be just one, big, fat lie.

Signs he’s playing with your emotions

1.  Your relationship is changing for the worse

Instead of meeting his friends and family, he’s keeping you a secret. Your relationship should have gone to another level by now. Instead, it’s decreasing in quality. He isn’t asking to spend more time with you, he seems to be getting away more often.

All of these are signs that he is not serious about you and he is just using you for a fun time. He is not taking your emotions into consideration because he doesn’t care about you.

2. He does things that upset you

You were upset about something he had done and you confronted him. You told him that he acted rudely and that he hurt your feelings but despite the fact you opened up to him and you showed vulnerability, he still does the same thing.

He still hurts you the same way. He does this because he doesn’t care how you feel. He is playing with your emotions and he doesn’t feel sorry for you.

3. He’s not that available anymore

This right here shows you how much he’s interested in being with you or in a relationship. At first, this wasn’t an issue, you were only starting to get to know each other. But as you spent more time together, he wanted to spend less time with you.

Usually, he uses some lame excuse as to why he can’t come and see you, he cancels dates last-minute and he has slowly distanced himself. He is not around that much anymore and you are slowly losing the feeling that you are in a relationship.

4. He is interested in you when you’re not there

When a guy is playing with your emotions, he has one tactic that is perfect to keep you around. When you are next to him, he won’t give you the time of day. He’ll push you away from him and he’ll try to see you as little as possible.

But when you take the matter into your own hands and you distance yourself from him, he will call you all the time. If you’re out with a friend and you hadn’t announced a week earlier that you were going to be, he will bomb you with texts that he misses you and wants you by his side.

These men do this because they don’t want to let you out of their grasp that easily. They don’t want to be with you but they still want to have you as an option, so they give you enough attention to keep you hooked.

5. He shows interest in other women

He is proving to you that he doesn’t care about you or respect you. Him flirting with other women is just proof he is playing with your emotions.

6. He makes you feel you’re not good enough for him

Around him, you feel you’re not pretty enough or that you’re not smart enough. This is not on you. You wouldn’t feel that way if he didn’t treat you that way. His snarky comments and his mean jokes are killing your confidence in a second.

He sees that as having fun because it makes him laugh. He doesn’t care that the things he says are not even the slightest bit funny to you.

7. He is perfect when he needs something from you

When you are the only person who can help him, he is the official winner of the ‘boyfriend of the year’ prize. He’s there for you, he supports you, he listens to you, he basically does everything that a normal boyfriend should do.

And once he gets what he wants, he shuts you down again because he’s done with you. You’ve given him what he needed so he can continue to treat you like shit.

8. Sending mixed signals is his thing

He is the absolute king when it comes to this. No one can beat him or act nearly as sneaky as he does. One day you’re his world, his love, his everything and the next he is capable of walking by you in the street without even saying hello.

This emotional roller coaster causes emotional pain which can easily turn into real physical pain. You can literally get sick from the constant emotional abuse, terror or his indifference.

9. He expects you to be forgiving

He can get away with everything but you don’t. His double standards are ridiculous. When he doesn’t call you for days, he doesn’t show up on a date or doesn’t text you back, you’re supposed to let it slide and forget all about it after his pitiful ‘sorry’.

But when the situation is reversed, when you are the one who takes the liberty to act like him, like a dirtbag, then all hell breaks loose. He calls you, he goes out looking for you and he makes a scene. And God knows how long he will be mentioning that one ‘fallout’ and rubbing it in your face while he is doing the same thing.

He’s capable of lying about everything—his past, about what he’s doing, he’s even changing some facts about him so people would like him. He is a manipulator in disguise. 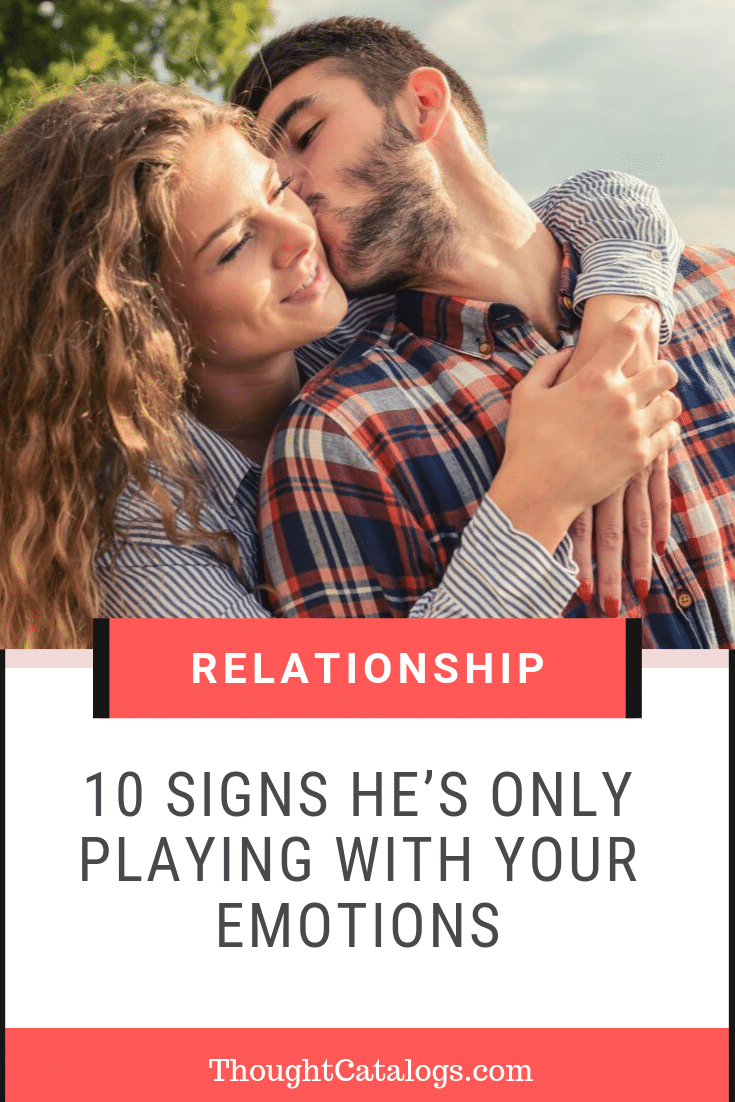 4 Things Your Girlfriend Wants But Will Never Ask For

8 Texts You Receive If You Have An Awesome Boyfriend