These things are not so “harmless” after all!

The gender wars have yet to subside and there will always be a fair amount of irreconcilable differences between men and women. Yes we can learn to love each other and coexist despite our differences, but the differences will still be there and there’s no avoiding them. Men and women have tendencies to take different perspectives on situations and issues as a result of their upbringing and that’s perfectly normal.

A lot of times, conflict arises out of miscommunication. There are just countless instances when men think they’re saying one thing, but women end up hearing something entirely different. Here are just a few examples of harmless things that boys should stop telling their girlfriends.

In the midst of a heated argument, there is a high probability that at least one of you will blow-up. When it’s the lady who goes off, gentlemen, refrain from telling them to relax or chill. That will just ignite a whole new level of destruction that you don’t want to be on the receiving end of. When you tell ladies to relax, no matter how sincere you are, to them, it just sounds like you’re not taking them seriously.

It may not be a big deal to you, but saying this out loud can spell doom for you in the long run. If she’s upset about something, then it’s obviously very important to her, and when you dismiss her, then it makes her feel like she’s not important to you. Don’t dismiss her quirks and queries because it’s important to her that you find her thoughts important as well.

4. My ex would have never reacted this way.

Oh no. You did not just go there. Bringing up your ex in the middle of a disagreement or an argument is just out of bounds. That’s something you should never do. While you just want to innocently point to an example of sanity, your ex should never serve as that example. That’s foul play and it’s going to send your girlfriend into a world of undeserved hurt.

5. Are You Not Feeling Well?

Yes, you think you’re being sweet by showing an interest in her well-being right? Just be careful though. She might take this the wrong way and think that you see her as a disgusting slob. Questions like this will put down her self-esteem and probably make her sicker than she already is.

EMERGENCY! CAUTION! Never group these words together in front of a woman. While you do feel like you just need a break and some space for yourself because life’s stresses are taking its toll on you, the girl will more than likely end up blaming herself for your stresses.

You should also check  If A Guy Does These 5 Things, He’s An Emotional Psychopath

When you’re really not mad, your girlfriend will know it. Ladies tend to be more empathetic and they can always tell what you’re feeling at any given moment. There’s no point in saying I’m not mad. to her just to stop a discussion or to dismiss your feelings. To her, hearing you say this will make her feel like you’re just not willing to express what’s on your mind because you don’t trust her to understand where you are really coming from.

8. You have a really huge butt.

Men. No. Just don’t. We know you like big butts and you cannot lie, but women will take this the wrong way. They’ll think that you’re calling them fat and that’ll just upset them. In this case, a compliment is not serving the purpose that was intended.

Just stop. When you say this, you’re basically just telling your girlfriend that she’s being crazy and paranoid. Try to meet her on a level of empathy and see where she’s coming from. She may be acting a little crazy from time to time, but calling her crazy will not help appease the situation in any way. Instead, try to approach things rationally and in a gentler manner.

Even though you really couldn’t care less about a haircut she gets, or a piece of jewelry she’s getting, you really have to make an effort to actually care. Lie if you have to. It might all be the same to you, but to her, it makes a world of difference. Tell her that her hair has never looked better, tell her that she looks better with gold, or tell her you like the red dress more. These are simple things that could go a long way. 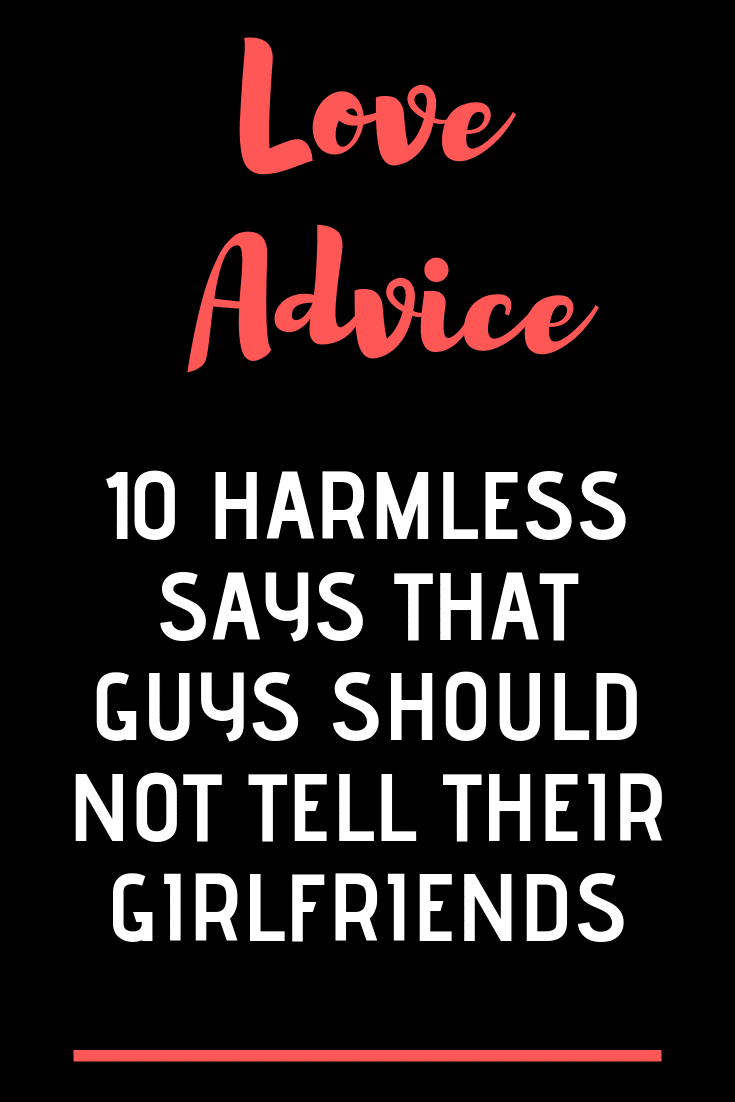 Oh Wow ! These 26 Such Like Phrases that guys Used To Say