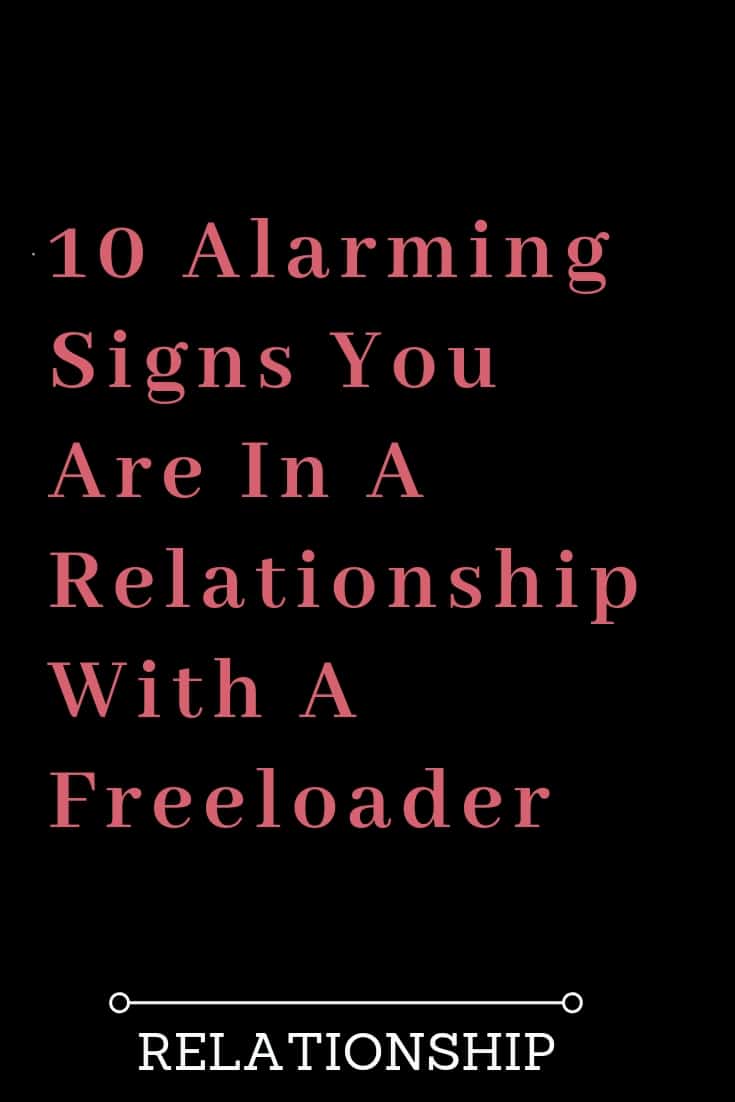 The tricky thing with a freeloader is that you can’t detect him at first. He will put on a charade until you are head over heels for him and then subtly reveal his true face.

The charming man who would do anything for you suddenly starts to change. All of a sudden everything is hard on him and he lets you do, well, basically everything.

All he does now is take, take, take as much as he can.

Even by definition, a freeloader is ‘… a person who takes advantage of others’ generosity without giving anything in return’. Google Dictionary

Does that sound anything like your significant other or perhaps your ex?

Take a look at the signs and find out if there is anything to be alarmed about:

1. He forms an attachment too fast

He doesn’t have the time to build a relationship. After a few dates, he will tell you he cares about you already or even that he loves you.

He will tell you that this never happened to him before with any other woman and that you are special. Before you know it, he will continue his tales of commitment, marriage and even go on to naming your children.

His words are never sincere, they are just a means to an end. He wants to hook you in his web of lies so that he can exploit your generosity.

2. He wastes his days

He is unable to hold on to a job. Something unexpected and improbable always happens.

When you get home from work, you find him still sleeping or staring at his phone while everything around him is a mess.

What he likes the most is watching a season of his favorite series, playing video games, running a movie marathon or hanging out aimlessly with his friends.

Let’s face it, this is not how a real man behaves. This is a clear picture of a freeloader who is only going to fail in life and take you with him.

3. No matter what you do or how hard you try, he makes you feel like it isn’t enough

He always finds a way to spin the story around and make you feel like you are the one to blame for all of your problems.

Even if he admits blame, he will say that you are not all that innocent in any of it either and make your mistakes ten times bigger than they really are.

He is doing all of that just to have you under his control and manipulate you at his will. Freeloaders have mastered emotional manipulation to a T.

4. You can’t rely on him to do anything he said he would

You never know where his ‘busy day’ will take him. He might not pick you up from work on a rainy day because he is too busy lying on the couch doing nothing.

He might tell you he will run an errand for you but something will suddenly come up. More similar and even worse scenarios are probable.

The bottom line is that he is lazy, irresponsible and you can’t depend on him to do squat.

5. Nine times out of ten, you are the one who takes care of the bill when you are out on a date

There is nothing wrong with splitting the bill or paying for dates every now and then but it can’t be all the time.

Mainly because it drains your bank account and secondly, it’s super annoying and unfair.

He can give you tons of excuses but you will see right through his lies. What are the chances he has a financial emergency every Friday?

Can he be so irresponsible to forget his wallet each time you two go out? I think not. What do you say?

This guy is nothing more than a leech and he is exploiting you financially.

6. He has a habit of borrowing money from you

In the beginning, it will be a few bucks he says he will return as soon as possible. After that, the amount will be higher and before you know it, he will stop returning and you will never see your money again.

You know he is earning enough to pay you back, he is just so cheap that he doesn’t want to. He won’t mind taking from you but when it comes to giving back, he won’t be so willing.

7. He still lives with his mother

Well, if a man is still living with his mother, that might be just a temporary solution until he gets back on his feet or finds a better job.

But if it has already been a few years now or if you see that he isn’t doing anything to change where he is at… be alarmed, be very alarmed, because this guy is never leaving Mommy Dearest and he is probably counting on his parents for financial support for the rest of his days.

8. You guys live together but you are the one paying the rent

This is an example of a freeloader at his finest. He has no problem living with you and acting like the place is his without giving a cent to help you out.

Buying groceries, vacuuming the apartment, doing the dishes, cooking meals, taking the garbage out, etc., is still mostly up to you because he doesn’t feel like doing anything.

9. He is a deadbeat father

If you have a child with him, you probably feel extremely exhausted. He can’t even pick up his own child from kindergarten, let alone pay for it.

All the financial, physical and emotional attention a child requires comes from you, while he plays with them every now and again.

10. He dreads the idea of the two of you breaking up

If you even mention breaking up with him, he will turn the story around, he will make promises of change.

He might even cry and beg you to give him one more chance.

On the one hand, he might be genuinely sorry and see that he is headed down the wrong path.

But the more likely scenario is that he doesn’t want to lose his sure source of additional income.

He doesn’t want to lose your emotional support or someone willing to put up with his crap either.

After reading this, you will see that just one of these signs is enough to show you whether your man is a freeloader or not.

If a few signs hit alarms in your head, well, then there is no doubt about it, you are dating somebody who is using you big time.

If you recognize him in a few of these signs, wave him goodbye without hesitation.

He is nothing more than a leech who will drain you and not just financially but physically and emotionally too.

You Never Get Over Losing A Loved One, You Just Get Through It

This Is Why Setting High Standards Is Important For Your Relationship

Signs She Is Flirting, Based On Her Zodiac Sign

Never Change For A Man Unless These 5 Things Start Happening